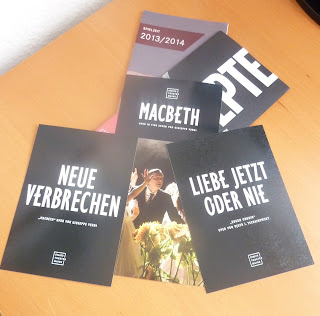 Well, Gentle Readers, I've survived an international move, mostly gotten over jet lag, and sort of figured out the local public transit system. This means, of course, that it's time to figure out the local opera schedule. Fortunately, the Staatstheater Mainz has day-of half price tickets for all students. They also have those sleek, libretto-quoting postcards you see on the left. I have to say I prefer them to the "Look at this exotic thing!" advertising I've received from opera companies in the past (ahem.) Mefistofele and Macbeth are on the program for this month, so lots of exciting orchestration is hopefully in my future. The orchestra itself has an interestingly varied program, ranging from Buxtehude to Cage and beyond, so I may explore their offerings as well.

Neighboring Wiesbaden is giving Der Fliegende Holländer this month, and Oper Frankfurt also has great discount offers, one for frequent opera-goers, one for the under-30 crowd. My only problem with the latter (cheaper) one is that it assumes I would be usually going with someone else. Sigh. Maybe I should send an e-mail: "Dear Frankfurt Opera, I am not only perpetually single, but a stranger in a strange land; may I have your discount card anyway?"

Meanwhile, in New York, here are a few of the things I'll be missing:

Operamission's evening with Antinous and Hadrian, a new work by Clint Borzoni. I've heard snippets of and conversations about this, and so would be interested even if it weren't based on one of the juiciest melodramatic scenarios in Roman imperial history. (No, I don't say that lightly, and yes, I do know there's tough competition.)

The U.S. premiere of Turnage's Anna-Nicole at BAM. Capital-E Event, and a work provoking such passionate and diverse responses that experiencing it for oneself seems almost a must.

The Met opens with Eugene Onegin (watch for socially-conscious program notes; I think celebrating this work by a composer currently so selectively remembered by Russian officialdom would be great,) continues with Cosi (give a welcome-back cheer to Maestro Levine for me,) and continues still further with a revival of The Nose, which I think is one of their best current productions. The dystopian comedy of the work itself is all too topical.

Gotham Chamber Opera's Baden-Baden 1927 doesn't open until October, but you can order gala tickets now, and regular tickets go on sale soon. Don't miss this Weimar Republic fabulousness.
Posted by Lucy at 6:15 AM