La hija de Rappaccini: Opera in the Garden of Good and Evil

Gotham Chamber Opera has made a specialty of presenting unusual opera in unconventional spaces. Their production of Daniel Catán's early work, La hija de Rappaccini, creatively uses modest resources in the luxurious setting of the Brooklyn Botanic Garden. The libretto is both more profound and more enigmatic than the Hawthorne story that forms its original source material. Juan Tovar, working from material by Octavio Paz, crafts an elliptical parable about humanity and nature, about humanity and the divine, which asks at least as many questions as it answers. The biblical imagery in which it is steeped was not always reflected in the surtitles. The last thing we need may be one more operatic heroine whose "tragedy is also her transcendence," to quote Gregory Moomjy's program note, but the eponymous Beatriz possesses a dignity and clear-eyed wisdom which are at least some consolation. This run of performances is given in a reduced orchestration by the composer of his 1988 opera.. Two pianos, timpani, and harp create an eerie soundscape, their knowledge of events and emotions often preceding that of the characters. The characterization through the score is also very strong, and as the passions of the principals set them on a collision course, the orchestra expresses their doom and sympathy with their doom. Gotham's musicians (including Andrea Puente Catán on the harp) were led by Neal Goren in a strongly atmospheric performance.

Morningside Opera is currently performing a run of ¡Figaro! (90210), an opera consisting of a rearrangement of Mozart's Nozze score to a libretto by Vid Guerrerio based on Da Ponte's. Guerrerio's vision for the updated plot results in substantial cuts, an addition (fleshing out Cherubino and Barbarina's relationship) and some reordering. Its earnest determination to comment on and satirize the opera's themes of class conflict and exploitation (and friction between genders and between generations) leaves less space than the original for whimsy and for psychological development. The libretto is often clever, and sometimes incisive, especially in Figaro's music (the critique of unbridled capitalism and white privilege in "Aprite un po' quegli occhi" is nothing less than brilliant.) To my mind, however, it was somewhat overladen, making it a little less than the sum of its parts. Still, it's an interesting experiment in what seems to be a growing trend of transladaptation (compare a Toronto take on Nozze, or Peter Brook's truly magical Flute.) In this performance, the score was arranged for string quintet and piano with surprising success. Music director Raphael Fusco led from the piano, and the phrasing and internal contrast between the instruments were both handled admirably. The cast of singers had good rapport with each other, and turned in a creditable collective performance, with Carlos Monzon a standout as the charismatic Figaro.

While I like Kenneth Branagh as a director, love Mozart (obviously,) and have a thing for First World War dramas, I wasn't sure what to expect of the confluence of these three in Branagh's 2006 film of The Magic Flute. Frankly, I was a bit dubious as to how the unwieldy drama and sublime music would be adapted to an alternate history of the Western Front; but in the event, I was won over. The film is unapologetically whimsical, even absurd (to an extent I haven't seen Branagh indulge as a director since Dead Again

; here its sheer exuberance recalls Buster Keaton routines.) It's also, however, tender and thoughtful; it doesn't confront very seriously or for very long the historical horrors on which it's loosely based, but this is because of its irresistible sincerity of belief in the fact that love does, in fact, conquer all. In Sarastro's vision, there might just be a way to break the cycle of "war to end all wars," and make peace. That this is Sarastro's vision is not at first clear--one of the things I liked most about the production is that it kept me actually guessing as to the characters' motives, and as to what would actually happen to them. Stephen Fry's transladaptation (to borrow a term from Definitely the Opera) of the libretto is sly and sure-handed, eliminating much of the racism and misogyny while cleaving closely to the German vowel sounds, and the musical values are solid. James Conlon leads the Chamber Orchestra of Europe in a lively and nuanced account of the score, sensitive to the emotional journeys of the characters. (There are some cuts, but the only substantial ones to the spoken dialogue.) Joseph Kaiser's Tamino (more likable than most within the first 60 seconds) and René Pape's Sarastro were vocal and dramatic standouts, but the singing was fine all around. I don't mean this as damning with faint praise; on my home speakers, the recording had a tendency to flatten singers' sound, so it was difficult to evaluate the sound they were actually producing. Still, the singing was on the whole musically intelligent, as was (notably and commendably!) the direction. The way the film was shot was itself interesting, with creative camera angles and color palettes, and also related well to the music, I thought (if occasionally succumbing to literalism.) Opera and film being vastly different art forms to begin with, I thought Branagh's gleeful creativity with the latter medium provided a good argument for adapting the former to it. Affection for both Mozart's opera and the possibilities of film animates the endeavor, which I found unexpectedly winsome and touching. The network of theaters screening opera opened the way for its belated U.S. premiere; for showings go here.

I went to Saturday's concert with the New York Philharmonic for the sake of Luigi Dallapiccola's rarely performed Il Prigioniero, but ended up being entranced by the Prokoviev violin concerto which preceded it, as well.  Alan Gilbert and his orchestra were on very fine form. The degree of subtlety which they achieved in the concerto, and the sheer variety of orchestral textures in the opera, both were very impressive. I thought the latter might have used a little more dynamic restraint, but I don't know the score, and the overwhelming quality of the fortissimi may have been just what was called for.

Prokoviev's first violin concerto is singularly lovely; in this performance, it also registered as uneasy and elegiac. Its unusual form and unusual melodic patterns seemed to be gesturing towards an inarticulable truth. Lisa Batiashvili played with clarity and, in the first and third movements, with a haunting, remote melancholy of tone. Within the melancholy of the first movement she found extraordinary nuance, using the melodic progressions to move from near-anger to reflection sensual and sad as a rainy day, expressing questions of hope and fear. The strings supporting her were soft and smooth, the winds skillful and sympathetic in their echoing of the solo line. Gilbert emphasized the aggressive plurality of conflicting orchestral voices in the scherzo, with malicious pizzicato strings, wild winds, and dangerous brass. Batiashvili too embraced the unsettling mischief of the movement, varying her bowing technique, sometimes sweeping or bouncing against the strings, sometimes playing with almost delirious fluidity. Against the driven rhythms of the strings, the anxious questioning of the woodwinds, the plunging brass in the third movement, the dreamy romanticism of the solo violin wins an improbable victory. The intensity of the opera, in the second half, was of a different nature. 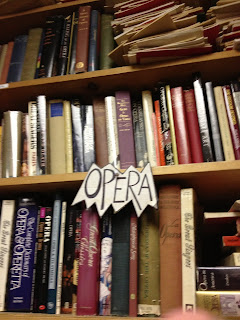 I'm not quite sure why it took a cloudburst and a spare half hour before a performance to drive me into Westsider Records, as this pleasing warren of dusty shelves is barely a stone's throw from the Met. Once there, I browsed over the CDs, regretfully passed by the LP selection (taking out Fischer-Dieskau in Reimann's Lear for the sake of handling it) and found my way to the helpfully-labeled shelf of opera books. Now I confess, Gentle Readers, that I have a weakness for opera libretti. They're so useful! So cheap! So slender, and easily squeezed onto overladen shelves! The fun of unearthing them from secondhand stacks like the one pictured is a bonus. All this to say that I climbed up on a conveniently located bar stool and, having admired representative samples of roughly a century of libretto design, triumphantly carried off several additions to my collection.

A Tristan libretto fills a lacuna in my Wagner collection, and I found the Art Nouveau design irresistible. 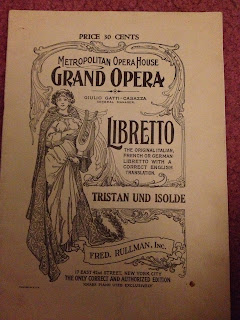 I purchased a Lucia di Lammermoor libretto in the same style primarily for the sake of this full page ad: Nicely done, Knabe Pianos. 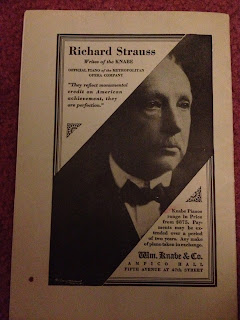 My discoveries then skip several decades, to this stark (and purse-sized!) 1961 Peter Grimes. 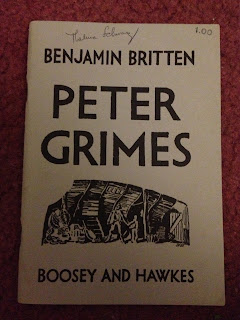 Later in the '60s comes this: a reminder of the Met's touring company, with a long description of how the under-construction Kennedy Center was funded and dedicated on the back cover. 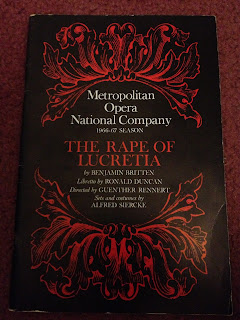 Apparently, the Opera Orchestra of New York used to provide commemorative libretti at each of its performances! Not a few of these have found their way to Westsider Records; most of them seem to have been underwritten by Rolex. Some of them featured a photo of Eve Queler on the cover; some, like this one, had a design inspired by the opera in question. This sleek edition of the sublimely ridiculous La Gioconda libretto was too good to pass up. 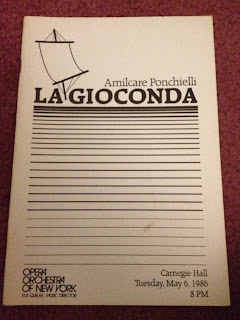 I need to do further research to find out what year saw this gala performance of Tancredi... with Marilyn Horne! 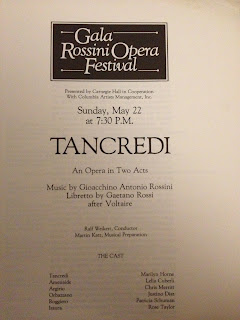 Last but not least, a libretto from a performance of the too-rare Freischütz in the NYPhil's anniversary season under Sir Colin Davis' baton. 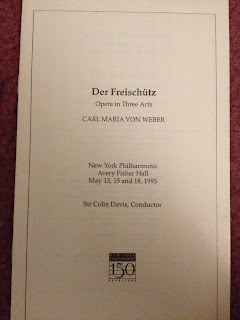 Really, it's a good thing I'm moving soon, or who knows what else might follow me home.
Posted by Lucy at 1:18 AM 2 comments:

The InsightALT festival of masterclasses, symposiums, and opera performances concluded on Monday with La Reina, a dark, sensual opera for which I'm tempted to coin the term neo-verismo. Composed by Jorge Sosa with a libretto by Laura Sosa Pedroza, the opera was heard in a "first draft" version scored for piano and electronics; the eventual scoring is planned for chamber orchestra and electronics. Mila Henry was the able and energetic pianist; Andrew Bisantz conducted, holding all the elements together, and impressively realizing (I thought) dramatic tension and musical nuance. Sosa named his greatest influences as Saariaho and Messiaen, but I couldn't help hearing this lush, varied score and shamelessly melodramatic plot as reminiscent of Puccini. The opera's topical relevance was singled out twice for praise in the talk-back session (and by opera-goers decades older than I.) I was glad to have this evidence--as well as that of the enthusiastic, even rowdy audience applause--of excitement for a new opera that creatively engages and comments on a complex social problem. The score is rich, allusive, and even playful; the use of musical motifs helps clarify the multilayered relationships among the often dissembling characters. The electronics, here cued by the composer, were used to create a variety of textures, sometimes providing echoes of motifs or phrases, sometimes gunshots and sirens, sometimes a deliberate, deliberately overwhelming cacophony. Sosa Pedroza's bilingual libretto, meanwhile, is vivid: poetic and gritty by turns, shifting from the clichéd language of the newsroom or the clipped exchanges of drug bosses to lyrical sweetness for a love duet, and quasi-mystical imagery for the dialogues between Regina Malverde (the "queen" of the title) and La Santa Muerte, an ominous and otherworldly tutelary spirit.