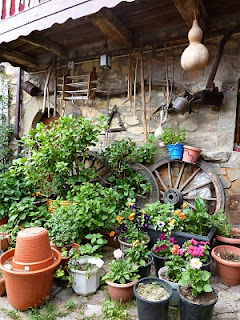 I'm still an opera review in arrears (Massenet's Manon at Rome's Teatro dell'Opera) but have mysteriously contracted consumption, or at least an illness which prevents me from being able to think clearly or having the desire to do anything, really.  However, to cheer myself up, forthwith some happy reminiscences.  One might think that a trek of several hundreds of miles through the farms and villages of northern Spain might not be the most likely place to meet opera-lovers.  And yet... I did!  Pictured above is the courtyard of a pilgrim hostel in the tiny town of Rabanal del Camino.  On this day of walking, I was a bit injured, so lagged behind and ended up falling in step with Claudine, a retired French nurse with whom I ended up discussing life, death, botany... and opera!  In her retirement, she is taking Greek and singing lessons (impressive!)  So we sang together, a French pilgrim song she taught me, and then (with mixed success on remembering the words, but with gusto!) the Habanera and Seguidille.  We also discussed how much we like Cecilia Bartoli, of whom I attach a video because one can never have too much Cecilia Bartoli.
Read more »
Posted by Lucy at 9:23 AM No comments:

I admit, it feels very strange to be back in the Bronx, in front of my laptop. This was, of course, the first thing played on my stereo this morning (returning to New York last night, I did little more than drink water, take a shower, and collapse into my own sheets.)

The Camino de Santiago was beautiful. In the event, the choice to take two weeks to become gradually re-accustomed to cities, large numbers of people, and motorized transport proved most fortunate. It seems very strange to think, on the one hand, that the time of walking took only just three weeks; but it also seems strange to reflect on how much has happened in the world, and the various communities I left behind, in that time.

The concept and practice of pilgrimage shelters a number of strange ideas and strange practices. I do feel that I had many experiences which can be communicated only with difficulty, if at all. But although there was much about walking the camino that seemed mystical, and the transcendent came in unexpected ways, it also felt like the most natural thing in the world. I'm already feeling as though I'm sounding either sententious or impenetrable, or possibly both. So I'm going to stop writing and post some pretty pictures.