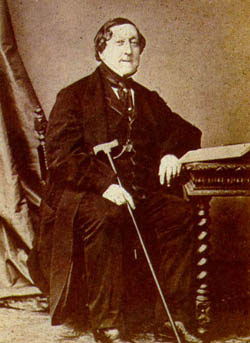 I was rescued from the doldrums of a rainy Friday by the generosity of Taminophile, who magnanimously made it known that he had a spare ticket to Rossini's Petite Messe at Lincoln Center.  I jumped at the chance, and had the very great pleasure of--finally!--meeting the charming Taminophile, discussing bel canto, and listening to Rossini! I have conscientiously not read his blog post on it yet, but you all should (not only is he charming, but he knows a lot more about Rossini than I do.)  My homework on the 1863 piece--which, although I'm familiar with movements from it, I don't think I'd previously heard in its entirety--was facilitated by this Philip Gossett article, so I could appreciate it without feeling too clueless.  And it was exquisitely lovely; I'm at a loss to know why it isn't more often performed, especially as Rossini's original call for twelve singers would seem to be well within the reach of any church with a well-developed music program.  There were, I admit, a few moments where I had to remind myself that repetition and embroidery are key hallmarks of the Rossini style, and I just needed to sit back and relax and bask in it.  And bask I did.

I've been keeping my nose to the academic grindstone this week, but succumbed to the blandishments of the advertised Spring Vintage event at the New York City Opera's thrift shop, and headed down for a look around. Now, I'll admit that I feared that what were advertised as "unbelievably low prices" on vintage Dior, Yves Saint Laurent, Missoni, etc., and prices in any way approaching approachable for the graduate student's budget might be poles apart.  But I went down, and lo! I found the promised land of thrift shops. 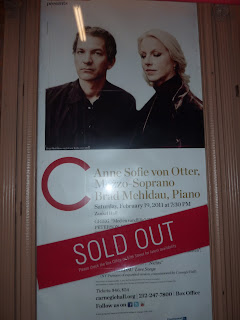 I must begin this post with an apology, Gentle Readers: I was not the ideal audience member for Anne Sofie von Otter's Saturday night recital.  I thought I was prepared: I was in a good humor, well- but not overfed, and feeling prepared to be attentive and discerning.  I was bowled over.  So inadequate, indeed, was my own reception, that I debated long about blogging this at all; but, confound it, I paid a real-people price for a good ticket because I decided that I couldn't forgive myself for not going to this recital, and I went, and I listened, and I was moved, and I'm going to record it.  Badly.  This was the video, found on Carnegie Hall's website, that contributed significantly to my decision.  If this gorgeous, charming woman had taken ages putting together a recital, it would be positively discourteous not to go.  And what might I be missing if I did?

Had I been actively seeking an antidote to late winter doldrums, I could have done no better than the final afternoon of Donizetti's Don Pasquale at the Met.  In the hands of the delightful cast, it becomes a gentle, affectionate send-up of Italian operatic conventions, as I suspect Donizetti intended in 1849.  In support of my thesis that Donizetti meant the joke, I cite the dramatis personae, which after listing the four principals says merely - A Notary.  All you need to know is that there will be a notary.  He is, of course, not a notary at all, but Malatesta's cousin, and I suspect he wore Danielle de Niese's notary outfit from Così fan tutte.  Typically demure soprano virtues are catalogued and then parodied wildly in the person of the feisty Norina, the tenor is not the most intelligent young man in the world but takes himself very seriously, the baritone is suave, and the bass doesn't know what's going on.  I am not entirely sure that Otto Schenk's production, an Italian idyll awash in Mediterranean pinks and golds and shabby charm, is in on the joke.  But it works as part of it.

I presumed that the ominous front-of-curtain appearance of a man in a suit was merely to echo the slips in our programs which said Anna Netrebko was indisposed.  No: Joseph Colaneri would be conducting; James Levine was ill.  Colaneri's reading of the score was bright and sprightly; there were a few issues of balance at the outset, but the orchestra was allowed to shine, and they performed with their customary excellence (I love you, cellos!)  The chorus didn't have a great deal to do, but they milled, tidied, and pronounced dolefully on the topsy-turvy household with great aplomb.  Regarding the principals, I have to add my voice to the universal acclaim they've garnered. 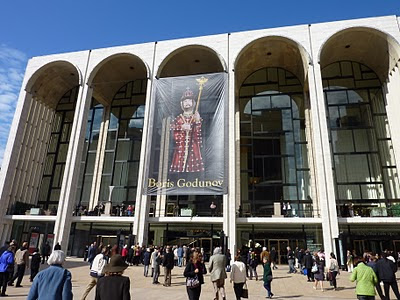 Brace yourselves, Gentle Readers, for my own two cents on the Met's Wednesday announcement.  The Met's process of getting all the information out has been much faster than I remember last year's being: in addition to the press release, the interactive brochure is already up on the website, together with a complete listing of next season's operas where patrons and subscribers can buy tickets (not to mention the fact that they live-tweeted the press conference.)  Whew!  Ventures into new productions are both (apparently) relatively tame, and anxiously justified to the audience.  There are some borrowings from ENO--McAnuff's Faust (hmm) and Pelly's Manon (ooh)--and some actually new things.  Lepage's Picket Fence of Symbolism returns for the remainder of the Ring, now with 3D projections.  Discussion of Mr. Lepage's interpretative stance on the drama is conspicuous by its absence.  I am concerned.  David McVicar wants to do an Anna Bolena that explores the psyches of the Tudor court, does scene changes without dropping the curtain, and has Holbein-based costumes.  I am so there!  I have very little sense of what Michael Grandage's Don Giovanni might turn out like.  But it's Don Giovanni, and it has a quite promising cast, so I'll be there too, with a large gang of Mozart-loving friends.

So, as last year, my anarchically-ordered list of Things I Am Most Excited About.  So far this season my predicted and actual high points have been fairly close together (although I left Pelleas out of the prediction altogether.  Oops.)  Let's see how I do this time.

From Vision to Inheritance: Nixon in China at the Met I wasn't sure what to expect from Nixon in China, as most of the press coverage I had read beforehand focused on the opera as event.  An event it certainly was; I thought it was also a fascinating opera.  I came out haunted by the music, humming the music, and with lots of thoughts to mull.  From an edgy opening chorus backed by ominously propulsive music to the ambiguous, elegiac conclusion, via dizzying ensembles and interchanges, a complex drama was kept taut through Adams' characteristically inventive orchestration and a fascinating libretto.

I think it's shocking that there should be unsold tickets going for student prices for the opening night of Iphigénie en Tauride with Susan Graham and Plácido Domingo.   Shocking (I'm trying not to gloat.)  I don't know where the usual buyers of orchestra prime seats were, but they were missing out.  It was my first live experience of any Gluck opera (Really Shameful Confession,) and I loved it (for a quick summary of the plot go here.)  The dark intensity and haunting beauty of the music were beautifully communicated, and Stephen Wadsworth's production--not to mention the vocal performances--caught nicely both the emotional immediacy and the ritual unfolding of the drama.  And before I go any further, Gentle Readers, I must confess that I am woefully under-informed on the debates of baroque performance, so I'm just going to give my impressions and beg for your clemency.

Alas, Gentle Readers, I am on enforced opera-hiatus due to a bronchial malaise of some sort.  I refuse to contribute to opera-house coughing, and it seems counterproductive to tire myself out when I wouldn't be able to really appreciate the evening, anyway.  So I have, of course, been forced to get my opera fix elsewhere.  M. Owen Lee's Opera Quiz Book

, in addition to providing hours of innocent intellectual enjoyment, also provided inspiration for sharing some tidbits with you, Gentle Readers, and inviting reciprocation.  Among Fr. Lee's erudite quizzes are three on "I Heard It At The Movies," a compilation of cinematic moments made more memorable by opera.

Email ThisBlogThis!Share to TwitterShare to FacebookShare to Pinterest
Labels: film

I don't promise that this will become a regular feature, Gentle Readers, but I hope it will become a semi-regular one: tidbits of things suitable to soothing Sunday afternoons.  Many of you might say "Soothing?  This is depressing! Morbid, even!"  Ah, well... I have a hypothesis that early childhood familiarity with German Volkslieder gives one a somewhat, er, distinctive perspective on these matters.  Or, I might just be peculiar.  Either way, I think this is absolutely lovely.  Enjoy: The Met's "must-see" Simon Boccanegra was high on my spring wishlist, but I didn't make it down until the penultimate performance on Tuesday night.  Giancarlo Del Monaco's production was heavy with wood, stone, and velvet.  I do have a soft spot for fourteenth-century costumes, but the hyper-realism (especially of Amelia's garden and the Genoese council chamber) was a bit much for me.  And we never see the sea!  Of course, I'm spoiled, because my first acquaintance with this opera was made through a Christof Loy production (Frankfurt, 2007) I wasn't nearly well-informed enough to appreciate properly.  Feel free to hate me for that; rest assured I am properly ashamed.  On Tuesday, the Personenregie, or lack thereof, was an even bigger problem for me, with stand-and-sing delivery and semaphore-stylized gestures.  It was, then, All About The Singing.  Fortunately, this was strong.