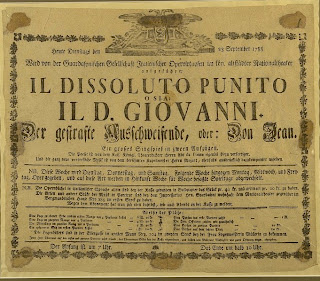 Gentle Readers, rejoice, for I am going to review a book which is actually new, authored by none other than Gale Martin of Operatoonity. Don Juan in Hankey, PA

is Martin's debut novel, and might be described as a fantasy on themes by Mozart. The plot centers on the sometimes blundering attempts of a small-town opera company to ensure their survival--and, if possible, put themselves on the map--through renewing their leadership, and landing a performer with star power for a production of Mozart's most widely-known masterpiece. Like the dramma giocoso from which it takes its inspiration, the novel's genre and tone can be slippery. A gleefully melodramatic tale, Don Juan in Hankey, PA stars barihunks, masked men, and other implausible beings, including some ghosts who are among its most sympathetic characters. But under the surface of this romp lies a very dark tale indeed.

Like the protagonists of James McCourt's Mawrdew Czgowchwz, the Hankey Opera Guild's cast of characters spend much of their time enthusiastically sniping at each other. The power of opera to unite such a motley group of warring personalities appears as one of the art form's notable achievements. The board's chair, Deanna, is ambitious and passionate, but less than self-aware; she is surrounded by a fussy retired physician, an aspiring soprano less ingenuous than she seems, and an emotionally fragile heiress. This ensemble is joined by an amiable Midwesterner, a Frenchman who speaks of himself in the third person, a German conductor who is a Kapellmeistertypus, and an Argentinean baritone with gold in his vocal chords and sex on the brain. Yes, really. Martin plays these stereotypes to the hilt, but also displays them to the reader, as if to say: we all know it's absurd; let's see what happens next.

The surface mode of Don Juan in Hankey, PA might be best compared to a Marx Brothers film: comedic episodes hurrying each other breathlessly along, with just time for some romantic dalliance on the side. The action is split between New York City and the Hankey of the title, a town which boomed with steel, and tries to keep up its self-esteem and its storefronts, both somewhat the worse for wear, in post-industrial Pennsylvania. Can the Hankey Opera Guild win through, despite tempting fate by patronizing the conductor, firing a temperamental soprano, deceiving their sponsors, and angering vengeful ghosts? This is the question driving the novel towards its denouement, but I confess to being more preoccupied by others. Although Deanna is in many ways the central character of this ensemble piece, I found myself sympathizing with those she disparaged. The "Elvira" character of the piece, despite her extreme actions, seemed one of the most profoundly sane. And, most disquietingly, there remained the questions about the Don himself. Who is Don Giovanni? And what was going to be done about him? Martin slyly suggests that Don Giovanni is not only to be found in the crude molester with delusions of grandeur, but also in the seducer for whom women are a necessity to be consumed (the food he drinks, the air he breathes), and even--perhaps especially--in the initially sympathetic entrepreneur who treats a female character with what she (!) terms "good old-fashioned sexism." Although the novel never explicitly mentions whether or not the Hankey Opera Company is using the Prague version of the score, there is no tidy moral epilogue, either on stage or for the novel. Don Giovanni, Martin seems to suggest, is always with us.