To their credit, the creators of The Enchanted Island (in contrast to publicity materials) do not pretend that it is a baroque pastiche. The work would be better described as a new opera using old music. I'm afraid that a parable about wine and wineskins springs to mind. For despite the excellent music and fine singing, the evening as a whole was something of a disappointment. The opera is not without charm; but all the charm is on the surface. "We like to wrestle with destiny," proclaims David Daniels' Prospero at the conclusion of Act I, as he muses on his lot and that of humanity. For Prospero, and for the production, the vital differences between magic and interference were perilously blurred. I can't explain why the lovers from A Midsummer Night's Dream ended up on Prospero's isle; I'm far from sure there was a reason. Although the profound power of forgiveness was invoked throughout and celebrated at the conclusion, I didn't see that the characters or their society were transformed by it. Giving you a synopsis and an itemized list of the music may be all I can do for you, Gentle Readers. (And how I wish I could, instead, give you a meditation on what the work was about.)

Phelim McDermott's production created a phantasmagorical utopia. The sets, by Julian Crouch, were influenced by eighteenth-century stage scenery, Maurice Sendak illustrations, and steampunk. The overall effect was as magically immersive as a children's book. McDermott himself described his desired effect as being that of a child's dream of opera; William Christie likened it, aptly, to Disney's Fantasia. As you may have guessed, Gentle Readers, there is a "but" of explosive force upon my lips (Phantom Tollbooth reference intentional.) I saw little meaningful or coherent development of character or plot. I anticipate your incredulous responses: yes, both Shakespeare and Handel, upon whose work the evening was substantially based, were masters of psychological insight. The Enchanted Island was not. Jeremy Sams' libretto had moments of subtlety and insight which left me waiting--eagerly and in vain--to see them developed. It was very clever, but sometimes too clever by half. The possibilities of exploring questions of gender, power, and colonization were acknowledged and passed over, in favor, it seemed, of a quartet of lovers, a series of spells, and a dizzying succession of arias. The contrivances whirled by at a pace requiring music originally intended for emotional exploration to serve the needs of exposition. The fine cast gave committed performances, but I wish they had had a better vehicle.

The music and words given to the quartet of Midsummer lovers made Handel sound more like Gilbert and Sullivan than I believed possible. I confess to giggling, but the antics wore a bit thin, despite the winsomeness of the singers. Paul Appleby contributed pleasing, plangent singing as Demetrius, with nice phrasing in his opening aria (Handel, "Così la tortorella"; I'm giving all the music its original titles.) Elliot Madore made a vocally energetic, virile Lysander. I wished that Elizabeth DeShong, as Hermia, had been given more to do; she sang cleanly and with incisive passion. Layla Claire made a luminous Helena, singing with limpid tone and expressive phrasing. I thought she should have stayed with Caliban, but that's another story. Placido Domingo got to be, not only a god, but a deus ex machina. He wielded his glitter-edged cape with an authority gained, I assume, through decades of practice in cape-wielding. His singing (mostly Rameau) could not be called effortless, but it was confident and I found it effective, especially in Act II  where he chastised everyone and then fixed their problems ("Castor revoit le jour.")

Miranda was, perhaps inevitably, dramatically bland, but the gorgeous tone of Lisette Oropesa gave the role some weight and sympathy notwithstanding. I had been hoping that Sycorax would be given more depth and nuance, more righteous anger, and more agency, than The Tempest accords her. After all, they'd gotten Joyce DiDonato to sing the role! Despite this, Sycorax remained, well, an evil sorceress. Except when she was a well-meaning mother. I didn't think the role was made consistent or compelling, and DiDonato singing Handel's "Morirò, ma vendicata," Vivaldi's "Se lento ancora il fulmine" and Leclair's "Noires divinités," inter alia, could not save it. (Whether it was me, her, or the evil-queen-from-Snow-White costume, I didn't find DiDonato as engaged/engaging as I usually have.) I did find her lament for Caliban's grief (taken from a cantata on Il pianto di Maria) very moving, and very beautifully sung.

To my surprise, Caliban--poor, misshapen, frustrated Caliban--was my favorite character. Luca Pisaroni sang with excellent diction, dramatic ferocity, and impressive agility. (Cf. his "O voi dell'Erebo" from 2010.) Danielle De Niese's Ariel was, appropriately enough for that endearing little egoist, a close cousin of Peter Pan. Her tone could turn edgy at the top of her range, and she seemed to struggle a bit with the murderous consonant clusters of her opening aria. Her energy, though, was commendable, and her comic timing good. Although I found its placing in the opera confusing, De Niese acquitted herself surprisingly well in "Agitata da due venti," despite being inexplicably interrupted by the audience. David Daniels, as Prospero, seemed to take some time to warm up fully, but contributed sweet, lyrical singing in Handel's "Pena tiranna" and "Ch'io parta?" William Christie drew graceful playing from the Met orchestra, with a light touch, but more seriousness of purpose than the drama displayed. Significantly, when David Daniels quotes Prospero's speech from Tempest IV.i ("Our revels now are ended...") the lines where he meditates on mortality are cut. All that's left are the actor spirits, the cloud-capped towers and gorgeous palaces--an all too insubstantial pageant.

Cast and conductor at curtain call: 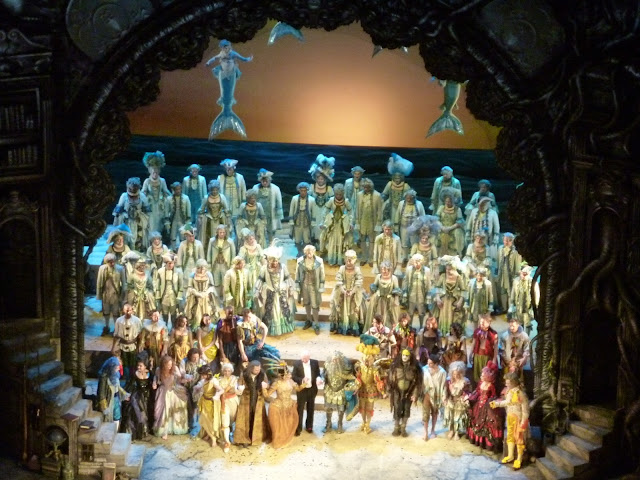 The Met in readiness for gala supper: 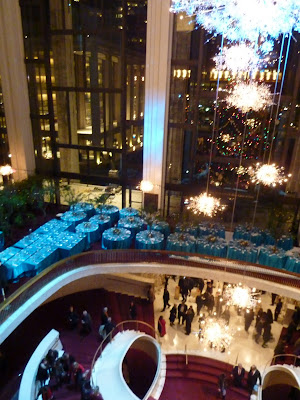