The melodramatic plot of Adriana Lecouvreur is easily parodied, but its music is less easily dismissed. With fine and passionate singing, Francesco Cilea's verismo concoction was given vivid life by the Opera Orchestra of New York. Alberto Veronesi led the orchestra with fine feeling for the energy and emotion of the score. A brisk pace and light touch in the first and third acts, especially, helped set off the emotional crises in which Veronesi was not afraid to luxuriate (not to say wallow.) There were some issues of clarity, and the orchestra was perhaps, on the whole, a bit loud, but it was a fine performance. The New York Choral Ensemble did a creditable job with the difficult task of being an excitable crowd while in serried ranks on bleachers. The self-conscious historical detail and oft-repeated motifs of the score might have faltered in their effect were it not for the accomplished and emotionally intense performances of the singers. Angela Gheorghiu displayed vocal daring--and temperament to spare--as the titular diva, and Jonas Kaufmann sang the role of her cavalier thrillingly.

If you really feel you need a synopsis of the opera, you can find one here; there's also a handy diagram which sums things up even faster. Adriana's theatrical colleagues acquitted themselves respectably enough. Craig Hart, once fully warmed up, was a convincingly autocratic prince, if not a particularly threatening one (his role suffers somewhat in concert, as it usually involves a considerable amount of stage action. The same is true of the abbé; my impatience with the latter is probably due more to role than singer.) Ambrogio Maestri made an excellent Michonnet; the buffo leanings of the role were minimized in his warm and sympathetic portrayal of Adriana's confidant. His baritone was warm and supple, and he sang expressively throughout, with a poignant "Ecco il monologo"; his Act III admonishment to Adriana ("Noi siam povera gente") I found very moving. Anita Rachvelishvili gave a spirited and forceful performance as the Principessa di Bouillon. The size of her voice was impressive, and her diction was good, but she struggled with intonation problems throughout the evening. Still, her dramatic commitment was fierce, and she had good chemistry with the other principals.

Kaufmann and Gheorghiu were well-matched, and well-suited--I'm tempted to say ideally suited--to their roles, which displayed their vocal and dramatic strengths admirably. Before I start gushing about the vocal excellence, though, I'd like to commend the artists' solution to the awkward problem of portraying a passionate romantic relationship in a concert staging. As far as I could tell, there was nothing that would have violated the Hays Code, but the singers conveyed a sense of real intimacy between Adriana and Maurizio. The suggestive orchestral interlude after the final act's "Deh vien sul cor," for instance, was filled with what was almost a dance, Adriana held lightly and tenderly in her cavalier's arms. Adding confusion to the already complicated plot was a similarly sweet moment after Adriana's outburst in Act III; in the shocked silence, she reaches, gropingly, for Maurizio's sleeve. I was dreading his rejection... but he covered her hand with his, and then held it until the last chord died away. Pst, Maurizio, you're supposed to make her angry with you! I was going to talk about the singing, wasn't I? Right then.

Jonas Kaufmann embodied Maurizio beautifully from first to last, using a rich vocal palette with confidence and subtlety (and, notably, staying in character as the hot-blooded prince even when exiting and entering, striding, bounding, strolling.) I could gush about Kaufmann's diction and word-painting indefinitely; he sang with humor, charm, and sensitivity. "La dolcissima effigie" was ardent and eager to convince, and the duet with Gheorghiu excitingly passionate. The Act II scene with Rachvelishvili displayed fine chemistry; the light flirtation of the opening was soon cast off--Mentire non so--and "L'anima ho stanca" was powerful. Dynamic nuance, impressive rubato (well-coordinated with Veronesi) and attention to text and phrasing rendered the aria a painfully intimate confession. I cried. I also cried through much of the final scene. Kaufmann almost jumped a couple of his cues, but it would have taken far more than that to disturb the emotional intensity of the lovers' reconciliation, their fragile joy, Maurizio's terror at Adriana's delirium, and his grief at her death. The first "Morta!" was a forte cry; the second with a decrescendo, holding the last thread of sound for what seemed like an eternity of anguish. The audience silence over the orchestral mourning was broken only by a few muffled sobs.

Angela Gheorghiu may be a deeply frustrating artist when off the stage, but she can be a powerfully convincing one on it. Her theatrical mannerisms might have seemed excessive in almost any role but that of Adriana, but as it was, I thought they worked. From the outset, she established the character of the actress as both flirtatious and vulnerable, not merely an impenetrable stage personality. I didn't catch all her Italian, but she sang very expressively throughout. It's easy for me to forget, distracted by the mannerisms, how gorgeous Gheorghiu's instrument actually is; she doesn't have a terribly large voice, but she wielded her gleaming tone beautifully, spinning luxuriously long lines of sound. Her fiery spontaneity on stage also stood her in good stead, and she made the most of a role which can be characterized (if slightly unfairly) as a succession of diva moments. "Io son l'umile ancella" was a diva moment par excellence, including an imperious maintenance of her desired tempi. Veronesi fell in meekly. The Act II recognition of Maurizio was charmingly handled, the confrontation with Rachvelishvili's Principessa powerful. Breathy larmoyante phrasing and reckless pianissimi fit, for me, with the increasingly desperate Adriana of the second half. With "Ecco la luce che mi seduce" she completed her seduction of the audience. 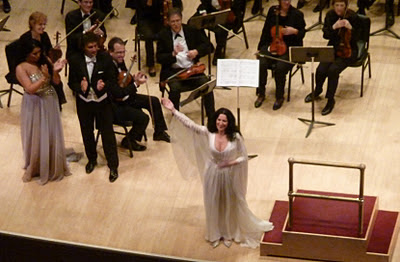