The Tosca I attended on Saturday evening was the first performance in the North Shore Music Festival's inaugural season. I enjoyed myself  immensely; the performance was passionate, but my reasons for estimating the evening as a rousing success are external as well. The audience seemed to consist primarily of couples and families who had chosen to attend for the sake of a nice night out at the venue; to judge by the response to the pre-performance question, few had seen Tosca before. Several I spoke to (and more I overheard) were attending their first opera. And to judge by the applause, they loved it. I was fascinated by the concept of going for new audiences with what struck me as a proposal harking back to the nineteenth century: come out to a stately home, have a nice meal, socialize with neighbors and peers, hear world-class music. I was also fascinated by how well it worked. That it did so was, of course, substantially due to the quality and passion of the performance. 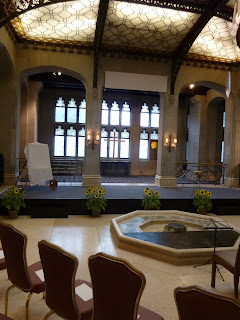 The stage was, as shown, at the front of an indoor colonnaded square. While the naughty choirboys hung over the embrasure on the left, and Tosca used it for her exit line in Act I, action was mostly confined to this space. There was no orchestra, but in piano reduction and with the help of an organ for the "Te Deum," I still found it an atmospheric rendering of the score. Conductor Anthony LaGruth helpfully gave the audience a pre-performance talk which introduced Scarpia's theme, and explained its function of foreshadowing. Pianist Georgianna Pappas followed the singers attentively. The level of emotional commitment exhibited by the principals meant that a few switched or muddled lines did not prove too distracting. The costumes set the piece in the recent past: all-black for Scarpia (naturally,) a denim jacket and loud shirt which suggested that Cavaradossi was perhaps a self-conscious enfant terrible, and stunning diva red for Tosca, whether in suit or evening gown (her Act II jewelry could have been a Callas tribute, which I thought was a nice touch.)

Mark Fitzgerald Wilson doubled as Angelotti and the jailer; his characterization of the two was differentiated more dramatically than vocally, but he acquitted himself well. The charismatic Scarpia of Daniel Klein was the vocal standout of the evening. This Scarpia was indeed dangerous, but played more to the complex character's suavity and sensualism than the brutality beneath the hypocritical surface. The sadistic pleasure Scarpia derives from his machinations was disturbingly clear. Klein sang with fine legato phrasing; Scarpia threatened with a purr rather than a snarl of menace. I felt that the corrupt baron's erotic attraction to Tosca was more visible than her Voltairean lover's.

The Cavaradossi of Adam Klein (no relation to Scarpia, to my knowledge) was very much the political activist. The contention of Franco Serpa (in this book

) that the painter's passion and art are doomed because of "rashness and blind exaltation" seemed more than usually convincing. He sang strongly; indeed, he seemed to sing almost everything as if it were a manifesto. Klein brought more nuance and romanticism to "E lucevan le stelle" than I expected, but his imperious refusal of a blindfold felt more natural to his portrayal of Cavaradossi than the last, passionate embrace with Tosca. Samia Bahu, a soprano with impressive Puccinian credentials, took a little time to warm up, but sounded much more secure at her second entrance than her first. Act II saw her in glorious form, completely terrified and subsequently enraged. Bahu's Tosca was a passionate woman, mature enough to know how precarious happiness can be; the fragility of the diva's confidence was movingly portrayed. Her "Vissi d'arte" made me tear up, and I found myself sniffling in Act III as well. What can I say? Tosca gets me every time.

The festival will offer a performance of Don Pasquale on August 27th, and Pagliaccio on September 17th. Tickets are available here. My intentions of getting curtain call photos were foiled by my (old) camera having a fit of temperament, but here are some more images for atmosphere: