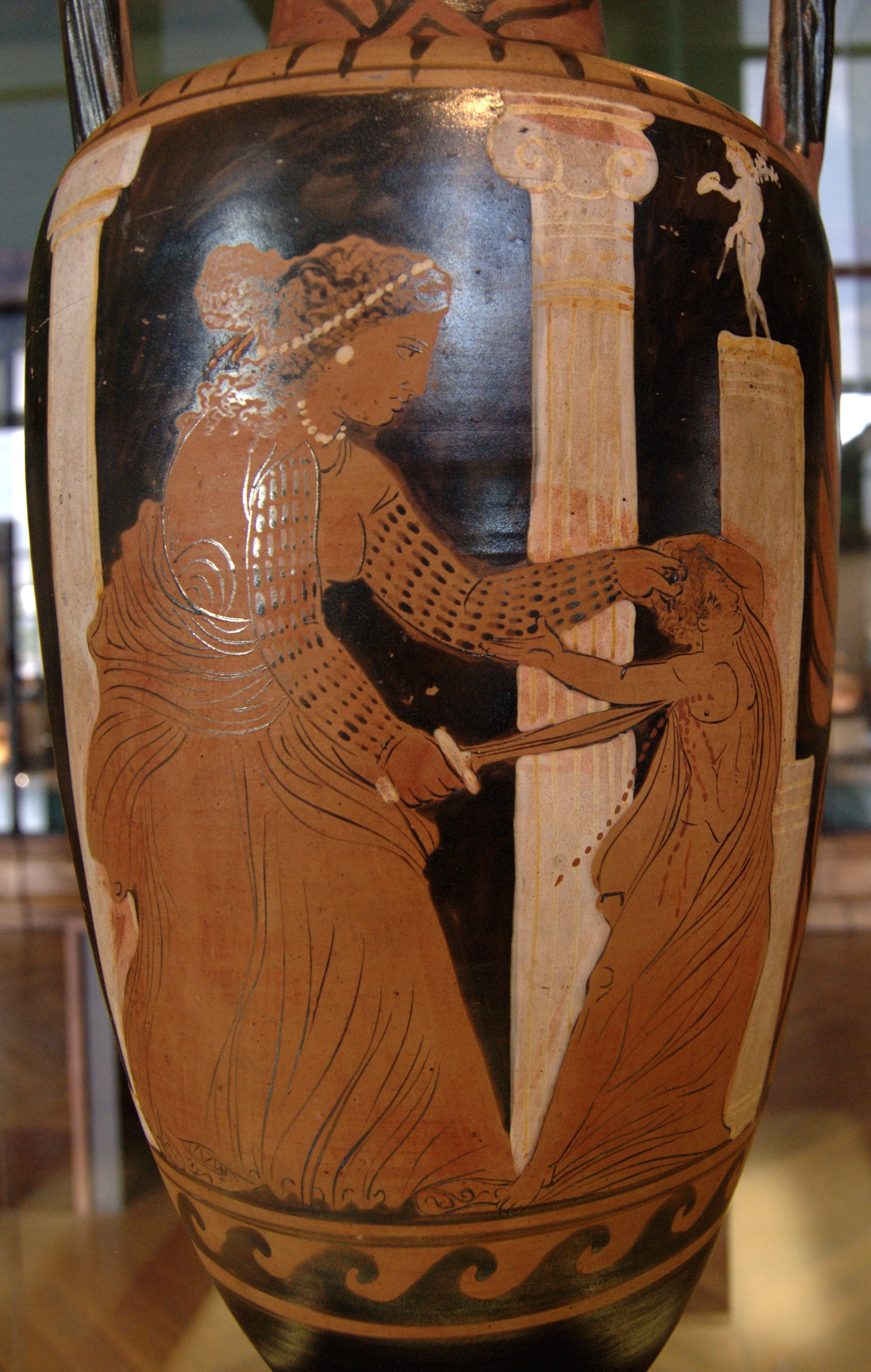 Medea, Euripides' brilliant, brutal drama, has been adapted as an opera more than once, and no wonder. Here's the plot: Medea is a sorceress, of royal and divine blood. Aphrodite makes her fall in love with Jason.  Medea helps him complete a series of impossible tasks, marries him, and flees her country with him; they end up in Corinth. Here, Jason takes it into his head to marry the king's daughter. Medea, feared and ostracized as a barbarian and sorceress, pleads the justice of her cause in vain. In revenge against the faithless Jason, she kills his bride. Then, she kills the children she bore him: to save them from a worse fate at the hands of her enemies, or to punish their father... or both. Luigi Cherubini's 1797 opera has orchestral passages of tempestuous foreboding, confrontation between Medea and Jason crackling with the threat of violence, tense political drama in her pleas to the king of Corinth, and a great scene with the chorus invoking the gods' blessing on Jason's new wedding, while Medea demands of the same gods their aid in accomplishing her vengeance. Although Medea is given passages of anguished inner debate about the fate of her children, the orchestra is busy foretelling doom. It all ends with the entire chorus being terrified and ineffectual (hey, it's based on Greek drama, what did you expect?) and portents in heaven and on earth.

The last performance in this year's run of the opera at Glimmerglass did not quite capture this sense of fateful urgency and human anguish. For a start, there was the production. There was one unit set with sliding doors at the back and some geometric shapes to liven things up. A serpent alluding to Medea's earlier deeds twined across the doors, and the sun hung prominently in the sky on the backdrop. The Golden Fleece, once brought in by the Argonauts, hung in the center in a rather ominous manner (here a golden helmet with rams' horns; vague memories tell me this may be based on scholarly research/speculation, but it's not in Graves

.) The Personenregie was hardest on poor Glauce (the second wife); it turned her into a hapless creature with fewer brains than a sheep, easily distracted from her forebodings and sense of guilt by shiny things, and prone to giggling with a gaggle of maidservants. This made me more than a little angry; it undermines the suspense of wondering if Glauce will take the robe and crown of Apollo which Medea has poisoned, diminishes the tragedy of Glauce as a struggling, sympathetic character, and adds scenes of implausible giggling.

Then there was the business of classical allusion. If you know that Medea is the granddaughter of Phoebus Apollo, then the sun which marks the passage of time, and ends bloodily eclipsed, adds a layer of drama; otherwise, it seems a bit pointless (or this was my assessment, having remembered about halfway through that Medea was descended from the sun god.) Then there are the Furies. They first appear at the finale of Act I, darkly shrouded women wearing Medea's costumes for Acts II and III, respectively. This could be an interesting way of engaging the debate about whether the characters are driven by fate or their own choices, and pointing to the complexity of Medea's personality, but I didn't think it was very clearly developed. They spent a lot of time standing around being darkly shrouded. And there were only two of them. A quick Google search surely could have established that the Erinnyes, or Eumenides, or Furies (they are called all three in the libretto) are three, and that they specialize in driving people mad, aggressively. If not snakes and a scourge, could we at least have had some scary face paint and menacing gestures? But I'll end this rant and get on to the music.

Glimmerglass (I don't know at what level) decided not to perform Medea with the original French text and spoken récits, but in Carlos Zangarini's Italian translation of Franz Lachner's German version, without spoken dialog. It's not remotely authentic, conforming instead to most of nineteenth- and twentieth-century practice; it is the version familiarized--one might say, indelibly marked--by Callas

. And it is exciting. The orchestra had some moments of uncertainty, but Daniele Rustioni led them with great vigor. He kept the momentum strong with brisk tempi, but paid fine attention to the singers. I very much appreciated Rustioni's sense for dynamic nuance, most conspicuous in the overtures to the first and third acts. Hopefully his accelerating career and my opera-going intersect again soon.

Smaller roles were competently filled, although I thought Meredith Lustig's voice had been better suited to Donizetti's bel canto than the role of the 1st Maidservant, here. Sarah Larsen was an earnest and warm Neris, though her diction was not always clear. The production didn't help develop the complexities of Creon's character, but the king of Corinth was well sung by David Pittsinger, whose confident presence and sonorous bass-baritone both provided welcome gravitas. Jeffrey Gwaltney was substituting for Jason Collins as Jason, and I regret to say that he did not seem up to the part. Whether as the result of having a rough day, or simply inexperience, he sounded husky and pushed through most of the role. Jessica Stavros, substituting for Wendy Bryn Harmer (whom I was sorry to miss) sounded tense in her first scene as Glauce, but I thought she improved as she relaxed, with more reliable intonation and better phrasing.

This leaves Alexandra Deshorties' fierce and compelling performance in the title role, which for me did much to hold the whole thing together. If her voice sounded a bit rough in places, I felt this detracted not at all from her portrayal of the powerful sorceress, spurned, wary, and more than a little unbalanced. Deshorties made Medea genuinely tormented, and managed to convey both her own vulnerability (as, for instance, in her scene with Creon) and her utter contempt for the wretched Jason and his bride... indeed, for the entire society of Corinth. Even in "Numi, venite a me," she seemed animated more by the deep, burning consciousness of injustice than unbridled rage against it. Although the actual murder took place off stage (the temple was, inexplicably, represented as under the stage) I wasn't convinced it was going to; her final scene with her children was chilling. After that, calmly calling down a rain of blood and an eclipse on the terrified Corinthians seemed almost an afterthought.

*For a comparative perspective on the afternoon's proceedings, see Zerbinetta's post at Likely Impossibilities; I'm running up quite a debt of opera-attendance to her, as she did the driving to Remotest Glimmerglass. (You know it's a good road trip when baroque recital discs are the listening of choice.) More on how Remote and Picturesque it was in a follow-up post!
Posted by Lucy at 12:51 AM