Paisiello's Barber with the OSO: Figaro at the Fabbri Mansion 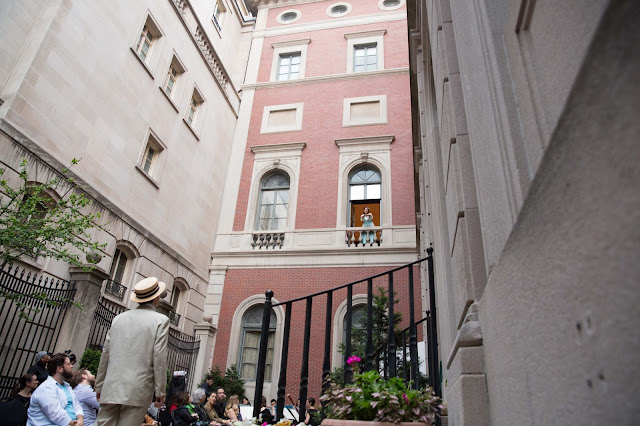 Editorial note: please welcome Opera Obsession's first guest blogger: none other than Alex, my Musicologist Roommate, covering New York opera happenings in my absence.
**
On Saturday, I jumped at the opportunity to see On Site Opera’s production of Giovanni Paisiello’s The Barber of Seville (1775) at the Fabbri Mansion on the Upper East Side. Having never seen a production of the lesser-known Barber, I was excited to experience the earliest adaptation of Beaumarchais’ famous Figaro play. The orchestra, a small chamber group made up of just guitar, flute, clarinet, bassoon, and a string quartet, led by Geoffrey McDonald was lively and just enough to support the small cast of characters without overpowering them. I especially enjoyed the use of guitar in place of harpsichord, which both updated the classical sound of the original orchestration and added a subtle Andalusian flare to the overall character of the score.

The mansion, now called the House of the Redeemer, is an Italian Renaissance revival house and was the perfect setting for this intimate and interactive production. The opera began outside for act one. Figaro and Almaviva, played by Andrew Wilkowske and David Blalock respectively, meet in the outdoor courtyard and gesture to the high window and balcony that were later the setting for Rosina’s act one arias. When Rosina, played by Monica Yunus, drops the music from “The Useless Precaution” from the balcony onto the courtyard for the Count to retrieve, the practical elements of the house itself serve to transport the audience into the drama of the opera. For act two, the audience moved upstairs to the Fabbri Mansion’s palatial library. Yet again, the mansion allowed the production to immerse the audience in the action. When Figaro and Rosina hear Dr. Bartolo, played by Rod Nelman, coming toward the library, Figaro runs to the corner of the room and opens a secret room hidden behind one of the library’s bookcases. OSO’s choice to use the Fabbri Mansion as the setting for this particular opera presented the audience with a truly immersive and unique opera experience that I enjoyed immensely. 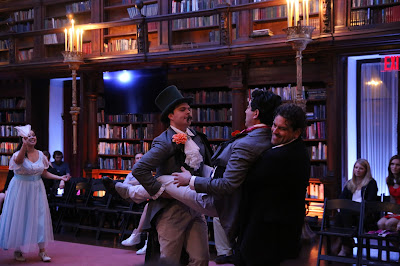 The small cast of characters was vocally strong and incredibly talented. I was particularly impressed with Monica Yunus and David Blalock. Their chemistry as Rosina and Almaviva made up the heart of the production. Yunus is a masterful singer with crystal clear ornamentations and a strong stage presence despite her petite frame (something made more apparent in this small setting than it would have been on a stage). Blalock gave a standout performance, especially when he stole every scene in disguise as Alfonso—camouflaging his voice more with sotto voce style than with a nasal pinch. Andrew Wilkowske is a versatile talent. During the first act he not only sang an entertaining Figaro with perfect comedic timing, but he also picked up a guitar and played some complex recitative cadenzas in character. Rod Nelman, though he took a bit to settle into the first act, shined in acts two, three, and four, especially in the two trios. His haughty Bartolo paired well with the absurdity of Benjamin Bloomfield’s and Jessica Rose Futran’s Svegliato and Giovanetta and really accentuated the opera buffa style. His second trio, this time with Yunus and Blalock, was my favorite musical moment of the evening. The repetitive cadences with strong sung 7ths were extraordinary and perfectly in tune. I laughed and sighed in content in equal measure. Overall, the night’s strong singing and acting made for a performance that was both well done and flat-out entertaining.

As much as I enjoyed the intimate atmosphere, it did highlight some weaknesses in the production. The lighting, designed by Shawn Kaufmann, while mostly soft and beautiful, could at times be garish especially when utilizing yellow and red colored lights. I’m not sure if this was the color of the lights themselves that were offensive, or just their use in such an intimate space in the library. At one point the entire room was bathed in red light and I was not sure why other than to be obviously transitional, but with the interlude music, I wasn’t sure that it was needed. Also, there seemed to be a significant lag on the English translation that my roommate, who accompanied me, pointed out. But these are minor blemishes on an otherwise magnificent production. OSO’s Barber of Seville is a wonderful addition to the company’s repertoire and is a glowing example of the company’s mission to stage operas in non-traditional settings and gave Paisiello’s opera not only a unique and intimate feel, but a truly authentic one as well.
Posted by Lucy at 5:57 PM