Richard Tucker Day: A reverential mission and a free concert 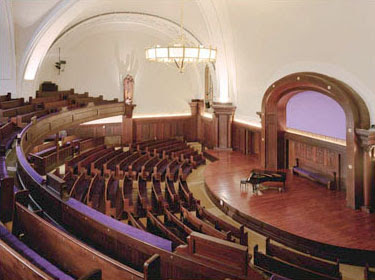 One of my favorite things about Tucker Foundation events is the relentlessly informal atmosphere that pervades the preliminaries, regardless of how showy the arias or sparkling the gowns in the ensuing recital. To mark Richard Tucker Day on Thursday, the foundation sponsored two free concerts; to the second of these, held in the evening, I went with the Beloved Flatmate (emerita.) The auditorium of the New York Society for Ethical Culture (pictured) turned out to have favorable acoustics, and we were able to slip into a third-row seat without any trouble. While smaller than the audience for the Gala, this one was noticeably younger and more diverse, as I was pleased to note. Despite the line stretching well down the block for admission, I was surprised that there wasn't a larger turnout for a free concert with musicians of this caliber. Rising young artists and headlining stars gave mostly-showy pieces from a cross-section of the operatic repertoire stretching from early Mozart to Boito and Bizet, and, in the second half of the program, ventured into hits from American musicals to great effect. Bryan Wagorn, at the piano, proved himself an able and versatile accompanist.

This is the second Tucker concert I've been to where a young tenor has opened the evening with "Ah! mes amis..." This seems like cruel treatment to me; but Andrew Stenson took Tonio's aria with only comic-opera flinching before an imagined regiment of adoptive fathers. His French was excellent, his on-stage persona charismatic, and his bright lyric tenor had a core of muscular strength. The audience relaxed quickly, and was completely won by the time Stenson brought out the last, extravagantly held high C. Stenson had an opportunity to exhibit sensitive phrasing in his later partnership with Erin Morley in "Welch' ein Geschick!" I rarely hear Die Entführung excerpted in concert, so enjoyed this. Morley's singing was sweet-toned and secure, and she conveyed an apt mixture of tenderness and conviction. From both singers I would have appreciated clearer German; but I almost always say that. Morley also gave a "Martern aller Arten" of impressive technical accomplishment. Nicholas Pallesen I have heard elsewhere and much enjoyed (including in a Strauss rarity at the late lamented City Opera.) His "Cruda, funesta smania" was less happy; he met the demands of the piece adequately, but didn't seem at ease with it, and resorted to the silent-film-villain school of baritone acting. Anthony Roth Costanzo seemed to be having an off night. His selection for the first half of the concert was the murderous "Venga pur, minacci e frema." Costanzo struggled with register transitions and occasionally with pitch, but the "Roma in me rispetti e tema" section sounded more secure than the first.

Rounding out the first section of the concert were Wendy Bryn Harmer and Ailyn Pérez. Pérez gave perhaps the least ostentatious, and decidedly the most affecting performance of the evening, with "Je dis que rien ne m'épouvante." Poor Micaela's aria was given by Pérez with a deep seriousness, and a pervasive sadness not lifted even in her moments of resolve. At this point in her career, it should go without saying that Pérez's French and her phrasing were excellent. Of interest to NYC opera-goers: Micaela will be the role in which Pérez makes her Met debut next year. Bryn Harmer ventured into the obscurities of verismo with the gorgeous "L'altra notte in fondo al mare," which she delivered with superb technique and a gleaming, impressive sound. I missed a haunting sense of Margherita's despair... but far more poignancy was brought to Bryn Harmer's second half offering, of "Tu che di gel sei cinta." I especially appreciated that she conveyed Liù's sadness as one more of reproach than resignation. (Turandot: a serious contender in the crowded competition for Most Deeply Messed Up Opera Plot.) Isabel Leonard gave Xavier Montsalvatge's "Canción de cuna para dormer a un negrito" with unaffected, graceful phrasing. Stephen Costello followed this with a pairing of the late-20s hit "Without a Song" and the Mario Lanza classic "Be My Love." I should confess: I have never previously really warmed to Costello, despite hearing and appreciating his singing; the spark of excitement animating (apparently) everyone else in the opera world has hitherto passed me by. But! I loved what he did with these, giving a bluesy intensity to "Without a Song," an appropriately heart-on-sleeve earnestness to "Be My Love," both of which fit him well. The offering of "One Hand, One Heart/Tonight" given by Costello and Pérez with fine singing and excellent chemistry, was greeted rapturously. Leonard and Costanzo followed this (unenviable task) with a lighthearted "I Got Rhythm." Sharing notes, mock-fighting over the spotlight, they romped through the Gershwin to everyone's amusement... and then they added a tap dance routine. From new-to-me singers to the soft shoe shuffle, it was a pleasantly relaxed evening of the opera preseason.