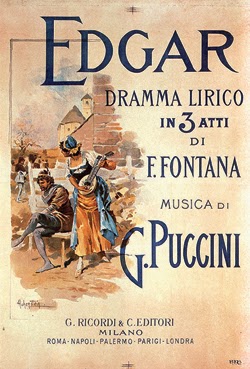 Oper Frankfurt assembled a luxurious cast for two concert performances of Puccini's second opera this week. Not knowing when I'd get the chance to hear Edgar live again, I jumped at the chance to do so, especially since it also offered the opportunity to hear Angela Meade again, and Bryan Hymel for the first time. Mezzo Tanja Ariane Baumgartner joined them in making the most of the music, and making the principal characters both more plausible and more sympathetic than they are as written. What struck me first on listening to recordings of Edgar was the theatrical pacing and use of the orchestra colors. In Michele Girardi's chapter (in here

)  covering the work, though, the focus was on the patent weaknesses of the libretto. According to Girardi, Fontana committed "gross linguistic and metrical sins," forcing the composer to "attempt the impossible in making up for for plot deficiencies with music." Although it's not Puccini's most bold or sophisticated music, I did find the libretto harder to ignore in performance than in recordings, and often hard to excuse. The opening scene offers a representative example: the woodwinds, growing in number, evoke waking birds, while a breeze rustles through the strings; chimes are succeeded by a clear bell… and then the chorus comes in and tells us that it is dawn, that the last star has disappeared, and that a faraway bell is ringing. (I couldn't help contrasting it mentally with the gorgeous naturalism of Bohème's Act III opening.) The plot of Edgar centers on the eponymous hero, nominally torn between the soprano who sings aubades about almond blossoms and the mezzo who was raised by traveling Moors (!) and sings about survival of the fittest and about torrid kisses. He seems more interested in Byronic introspection than in either of them, though, symbolically burning down his house when he takes up with the mezzo at the end of Act I, going off to join nationalist endeavors as an act of repentance and self-purification for taking up with the mezzo at the end of Act II, and staging his own funeral as an aesthetic and social experiment in Act III. There's a baritone who hovers around the edges of the drama, being in love with the mezzo and leading the soldiers, in both cases for reasons which are unclear. At the work's climax, the mezzo is tricked by the tenor and then excoriated by the hypocritical chorus, so she stabs the soprano in the back. In short, it's the kind of drama that begs for a concert performance (or for a really good critical production.) And Frankfurt's concert performance was of a very fine caliber indeed.


Edgar's chorus does much more massed exclaiming than those of Puccini's later operas, and this vox populi not only drives action itself, but is important as that against which the tenor reacts. Frankfurt's chorus, prepared by Matthias Köhler, was very impressive, coloring their sound effectively (they were seamlessly joined by a children's chorus for the imposing funeral scene.) Parenthetically, I found it interesting to see Puccini experimenting with inherited forms (religious scenes, crowd scenes) before he'd fully figured out how he wanted to make them his own. Marc Soustrot led the orchestra in a performance with generous sweep and lots of energy, giving full-blooded commitment to the evocation of landscapes and moods without allowing tempi to drag, and with a lovely range of color in strings and woodwinds. The orchestra did have a tendency to become slightly over-loud, but focusing on the propulsive quality of the score rather than attempting to milk sentiment was a welcome choice. It's perhaps a backhanded compliment to the composer, but hearing Edgar serves, among other things, as a reminder of how much bolder and more individualized Puccini's orchestral language would become, and how he would adjust his use of it. Edgar's large, sweeping musical gestures may be close relatives to those of Manon Lescaut or Madama Butterfly, but the later operas not only have more distinctively colored orchestral and vocal fireworks, but place them in service of strongly individualized--even homely--emotions, rather than the grandiloquent abstractions or sentimental clichés of Fontana's clunky text.

Vocally, there wasn't a weak link in the cast. Ensemble member Kihwan Sim was silky and dignified as Gualtiero, his bass carrying authority despite the conspicuous youth of this father figure. Baritone Marco Vratogna, as Frank, sang with very fine and expressive phrasing, his dark-grained timbre well-suited to the snarling villains of the Italian canon. As the resolutely amoral Tigrana, Tanja Ariane Baumgartner not only impressed vocally, but acted--and acted well--even when not singing. She colored her mezzo expressively, and used diction well. Baumgartner's characterization made of Tigrana a character who is, above all, outspokenly truthful, and impervious to attempts to shame her for being so. Her expressed relief that she can grieve for Edgar in privacy comes across as honest, rather than the hypocrisy which Fontana--and Edgar and Frank--insist it is, because lustful women can never grieve sincerely (sic.) And thus it becomes the browbeating, the temptation into lying about Edgar which leads to her fatal resentment. Angela Meade had the thankless task of animating the role of a Virtuous Farmer's Daughter… named Fidelia, no less. Fortunately, the voluptuousness and power of her voice, and the impressive control with which she used it, did much to fill out this rather colorless character. Meade used dynamics well throughout, a sudden crescendo or decrescendo raising the stakes of a scene. She managed to infuse "Già il mandorlo vicino" with real tenderness, and made of "Addio mio dolce amor" not a lachrymose declaration of conventional romantic piety, but rather the convention-defying stand which it is. Yes, she's saying that she'll dedicate her life solely to mourning his memory (sigh) but she's doing this for a man with whom she has no officially recognized relationship, and she continues to defend his character against public opprobrium and the accusations of the Church (as represented by a monk who turns out to be Edgar in disguise… but she doesn't know that.)

I confess that I did find myself wondering more than once how Edgar manages to inspire devotion while willfully and thoughtlessly offending almost everyone else in the opera. Fortunately, the stylishness and power of Bryan Hymel's singing could hardly be bettered. Edgar isn't given much more to express than Byronic Gloom and Malaise, but such was Hymel's ardor that he gave even generic utterances a sense of personal urgency. He sang with a straightforward power and beauty that were winsome as well as impressive. Puccini has his tenor toss off high notes with somewhat indiscriminate enthusiasm (perhaps a deliberate characterization choice for this indecisive and passionate young man?) and Hymel met every one as if it were an old friend rather than a challenge. The steadily rising emotional temperature of the final scene had me, at least, on the edge of my seat. Although the drama could hardly be called compelling, I couldn't wait to hear what the singers would do next.
Posted by Lucy at 4:50 AM