La Forza del Destino is much more often described as containing some of Verdi's finest music than it is described as being one of his finest operas. Martin Kusej's production, which I saw last Sunday, has the great virtue of bringing a clear and coherently developed concept to an opera (in)famous for being episodic. The opera can be presented as a sprawling epic, but the musical characterization of the principals is too fine for them ever to be lost to the audience in the turmoil. Kusej keeps the focus of the production on these principals--the anguished Leonora, the rabidly principled Don Carlo, and Alvaro, who, hunted by ill-fortune, turns too easily to violence. I think the production can function on several levels, but it is primarily shaped by the perspective of Leonora, who is attempting to escape, mentally at least, from a world defined by order. She is literally as well as figuratively stifled, longing for air; but as her heart-torn aria makes clear, she cares deeply about her place in this order and about the others in it.

During the overture, we see Leonora's household as a sterile and tightly controlled environment, supervised first by her father the Marquis; but also by the priest who guides ritual; by the armed men who guard it. Leonora's flight takes place into what can only be imagined as a terrifying chaos. Alvaro appears not only as genuinely dangerous, but perhaps dangerously selfish; when all goes fatefully awry, he is still ready to shoot their way out, come what may. Positioning the chaos of the central acts in Leonora's imagination may sound like an evasion, but the scenes were thoughtfully handled, and I thought allowed for many layers of meaning, rather than turning away from them. It's easy to see the Act II as a commentary on the events of Sept. 11 and responses to them, with a shocked society which turns too easily and quickly to war. The horrors of war--torture and displacement and, as the doctor laments, far too much useless death--visually reference the American atrocities of a decade ago, but are positioned as a universal tragedy. From my place in standing room, I couldn't see the action which takes place around the dining room table that alone remains standing throughout the nightmarish scenes, but I was impressed by the strong images of the camp and the battlefield. (I got to see the table thanks to the late-December webcast.) I could have wished for more propulsive energy from the orchestra, but each of the principals sang well and passionately. And Anja Harteros, whom I was hearing for the first time, was nothing less than a revelation.

Sunday marked another first for me as well, as I hadn't previously been to the Bayrische Staatsoper. I loved the warm tone of the orchestra, full and generous, but Asher Fisch's conducting failed to make a case for the continuity of the score. I felt this keenly in this opera of all operas, where, however ambiguous the events, the orchestra speaks of ineluctable fate. As the resilient Preziosilla, who sells illusions while being devoid of them herself, Nadia Krasteva showed a sizable if somewhat unwieldy mezzo. She was less than confident with the demanding "Rataplan," but sold the sensuality of the role. Vitalij Kowaljov, charismatic in the dual role of the Marquis and Padre Guardiano, exhibiting fluid as well as expressive and resonant singing. Ludovic Tézier was consistently impressive as Don Carlo. I was struck by how much larger his voice sounded here than at the vast Met, giving him more range in which to be menacing. Tézier had fine line and use of text, making the mendacious "Son Pereda" more more interesting than I usually find it, though "Urna fatal" was perhaps less so. His interactions with Jonas Kaufmann's Alvaro were highly charged and consistently exciting, both vocally and dramatically.  Both singers gave emotional immediacy to the broken and repeated exclamations of these sworn friends divided by a vow of vengeance. Without the extravagant vocal effects often associated with verismo singing, Kaufmann gave a performance of striking realism, conveying heartsickness in his great "La vita è inferno," exhaustion so absolute as to be terrifying in "Solenne in quest'ora." Though he echoes Leonora's words of redemption, after the traumas of the last act, there is nothing left for him to believe in. As the trapped, passionate Leonora, Anja Harteros gave an intense, intensely moving performance. Never did she indulge in sentimentality, and she sang with stunning flexibility and control, with a rich tonal palette and strength across her range. I know I'm gushing, and I don't know when I last felt so justified in doing so. Harteros brought both emotional nuance and impressive, appropriate steel to her arrival at the monastery and the taking of her vows. Her cry for peace is a cry of anguish; and it was exquisitely sung, from the fine-spun crescendo of her opening through incisive, bitter exclamation, crying out for her lover, crying out for death in a way that gave me goosebumps. The final scene, too, was beautifully sung by all parties, though it brought with it a slight sense of anti-climax, perhaps partly due to the fact that most of it was invisible from where I stood. Alvaro neither throws himself off a cliff with a curse (as in the first performing version of the opera) or throws himself on Padre Guardiano's guidance; he is simply left alone, crushed. His is a terrible fate… but it makes for great Verdi.

The bows were prolonged and joyous and taken in response to prolonged, vociferous applause accompanied by many people stamping and me half-perching on the standing-room rail to see; but this is the only photo that wasn't obstructed by the heads of other enthusiasts: 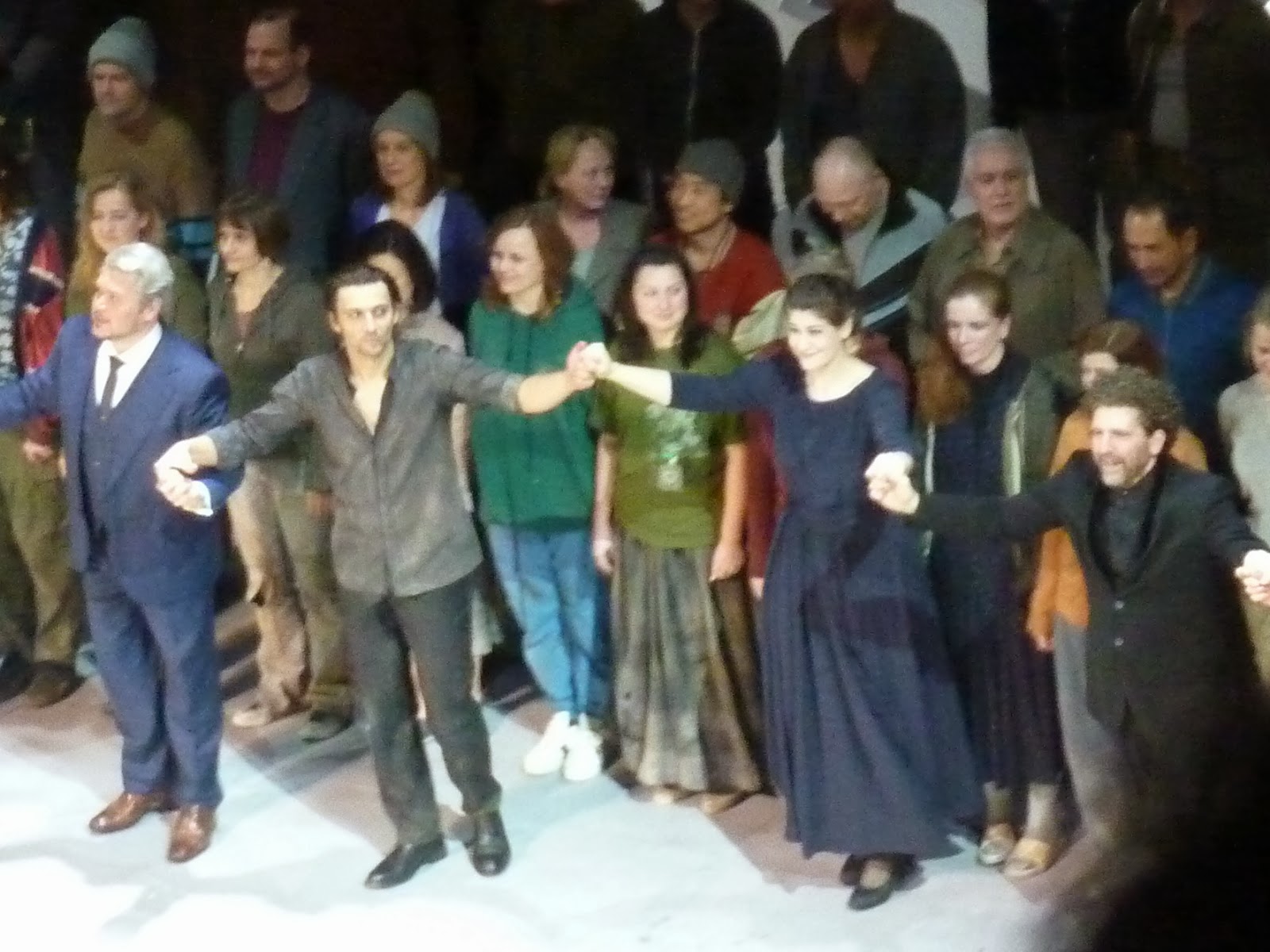