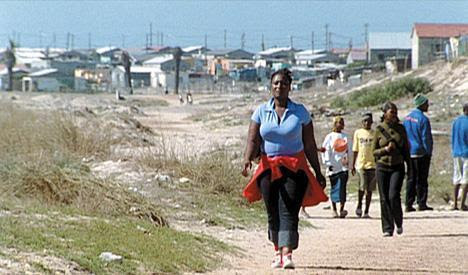 The vibrant, award-winning film U-Carmen eKhayelitsha was released in 2005, but it was a recent and welcome discovery to me (through Netflix's streaming services, of all things.) Directed by Mark Dornford-May, the film is adapted (or, better, transladapted) from Bizet's Carmen, reconfiguring the drama and the music to provide, as Bizet did, a gripping tale that balances between exoticism and realism, mixing gritty quotidian detail with gestures of startling romanticism. The fateful events play out in a suburb of Cape Town, where Carmen enjoys solidarity with the community of cigarette-rollers and marketplace traders, where she can easily disappear in dirt lanes between tin-sided houses to escape the pursuit of the urban police. The setting of urban and suburban South Africa in the late twentieth century is given far more specificity than Bizet's Seville was. Although occasionally self-conscious and semi-guilty about my fascination with the camera's dwelling on unfamiliar landscapes--long stretches of highway through near-desert, bright fabrics on laundry lines--I enjoyed frankly the sensitive delineation of social and religious dynamics in the community where the narrative unfolds.

The libretto/screenplay was translated into Xhosa by Pauline Malefane, who also sang the title role, and I found it stimulating to hear the familiar emotions of the score evoked in an entirely unfamiliar language. The dramatic engagement of the singers was, without exception, commendable, which certainly helped. The chemistry between the singers, and the intensity of their acting, contributed considerably to the emotional impact of the film. The women of the factory are given in the film more solidarity, and more collective and individual personality, than Bizet makes overt. Frasquita and Mercedes are made obviously Carmen's friends and confidantes. The familiar characters of the drama are present: Micaela, outwardly meek and surprisingly determined, Don Jose who can with fatal ease ignore his moral certainties or twist them to justify his own ends. Carmen herself (in a brilliant performance by Malefane) is very clearly a seeker after liberty, and the film refuses to follow Don Jose (and, alas, many opera productions) in viewing her primarily as a seductress and sexual object. I found it refreshingly direct: an immersive, original spin on Bizet's work well worth visiting and revisiting.
Posted by Lucy at 10:01 AM