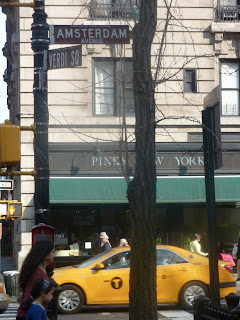 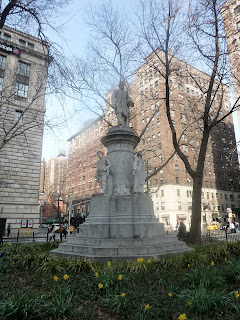 Thanks to Italian-American philanthropy of the early twentieth century, Papa Verdi has a square named after him and a statue in his honor at 72nd Street. Subway commuters and park bench occupants usually seem surprised when I stand still to admire it, but since it's a short walk from the Met, I do so fairly often. As can be seen in the righthand photo above, it is in the grandest tradition of monumental nineteenth-century sculpture. If Verdi were on his plinth surrounded by lyres alone, I'd find it far less interesting... but what gives it its charm, in my opinion, are the figures surrounding Verdi. Grouped around the benevolent master are four of his characters. Whether they seem to be immersed in their own narratives or doing affectionate homage may depend on the angle of light, or one's point of view. The vividness of their expressions makes me hope that the sculptor was an admirer of the composer and his wonderfully human creations. One of the reasons that I keep returning to the sculpture, though, is that I'm still in some doubt about the identity of the statue at the back of Verdi's column; perhaps you, Gentle Readers, can help clarify the matter. 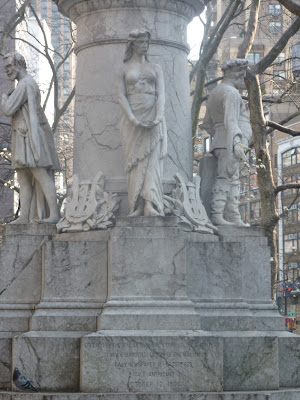 This is the lady who confuses me, with her exotic but historically and culturally vague robes! I thought, at first, that she might be Aida--she's barefoot, and the shawl-like draperies might be modeled on the layered skirts of Egyptian tomb paintings. Then again, her breastplate looks curiously like armor, she herself doesn't look Ethiopian, and she seems to be offering a circlet to someone. Are we looking at Odabella? Abigaille? 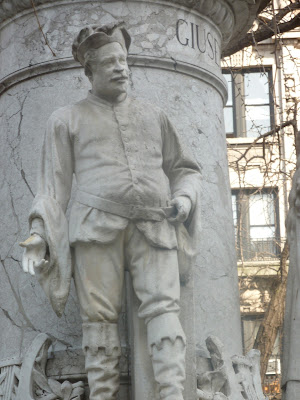 This genial rogue can only be Falstaff. 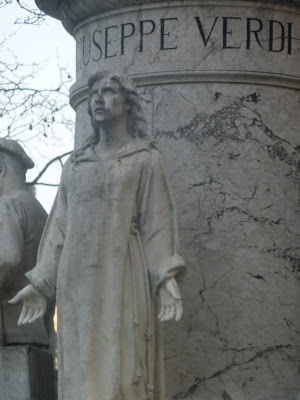 After considerable thought--there are so many self-sacrificing heroines to choose from!--I've come to the tentative conclusion that this is Forza's Leonora. The posture of invocation could belong to Joan of Arc, but the hermit's robe suggests Leonora's "Pace, pace." If you have other theories, let me know! 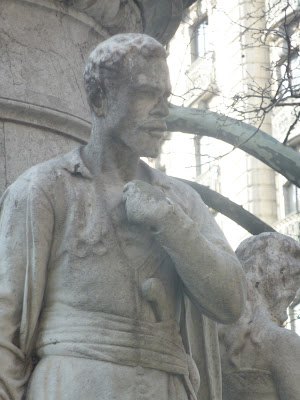 Being wrought, perplexed in the extreme... I find the tragic dignity of this Otello very moving, and I love the resolution in his jaw, the scimitar-like knife in his belt. 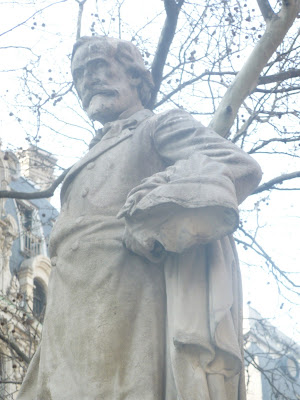 Presiding over them all, the man himself. He's wearing his greatcoat, so what is he carrying over his arm--a theater curtain? I think his somewhat put-out expression may be directed at impertinent pigeons; he's quite nice, really.