And what sort of story shall we hear? Einstein on the Beach 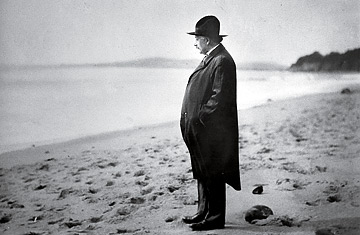 "There are no extra notes in the music; there are no notes that don't belong. There are only the notes that I need." --Philip Glass (Writings on Glass

Attending a performance of Einstein on the Beach, a work where the importance of subjectivity in its reception is deliberately highlighted, was an exhilarating prospect, but also one that conferred on me a sense of special responsibility. I read scholarly essays and listened to a recording

and read the work's texts; in the week preceding the opening of Einstein's run at the Brooklyn Academy of Music, I read pieces in the New Yorker and on BAM's blog. In my reading I found the work defined as minimalist and non-minimalist, modernist and postmodernist; as a work that could barely be counted as an opera, and as a work that redefined the parameters of the genre. Having seen it, I'd be tempted to call it a deliberately disassembled Gesamtkunstwerk (with apologies to Brecht.) This is not to say that it seems disjointed; its episodic structure is given impulsion and an internal logic of sorts by the music, and the intimate connection of the score to the choreography. The work is rich and strange, allusive, mystifying, and hypnotic.

In Friday's performance, the opening knee play offered a Dadaist moment, as the first ten minutes of sound--the throb of the organ, the spoken words of the nameless characters--were busily talked over by most of the balcony. Only when the chanting of numbers began were there sufficient shushers to gather the rest of the audience into quiet. Here, as the backdrop darkened everywhere but behind the reciting women, the stage was set: These are the days. What are we waiting for? Wind for a sailboat; the genesis of an idea. The "Train" sequence shows ever more people, ever busier. A woman marches backwards and forwards; a man writes furiously in the air, as if seeking to draw attention to an invisible mene, tekel, upharsin. Another woman listens to a shell, while still others measure, and read, and march, and write; a boy watches from a tower. At times it seems that all is in a holding pattern of frenetic movement and fruitless waiting--the curse of modernity?--but at the close of the scene a woman pirouettes joyfully across the stage. The long, uneasy trial, with two absurd judges, inevitably recalls Kafka's, with the prisoner in the dock the most rational one there, the only one who seems to perceive beauty. There are also, of course, echoes of Carroll ("They all wrote down on their slates, 'She doesn't believe there's an atom of meaning in it.'") But just as it becomes unbearably claustrophobic, it melts away, into a violin solo hovering between Hanon and mysticism. This in turn leads into a dance whose patterns recall sometimes the gauzy encounters of old-Hollywood dream sequences, sometimes the near-encounters of fated strangers (Dr. Zhivago, for instance, looking up at the candle in Lara's window), and sometimes the endless whirling of Dante's doomed souls in the first ring of Inferno.

"Night Train," for me, was one of the most powerful portions of the evening. A man and woman are on their honeymoon (they wear wedding garments; we measure the passing of weeks by the waxing moon.) They stand illuminated in the last car of a train; it is a scene of hallucinatory, Hitchcockian intensity. Conversation held in solfege and numerals combined strangely in my head: Vas-y! Konstantin. Mia famiglia. Unto thee, for... Dances of power and fear and desire end with the woman drawing a revolver. The chanting of voices in the darkness told us nothing of what happened next. We return to the courtroom; has time passed here? Half the room falls away (what if the same thing happened to the Arnolfini portrait?) The judge ventriloquizes a suffrage rally, mocking. On one side of the stage are men behind bars; on the other, the prisoner is a woman. Lying on the bed, she recounts her journey to a prematurely air-conditioned supermarket. "I realized I'd been avoiding the beach." The second dance found me drained, and I dozed fitfully while the wild white figures whirled. In the fourth knee play the Hanon exercises give way, suddenly and disquietingly, to a devil's trill. Madly the violinist plays. The next thing we see is a building that could have been designed by Magritte, as could the sky behind it, the figures in front of it. The chorus gathers in front of the bricked-up mathematician, a second Daedalus. The people wait; the music surges and ebbs. Over Rheingold-recalling chords, the bar of light in "Bed" moves so slowly it seems at first like illusion. Once the movement is perceived, though, it feels inevitable; it's accompanied by a soprano vocalise. Out of this exquisitely measured progression comes, suddenly, "Spaceship." Even the path of light is curved; Einstein's terrifying paradoxese and fearsome calculations are visualized, drawing more and more people to serve them, until the scrim descends with the effects of nuclear explosion neatly calculated. (Incidentally, I found this treatment of the atomic bomb much more effective, emotionally, than McAnuff's in Faust.) What can remain after so much destruction? Two lovers on a bench, their bodies touching. Maybe this is all. But maybe this--the courage of two human beings, to articulate and act on their mutual desire--is enough. According to Wilson and Glass, it could be. It could be. 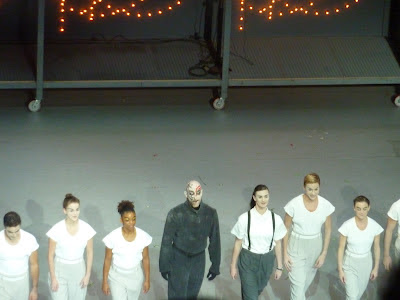 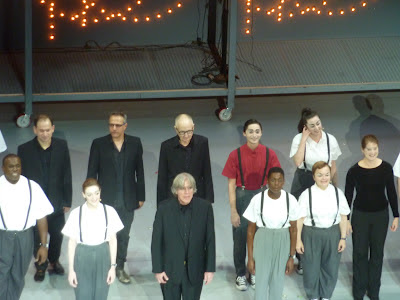 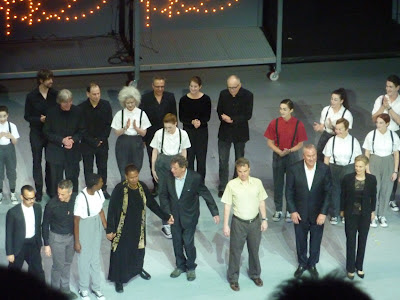 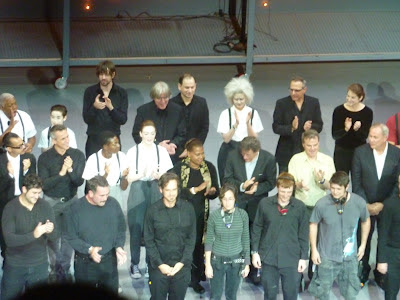