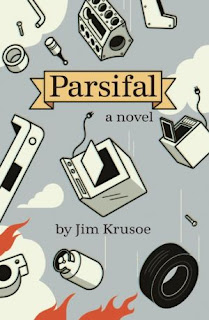 serendipitously, while browsing along the shelves of the local library. Intrigued by the title, I picked it up; having picked it up, I put it down as little as possible before finishing it. I've been picking it up at intervals ever since, wanting to savor particular phrases, or remind myself of how certain revelations are sequenced in the narrative. The tone is imperturbably absurd, and Krusoe's style is allusive, irreverent, and expressive; the prose is studded with small, pleasurable surprises. Our hero, the holy fool, navigates a world where few events are easily explicable, yet transcendent meaning seems to hover not too far out of reach. I laughed aloud more than once at such gems of sentences as: "In other words, Parsifal thought, How would you like it if your place of residence was encircled day and night with a ring of dead and judgmental Aztecs?" I also lost sleep over the darkness and brutality of the book's events, the cumulative effect of which settled in slowly. If you're likely to be inconsolably disturbed by terrible things happening to children, Gentle Readers, I would advise you to proceed with caution. Otherwise, I recommend this book enthusiastically, as an entertaining and thought-provoking work on the power of perception, on good and evil, on spiritual and physical blindness, on the beauty of fountain pens, and on the perils of flying kitchen appliances.

The ways in which the structure and content of the book engage with Wagner's dense and enigmatic opera are astounding in their variety. Most notably, Gurnemanz's famous pronouncement, "Du siehst, mein Sohn, zum Raum wird hier die Zeit,” is made a guiding principle of the book's non-linear organization, as Parsifal wanders through a labyrinth of urban streets and through the pathless forest, and we are gradually taken into his past. As Parsifal attends therapy sessions and looks for the Holy Grail, we the readers are led to reflect on guilt and innocence. Krusoe is doubtless aware of the complex uses of Buddhist and Christian ideas in Wagner's Parsifal; here the former are much more prominent. Where the effects of organized Christianity are (briefly) encountered, they seem ludicrous if not pernicious. If I've correctly identified a significant circling bird as a pelican, however, Krusoe is giving us something very interesting to mull over, as the pelican was viewed as a symbol of Christ throughout the Middle Ages. (It's a long story.) But although the book takes on questions of ultimate meaning with gleeful zest, its tone in doing so remains resolutely playful. Along the way we meet sensual librarians and Herzeleide, encounter allusions to the story of the Fisher King and the long shadow of Nazism, and savor paragraphs with revelations timed like punchlines. What's more, you can read it cover to cover in less time than it takes to listen to the opera.
Posted by Lucy at 8:40 AM