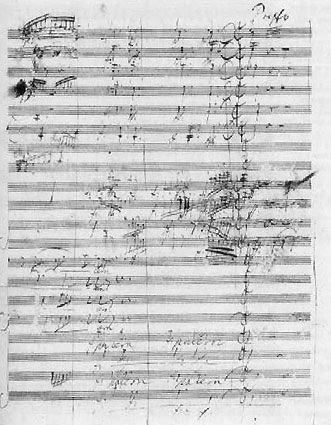 For a work of its vast scope and profound subject, Beethoven's Missa Solemnis seemed surprisingly tame in Tuesday night's performance at Carnegie Hall. The Boston Symphony Orchestra did play with great warmth and beauty of tone. The woodwinds contributed especially lovely work, and the vibrant trumpet fanfares, and the exquisite violin solo of the "Sanctus" (taken by Malcolm Lowe) were also noteworthy. There was, however, what I perceived as a lack of dramatic impetus, with the movements of the Mass blending into each other with great elegance, but little contrast of mood. More emotional engagement and dynamic nuance came from the Tanglewood Chorus, who were superb throughout. Their sound was thrilling, their diction incisive (and they sang from memory.) It is perhaps relevant to note that John Oliver, who led the combined forces in place of an indisposed Kurt Masur, had (presumably) significantly more rehearsal time with the latter ensemble than the former.

The caliber of the soloists brought together for the performance was exceptional. Oddly (to my mind) they were positioned behind the woodwinds, just in front of the chorus; having the sound balanced this way meant that the vocal lines didn't really emerge in the way I was expecting. I assume this was an interpretative choice, but I didn't get a strong sense of its objective. Christine Brewer seemed to be coping with some vocal indisposition. My first reaction to her sound was one of astonished joy at the clear, bright tone cutting through the orchestra. There were a few moments, however, where this sound seemed to disappear on her, or not respond as expected. She forged on valiantly, singing with clear emotional commitment. Simon O'Neill, not having to contend with a Mahlerian orchestra, sounded more at ease than when I've heard him in the past. His sound can have a pinched quality, especially at the top of his range, which is not to my taste, but he sang strongly throughout. The mezzo part was given brightness and warmth by Michelle DeYoung, who shaped her phrases beautifully, with expressive coloring of her sound. Much-needed musical gravitas was contributed by Eric Owens. His rich, solid bass was especially eloquent in the "Agnus Dei," but he contributed charismatic singing throughout. As a whole, it was a performance with much to recommend it, but which didn't fully communicate the absorbing passion, the dark, wild solemnity at its heart.
Posted by Lucy at 12:31 AM