The Jossi Wieler and Sergio Morabito production of Siegfried is, so far, the installment of the Stuttgart Ring I've liked best. It has a wildly different atmosphere for each act, but its sets become progressively less realistic, with Mime's shabby, cluttered 1960s house (complete with hideous couch) giving way to a nuclear-dystopian abandoned factory where Siegfried's lack of fear is truly impressive under the circumstances. Later on, we see Erda-as-Sylvia-Plath (I think) in a shabby, dim apartment.  The cleanliness and spaciousness of Brünnhilde's bedroom, after all this, is a palpable relief, though the room is starkly, blindingly white (with the exception of the bed's rich green covers. No, it's not subtle. But neither is the breathless finale of Wagner's music.)  From the opening of the opera, which finds Mime in an apron, peeling potatoes, to its conclusion, with Siegfried and his bride botching their attempts to put a new sheet on the bed, the production is preoccupied with gender and gendered roles. An easy target, perhaps, but I thought the production treated it thoughtfully. Occasionally it felt as though an idea was stuffed in and left under-developed, but on the whole I found it effective and interesting. The orchestra, under Lothar Zagrosek, was richly atmospheric and richly nuanced.  And I was very impressed by Jon Fredric West's well sung, unusually sympathetic Siegfried.

Heinz Göhring's Mime was long-suffering and pathetically, even pathologically insecure. He and Siegfried miscommunicated with great earnestness on both sides. The Wanderer is a badly-aging would-be-rocker in jeans, sunglasses, and a black leather jacket (Wolfgang Schöne.) He torments Mime in a riddle game turned Russian roulette, as insecure, perhaps, as the dwarf, and observes Siegfried's forging of the sword with smug gratification. Siegfried's own outbursts of petulant violence towards his foster parent appear not as malicious, but as the fumbling, frustrated attempts of a child to make himself understood, and to understand his world. I was profoundly glad to listen to a Siegfried whom I didn't feel I had to worry about. He trumpeted with gusto, but also found very touching expression for singing about Sieglinde. When we find Fafner (Attila Jun,) he is wearing a t-shirt identical to Siegfried's own, but with the hero's name backwards across it (oh, and he's not a dragon at all, just a man sitting in what I think was an abandoned nuclear power plant.) Both end up smudged with blood. Which was so conspicuous that, for me, it backfired; maybe my reluctance to be convinced that a dragon who has taken over a power plant is morally equal to our naive protagonist is a sign of too much literal-mindedness on my part.
From this scene on, Siegfried has a new guide in the Waldvogel of Gabriela Herrera, who is personified as a blind, androgynous youth. I presumed, from the Waldvogel's sickly and traumatized air, that it was a victim of whatever happened at the power plant; the program notes told me it was supposed to represent the erotic impulse. Oh, that blind, androgynous youth? I didn't get that. (I may just stop reading the notes after watching; they're not by the directors.)  Anyway, she sang admirably. Why she climbed into Erda's wardrobe is a mystery to me. The scene between Wotan and Erda (Helene Ranada) I found brilliantly unsettling. She's not sleeping when Wotan enters; she's writing. She puts away the journal when he becomes too insistent to ignore. In addition to looming and leering over her, he eventually steals the journal. She curls up in the shower. It is profoundly messy and patently wrong. So when Siegfried breaks the lead pipe that this horrible old man has picked up to attack him with, my reaction was good riddance. 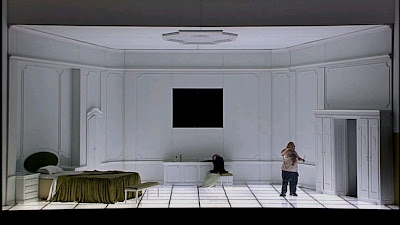 When Siegfried arrives in Brünnhilde's pristine showroom of a bedchamber, he may be clueless, but the audience is confident that the destructive power games of Wotan and Erda are not going to be duplicated. Siegfried's overwhelmed alarm I found the more moving for its setting; this place, and this woman, are so patently unlike anything he has ever seen before. I was more impressed with West, in the final scene, than with Lisa Gasteen's Brünnhilde, but the dramatic unfolding of the scene and the vocal fireworks were well-handled. The lovers-to-be are at cross-purposes for much of it. Once she learns Siegfried's identity, Brünnhilde is collected and purposeful about the implementation of her amorous plans. Siegfried, triumphantly confident in his own identity, is nevertheless very confused about this woman he has found and what exactly she expects of him. But the orchestra, with deliciously transparent textures, soars and caresses and entices. He figures it out. I hope that my warming to this production isn't solely based on the relief of Figuring Out What The Big Idea Was. I like to think, anyway, that I liked it because it has a set of ideas that it develops throughout, and that fit the momentum of the drama and music while being a bit subversive of the expected emotional relationships between the various characters.
Posted by Lucy at 8:26 AM