My Philadelphia Orchestra: Tribute in Tribulation

This past weekend, there was big and shocking news for the classical music world: the Philadelphia Orchestra filed for bankruptcy.  The Philadelphia Orchestra.  I say "shocking news"; maybe better-informed folks were less than surprised, but I was both taken aback and deeply distressed. The most detailed response I've seen in the news comes from Peter Dobrin in the Philadelphia Inquirer.  Musicians distributed leaflets and staged "play-ins" before the board's declaration of bankruptcy; in the aftermath, the official message of the orchestra carried unpleasant overtones of desperation.  As if that weren't enough, the American Federation of Musicians has denounced the move.  The orchestra's Twitter account continues to try to drum up support.  Its website says they're restructuring. Under these messy and murky circumstances, I'm disinclined to obey the frantic plea for financial help.  But I resist this plea only by gritting my teeth and repeating, mantra-like, "solution for the musicians, solution for the musicians."  Because I do love the Philadelphia Orchestra.  I think of it not only as the, but as my Philadelphia Orchestra.  And to relieve my mind, and in deep gratitude to all the musicians who have made, and continue to make the orchestra what it is, here is why.

The Philadelphia Orchestra was my first orchestra. I don't remember the date of my first Saturday morning Children's Concert; I think I must have been around six.  Going to the concert was always a ritual: getting up, getting dressed in my best (invariably, with white tights and patent leather Mary Janes) and going with my mother to meet my best friend Stephanie and her dad, who drove us all into the city.  At some level, I still think of the steps of the Academy of Music as huge.  To the interior I gave my instant love: the foyer had marble floors, and the giant staircases flanking it were carpeted in a loud, over-sized floral pattern which I thought was simply magnificent.  I always took my time ascending and descending these stairs; it made me feel like Cinderella.  Although there were always smiling ushers to hand out programs (which had line drawings inspired by the music on the covers; Stephanie and I would color them in afterwards,) I liked to take mine from the elegant fluted basins on the wall.  And then there was that chandelier, and the painted ceiling. 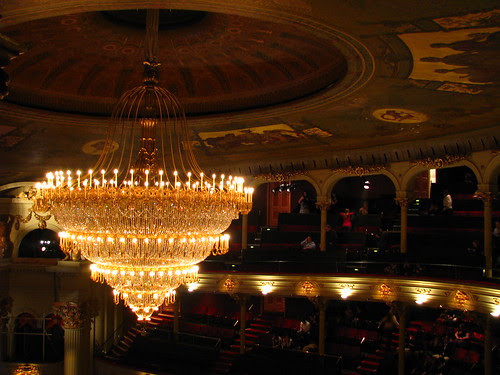 But of course, I didn't fall in love with the orchestra for their building.  I'm sure the Respected Father must have given me some sort of preparatory speech about how there was nothing in the world like hearing a great orchestra play great music live; he certainly made remarks to that effect at regular intervals.  In any case... I loved it.  I don't remember the first piece I heard.  I couldn't even name more than a predictable handful of performances that stood out: Peter and the Wolf, the Firebird suite, the Carnival of the Animals.  But how I loved those concerts!  That they did not happen every Saturday was a source of great chagrin to me.  The pieces, as I recall, were often, perhaps invariably, introduced with information about their composer and context.  Sometimes youthful musicians who had won area contests would perform with the orchestra.  This was exciting, but it also made me very jealous (my mother never failed to use this opportunity to encourage me to practice more.)
I don't, alas, remember details of my musical experiences, though I'm tempted to attribute my early passion for Beethoven's Seventh Symphony to this source.  I remember, once we got past the grand stairs, charging up the boring ones to get to our seats in the Family Circle.  I remember once being so irrepressibly excited by a concert that, when we spied the conductor downstairs, my mother told me to go up and say thank you (as an encouragement, I imagine, either to work the excitement off or overcome shyness.)  So elated was I that, with only slight hesitation, I marched up to the man and tugged on his coattail to get his attention.  The men standing with Riccardo Muti laughed; he didn't, but listened, and shook my hand.  Once my younger sister and I had both reached a reliably non-fidgety age, my father took us in to rehearsals sometimes.  I thought that Wolfgang Sawallisch was awfully picky.  We got to go backstage, where all the musicians we saw were friendly, and I even got to hold a trumpet.  Without the economies of children's concerts, visits became somewhat more rare, but the Respected Father would find some selection of unmissable events from the season brochure, and into the city we would all duly go.
To what tends all this?  My love for the Philadelphia Orchestra is based on something far more solid than nostalgia.  Those childhood concerts gave me an appreciation for--an addiction to--hearing great music performed live by great musicians. Though I've never found anything to equal that floral carpet, I think it's fair to say that those concerts shaped me into a person for whom entering a concert hall feels half like entering a place of worship, and half like coming home.  So not only for all the great experiences I've had with the Philadelphia Orchestra, but also for the great musical experiences I've had around the world, and might not have done if they hadn't taught a seven-year-old in Mary Janes to love concert halls and what went on in them, I am grateful. I'll be continuing to follow the story of how the Philadelphia Orchestra's future unfolds.  And the instant I see a solution that looks supportive of its magnificent musicians, I'll pounce on it.  Not only because it is the Philadelphia Orchestra, but because it still feels like my Philadelphia Orchestra.
Posted by Lucy at 9:47 PM