Tchaikovsky, Trpčeski, and the NYPhil

Had it not been for the prospect of hearing Simon Trpčeski play Tchaikovsky's second piano concerto, I might have given the Philharmonic's last "summertime classics" concert a miss. As it was, I went, marveled at Trpčeski's performance, and enjoyed the noisy pleasures of the Festival Coronation March and the 1812 Overture. And the selections from Swan Lake turned out not to be the clichéd ones I was half-fearing, but a substantial excerpt selected by conductor Bramwell Tovey. On the whole, a quite successful evening. 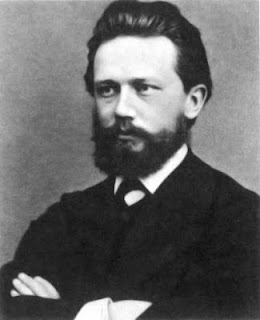 The Festival Coronation March, occasional music for that grandest of occasions, the 1853 coronation of Czar Alexander III, is solemn and jubilant by turns, and unmistakably celebrating its own importance as well as that of the occasion. "Look!" say the brass, "are we not splendid?" "Just think of it," urge the strings: "is this not grand?" The New York Philharmonic--almost incongruously, it seemed to me--played it with an air of resolute conviction belonging to that time of sweeping skirts and vast empires. The second piano concerto made a welcome change to the abstract and virtuosic, and was given with no less gusto. (I sometimes forget Tchaikovsky's enthusiasm for noise.) After some opening remarks by Tovey on the piece's structure, they were launched and away, and it seemed that Trpčeski scarcely paused for breath during the first movement. After about five minutes, I found myself quite literally open-mouthed. Trpčeski's facility was astonishing; he not only dispatched credulity-defying runs, but created interesting variations in tone and dynamics while doing so. (At one point, with his hands positioned close together, his left seemed almost perpendicular to the Steinway's keys. Another point of interest to me was that Trpčeski often played from the first knuckle. Extraordinary.) The slow movement offered a welcome opportunity to savor more leisurely--and exquisitely beautiful--phrasing. Hearing how the orchestra and soloist brought together the themes of the concerto in the final movement was to me viscerally exciting.


The "selections from Swan Lake" turned out to be from Act IV, programmed at the instigation of Tovey, and prompted by his experience conducting the ballet. The tense courtliness of the ball was nicely evoked, the desperation of the prince and swan-princess, I thought, thoughtfully treated, suggesting the reasons for their anguish rather than the mere fact of it. The contrasts between brutality and bliss in the finale were wholeheartedly indulged in, and my inner Romantic was delighted. (Also delightful was noting the rapture of two young girls in a box opposite.) I must confess to sharing Tchaikovsky's lack of enthusiasm for the 1812 Overture. However, and to their credit, the NYPhil brought out interesting contrasts of mood within the piece, phrasing the 'folk dance' quotations so poignantly that I wanted to reread Anna Karenina. And--maybe I'd been brought to unusual susceptibility by the rest of the evening--I found myself moved by the ringing of the bells of Moscow at the conclusion, a city's sigh of relief. My inner Romantic was positively wallowing in indulgence.