Monumental verisimilitude is the hallmark of the Met's Aida, designed by Sonja Frisell on a deliberately grand scale. Those who like an Aida production to be reminiscent of the Egyptian wing at the Metropolitan Museum of Art will not be disappointed. Once dutifully parked, Tuesday night's cast of singers sang strongly and well. Thanks to their fine work and that of the orchestra under Fabio Luisi, the evening had minimal bombast and genuine musical excitement, though the careful attention to realistic detail lavished on the wall paintings was absent from the Personenregie.

Although the visuals of David Alden's new Ballo in Maschera for the Met may be more impressive than its concept, I'm still prepared to count it as a laudable effort, and a welcome addition to the Met's generally conservative repertory of productions. I found some details questionable (e.g. dubiously consensual sex in the background of Ulrica's scene,) and some excessively literal in their symbolism (e.g. the king walking over an abyss in Act II, the three principals standing at the points of a triangle in Act III) but the concept, structured around the feckless king and emphasizing chiaroscuro contrasts, was functional, and notable for its attention to Verdi's score. Alden embraced the melodrama of plot and music, another characteristic shared with the films of the '30s and '40s which formed the production's aesthetic, but I found this often emotionally gripping, especially in the courtiers' mockery of Ulrica. As many of you may have gathered, Gentle Readers, I'd far rather see an idea executed with mixed success (or even a mixed bag of ideas) than a non-attempt at providing a meaningful staging.

In Alden's production, it is the recklessness of Gustavo (his hamartia) which drives the action. The pleasure-loving and self-dramatizing monarch flirts with the contempt of the conspirators, openly mocks the insight and the power of Ulrica (clearly he's never read the classical dramatists), dismisses his friend's advice and undervalues his courage, and isn't even particularly interested in understanding Amelia. The frivolous page, Oscar, is established as a sort of alter ego to the king: he is an Icarus figure in the staged prelude and at the masked ball, expressing his monarch's emotional states throughout. Alden emphasizes Gustavo's flaws, but does not neglect his genuine generosity, which is praised by all in the denouement. The moods and morals of the evening having been expressed in shades of grey, I was surprised by the light-flooded triumphalism of the finale, but like many an old Hollywood ending, this one leaves the future uncertain. Incidentally, the sinister splendors of the final scene (think Litvak's Mayerling

) should show the Met audience that spectacle doesn't have to come coated in glitter or burdened by brocade.

The performance of Alban Berg's Wozzeck given by Esa-Pekka Salonen and the Philharmonia orchestra on Monday was of a lucid beauty that did nothing to diminish the impact of the work's bitter, brutal narrative. Salonen and the orchestra gave a reading of the score that was dynamically and expressively nuanced, richly textured without being dense. The relationship between orchestra and singers was symbiotic, creating an atmosphere that was unremittingly intense throughout the changes of mood between scenes. In the performance of Simon Keenlyside in the title role, the anxiety and anguish present throughout the opera seemed to find their distillation.

My deep affection for mezzo-soprano Joyce DiDonato is one of this blog's most open secrets. I wasn't sure, however, what to expect of her voice in the baroque arias and scenes which form the material of her newest CD

and her current recital tour. In the event, the anxieties with which I came to Carnegie Hall were quieted and my hopes exceeded. The gimmick of the title was not permitted to control DiDonato's portrayals of the mythical queens, princesses, and empresses as distinct individuals in clearly delineated emotional situations. DiDonato varied her technique and her characterization to a degree that surprised me, showing the meaning of queenship to be both personal and situational. Her control of phrasing was good, and the musical repetitions were made meaningful with varied color as well as ornamentation. Il Complesso Barocco complemented DiDonato in amazing collaborative music making. Their performance--thrilling, sophisticated, engaging--might have stolen the show from a less accomplished or less gifted artist. With DiDonato, they offered confirmation that the best way to present material to an audience likely to be unfamiliar with it is with daring excellence.

No small part of the Richard Tucker Gala's charm lies in its oddities and incongruities. An endearingly informal introduction embraces the audience as an almost timeless opera-going community, in a tone suited to a gathering of friends. The gala itself, filled with singers fortuitously present in New York City, presents a cornucopia of opera excerpts with no clear organizing principle, except perhaps the preferences of the singers. This year, honoree Ailyn Pérez thoroughly charmed an audience who seemed determined to express their rapture by applauding not only early and long, but also in the middle of scenes. Members of the Met orchestra played with noisy gusto for Patrick Summers, whose efforts at keeping orchestra and singers in sync were not always successful. Out of this cheerful chaos, Gentle Readers, I have distilled several lessons. 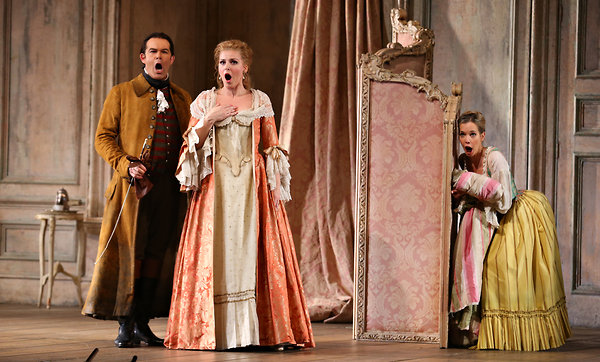 It turns out that a sublime "Contessa, perdono" covers a multitude of sins. But the slipshod slapstick dominating this revival of Le Nozze at the Met has much to atone for. Politics were all but absent from the stage, and subtlety was in sadly short supply. Scarcely an opportunity for broad comedy or bawdy flirtation was passed over; while the first was merely tiresome, the latter, without a clear dramatic function, threatened to be merely confusing. Although the events of the "folle giornata" verged dangerously close to the episodic, the evening did have its strengths. David Robertson led a fleet, attentive account of the score, and the orchestra contributed much-desired emotional tension and nuance to the performance. Some issues of stage-pit synchronization were outweighed, in my view, by this considerable gain. The performances of the women were stronger than I had feared (cf. Zerbinetta's earlier report) but the more convincing performances belonged to the men, with Gerald Finley's Count a standout. The final scene brought me, if temporarily, from a somewhat detached and slightly disgruntled audience member to a helplessly weeping, delighted participant in Mozart and Da Ponte's glorious celebration of forgiveness. The bizarre lights on the tilting facade of the palace (originally intended to be fireworks with undertones of French Revolution?) distracted me again, but there was that moment, and I cherish it.