In Mainz's new Don Giovanni, opera's most famous amoralist is placed in a dystopian dictatorship that seems uncomfortably familiar to today's newspaper-reading public. Liberty is more of a slogan than an ideal. The production, by Tilman Knabe is very busy, and dark in a literal as well as metaphorical sense, which influenced my sense that the events on stage might have benefited from more stylization, or more specificity. The tensions between different elements of the production sometimes struck me as counterproductive rather than fruitful. The events take place in a heavily militarized society with an unfree press and moral policing that selectively borrows religious trappings (the Commendatore has a huge pectoral cross, and appears on a balcony clad in papal white; but this is no theocracy, as Donna Anna's confidential aides are conservatively-dressed Muslim women.) No one, however, appears to have any trouble accessing machine guns. As my housemate and I discussed at the interval, it was very difficult to determine who was on whose side, or if there were sides at all; everyone is using everyone else with cheerful selfishness. Although Don Giovanni appears as the political ally of radical feminists (!!) the notion that the personal is political is one he blithely ignores, as he continues exploiting (and sometimes assaulting) women for his own gratification. This is a society where the rich have inherited the earth; Donna Elvira's conspicuous consumption shields her (partly) from the violence suffered by the other women in the piece. The indignation against Giovanni rings more than usually hollow, as Masetto routinely beats Zerlina (who is wheeled on-stage in a shopping cart); Ottavio is constantly policing Donna Anna's behavior. Donna Anna arranges the Commendatore's assassination and attempts to take his political position; making Don G. the scapegoat fulfills a double goal. But her gender dooms this endeavor: she gives Masetto the right answers to preserve her feminine virtue in his eyes, but refusing him is a crime for which she is punished through an armed coup. Don Giovanni, having barely escaped death by torture, survives… but for how long? and do we want him to? I really appreciated that Knabe's production took the inflammatory politics of the Mozart/Da Ponte masterpiece seriously; I just wished  the whole had been more coherent.

Elfriede Jelinek's 2013 Rein Gold is a text of many complexities, not the least of which is its genre. The prose work is subtitled as a “Bühnenessay,” an essay for the stage, and the audience is sometimes directly addressed as if sitting in a theater, applauding or restless or hissing. But the identity of the text as writing is also discussed. Brünnhilde is imagined as armed with a typewriter, to wield against her father’s rune-written spear. It is a meditation on the events of the Ring Cycle, on the creation of the Ring Cycle, and on its reception. It is also a meditation on the ways in which Wagner and his work have been interpreted, fetishized, and abused. The sprawling, death-marked, perhaps-renewable system of 20th- and 21st-century capitalism is also woven into the texture of the work, appearing like a reflection of the Ring’s events... or a transformed leitmotif. If I were putting it on my bookshelves, it would be at home next to the libretti or Zizek’s Living in the End Times.

The Hungarian State Opera is a beautiful house. "I don't say it is nicer than Vienna's," said the woman who ran the pension where I stayed, "but it is at least as beautiful, and more gemütlich." A businessman from Hannover with whom I got chatting at the interval raved about it as one of Europe's loveliest and most opulent opera houses. I too appreciated the warm marbles and heavy wood in the corridors, the gold-inlaid titles of 19th-century crowd-pleasers (Norma, Aida, Robert le Diable) on the upper balcony. Unfortunately, the presentation of the opera on stage, as well as the much-touted twice-daily tours, suggested that the management views this gorgeous building more as a museum than a theater. 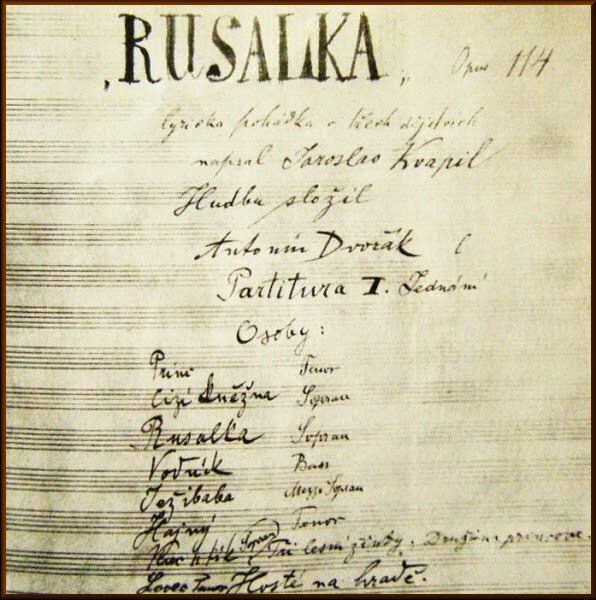 My experience of the Budapest Festival Orchestra reads like an optimistic statistician's assessment of the effects of orchestra tours on cultural tourism. Having heard the orchestra several times in New York, I convinced my mother and sister that their plans for a long weekend in Budapest had to be combined with hearing the BFO at home. My advocacy was the more impassioned because Rusalka was on the schedule. My high expectations were not disappointed, and the acoustics of the Béla Bartók proved to be delightful, with the gently curved exterior walls allowing for warm resonance that served the orchestral sound well. I quite liked the aesthetic of the hall, too. Under the leadership of Iván Fischer, the BFO gave Dvořák's atmospheric score with rich nuance and dramatic sweep. In this concert performance, the singers also gave performances notable for emotional depth as well as vocal subtlety.

The challenges of giving Rusalka in a concert performance were met almost ideally. My reservation comes chiefly from a feeling that the singers, all off book, could have done still more if given additional space for interaction. The impassioned orchestral performance was richly evocative of Dvořák's forests and moonlight and shimmering, mysterious waters. Even the ball scene, which I can find dull, was filled with drama. Iván Fischer's impassioned and precise conducting was a joy to watch, considerable range of gesture (from a slight movement of the hands to near-dancing) bringing out corresponding range in orchestral expression. Tempi were subtly varied, and Fischer used dynamics boldly and effectively. Although there were a few brass quavers, the hunting horns were lovely, and the percussion was impressively responsive. The strings conveyed warmth and warning with equal facility, and special tribute should be paid to the ethereal woodwinds. The score's intricately woven motifs emerged poignantly; more importantly, so did its emotional directness. Friday's performance conveyed powerfully that, although Dvořák's water sprites and witches may be the stuff of fairy tales, its drama of love and jealousy, folly and hope and forgiveness, is viscerally human.

It seemed appropriate to me to begin the month of May with Frankfurt's Tristan und Isolde, an opera I've loved since hearing it cold as my first live Wagner. Frankfurt's current run boasts not only an impressive pair of lovers in Lance Ryan and Jennifer Wilson, but strong performances in further roles, and a rich reading of the score from conductor Stefan Blunier. Christof Nel's atmospheric production is a darkly pessimistic one, suggesting that there can be no comfort this side of death, and even that is denied to Isolde. The man next to me dozed stertorously through much of the first act, and whispered more than once in the second two… but I was gripped and moved.