A recital by either Renée Fleming or Susan Graham is invariably an eagerly anticipated event; the Carnegie Hall recital which the two divas gave jointly was an evening in which their musical and personal chemistry made enchanting a journey through the salon music of the Belle Époque, with a few detours on to its operatic stage. Images from the concert may be found here. Since Graham and Fleming's off-stage personae (and relationship) are so well known, I thought the device of having them act as hosts of their own salon evening, providing historical background (and naughty anecdotes!) concerning the works presented, was a clever and effective one. Historian that I am, I was delighted to learn more of Mary Garden and Sybil Sanderson, as well as charmed by the women who so ably sang the repertoire created for them (full program here.)

I'd seen La Rondine when the Met's current production opened four years ago, but caught the last performance in this season's run for the sake of Kristine Opolais, Puccini's shimmering score, and contemplating its place in the anxious political and cultural upheavals of the early twentieth century (cf. this New York Times article.) Nicolas Joel's setting of the production in the 1920s makes the social constraints and social experimentation of the piece poignantly resonant. Kristine Opolais' unusual voice and compelling presence made Magda more interesting to me than I've found her in the past. That both Magda's and Lisette's attempts at changing their lot end in failure is still a tragedy, but there is a sense that in the attempts themselves, something has been achieved.
Read more »
Posted by Lucy at 1:27 AM No comments:

Unlike the miller of Schubert's cycle, I asked no one what path I should take before heading to Princeton to hear Jonas Kaufmann and Helmut Deutsch perform Die schöne Müllerin. The sold-out recital proved well worth the journey. In this interpretation of the cycle, Kaufmann focused on the dark side of the piece's Romanticism: the miller's refusal to compromise, to accept human frailty, to doubt signs of destiny. Helmut Deutsch's intelligent, incisive handling of the piano part complemented Kaufmann's approach beautifully, echoing the miller's open-hearted optimism, or providing its disturbing counterpoise in the voice of the wise, remorseless stream.

A tragic history repeats itself as an irony-laced tragicomedy on the operatic stage: Rossini's 1817 La Gazza Ladra, although bookended with joyous choruses, contains fictions of potentially explosive power, set to music of often surprising complexity. A serving girl, Ninetta is unjustly accused of theft, libidinously desired by the local mayor, innocently charged with protecting her father from the consequences of deserting the army, and yearningly in love with the son of the family in whose household she works. With the aid of more than one deus ex machina, all of these intrigues have a satisfactory denouement, in striking contrast to the accusation and execution which inspired the opera. But there is more than a little Rossinian mockery at work, of social as well as operatic conventions. The drama hovers experimentally between genres. Melodramatic confessions and confrontations are misunderstood or interrupted, and conventions are gently satirized even as they are enacted. Although the soprano is decorously transferred from the embraces of a father to those of a husband, she is practically pushed into the latter's arms after she has asked to be reunited with the mezzo en travesti. The heroine's imprisonment is a mockery, the army is made to look absurd, and the local lord is spectacularly discomfited. After seeing Saturday's performance by the Bronx Opera, which emphasizes the piece's undeniable charm, I was left with two sources of surprise: that La Gazza Ladra isn't performed more often, and that Foucault never wrote an essay on it.

Language. History. Love. Sex. Opera. The narratives of Incidental Music, Lydia Perović's debut novel, are concerned with all these things, and intertwine to create a satisfying and thought-provoking read. The histories of three women unfold amid the Georgian houses of Toronto and avenues of mid-century Budapest. Rather wonderfully, the events of the novel also take place in internet cafes and on broken pavements, in too-tidy rented rooms and dingy cubicles and academic offices. An abandoned factory can be redeemed by the first encounter of two lovers, an opulent bathhouse become a prison to a lover betrayed. Unusually, each of the three protagonists is in a different life stage. Petra we meet in youth, but after its first flush of optimism has died, leaving only the uncomfortable shards of idealism to spur her on in a city where she feels herself an outsider. The sophisticated Martha inhabits a middle age balanced uneasily between fulfillment and complacency, and is trying to discern the differences between success and stagnation. Romola, a retired operatic diva, is an amazingly charismatic figure, even in the ruin of an old age where a long and painful past insists on infiltrating an increasingly fragile present. 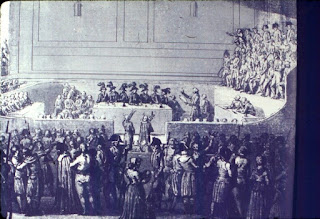 Not only do I like Umberto Giordano's Andrea Chenier, but I will defend it as a barely-guilty pleasure. The libretto by Luigi Illica boasts fairly sophisticated and quite funny French Revolution jokes (as well as several historical howlers. The sometimes too-rich melodies and their instrumentation may feel perhaps a little too predictable, a little too emotionally manipulative... but what a pleasure it can be to be emotionally manipulated! The work premiered in 1896, just after the centenary of the French Revolution, after a century profoundly marked by its shadow, and issues of gender and class are vividly, cruelly highlighted in the drama. The whole thing is more subtle than The Scarlet Pimpernel

, and can be just as much fun, as a quasi-historical and hyper-romantic romp (I'd compare it to Scaramouche

, a less famous novel which I loved even more than the Pimpernel when I was fourteen. But I digress.) Given its due, I believe that the score serves not only to move the melodramatic plot along with thrilling speed, but to make vivid the political and emotional tensions which are intertwined at its heart. I felt, however, that Sunday's performance by the Opera Orchestra of New York lacked romantic and revolutionary fire. Debuting the title role under the handicap of a cold, Roberto Alagna lacked much of his usual elan, and the conducting lacked finesse. Rosalind Elias' Madelon was a highlight, and George Petean was a great discovery as the fascinating Carlo Gerard, but the evening as a whole buckled (to borrow a phrase) more often than it swashed.

Donizetti's Maria Stuarda is unabashedly a one-issue opera. The lineaments of the drama are clear (slimmed down from Schiller's play, with a libretto by Giuseppe Badari), but Donizetti is more interested in providing emotional confrontations than developing context for the political anxieties of Cecil and Elisabetta, or the ambitions of Leicester and Talbot. Even the fraught (and entirely fabricated) romantic triangle between Maria, her ardent lover Leicester, and his ex-lover Elisabetta (!) is presented without explanation, and practically without comment. The opera has the strengths of its selective focus: its tension is derived almost entirely from the uncertain fate of its titular protagonist, prisoner and political liability for the queen of England. As in the case of Anna Bolena, the complexities and obscurities of historical drama have been transmuted to create the ingredients of good Romantic drama: the wronged Maria suffers while the factions of the English court (represented by the sympathetic Talbot and the hostile Cecil) attempt to persuade the hesitating Elisabetta to determine her rival's fate once and for all. The work is well-structured, and the music often exciting, if predictable in the techniques it uses to generate excitement. The Met has given Maria Stuarda a sleek new production and a starry cast, showcasing it in this year's New Year's Eve gala. While I found the performance engaging, I suspect the piece might have been better served by a more irreverent approach to its Romantic conventions.