The Hungarian State Opera is a beautiful house. "I don't say it is nicer than Vienna's," said the woman who ran the pension where I stayed, "but it is at least as beautiful, and more gemütlich." A businessman from Hannover with whom I got chatting at the interval raved about it as one of Europe's loveliest and most opulent opera houses. I too appreciated the warm marbles and heavy wood in the corridors, the gold-inlaid titles of 19th-century crowd-pleasers (Norma, Aida, Robert le Diable) on the upper balcony. Unfortunately, the presentation of the opera on stage, as well as the much-touted twice-daily tours, suggested that the management views this gorgeous building more as a museum than a theater.

I wish I could be more enthusiastic, but the entire production was more of a curiosity than anything. Viktor Nagy was director of the 1998 production; I don't know if he was involved in this season's run. The sets, with postcard-perfect Sant'Andrea and diva-ready chaise-longue, were designed with apparent lack of irony by Tamás Vayer, and Nelly Vágó's costumes provided a look at the opera's performance history. I saw what may be the last Bernhardt-esque Tosca hat in active use. The diva's Act II costume (tiara included) looked as though it had been based on that worn by Callas in '64. The frequent problems with stage/pit synchronization, and the activities of the prompter, suggested brutally limited rehearsal time. Moreover, the singers were given awkward blocking; declamatory poses and stock gestures made a caricature of Tosca's melodrama. The choristers were bizarrely well-behaved, Angelotti mimicked Napoleon's hand-in-waistcoat pose (an allusion to his political sentiments?) and Spoletta, that man of tangled loyalties, fears, and morals, behaved bizarrely like a villain from a German horror film of the 1920s. Given the sheer number of such peculiarities, I'm inclined to place responsibility for them on the (lack of) direction, rather than on individual performers. The use of text and phrase-shaping for dramatic effect was conspicuous by its absence, alas; perhaps, in part at least, due to hard-driven tempi. In the orchestral performance led by János Kovács I did find much to admire. Playing was both coherent and energetic, with a warm, robust sound to strings and brass. From the famous opening chords onwards, the ominous omnipresence of Scarpia's influence was musically emphasized, which I thought effective and apt. More might have been done with variation in tempo and dynamics, but the performance was solid, engaged and engaging enough that the problems in stage-pit coordination were a surprise to me, as well as a distraction. Notwithstanding this, I'm glad I went. My family found the evening entertaining, and I heard some interesting singing, and had the satisfaction of treating the opera house as such, instead of merely a splendid shell.

Trapped in this dusty Tosca was some fine singing. András Palerdi, as Angelotti, had a commanding if somewhat monochromatic bass. The Sacristan of András Hábetler was a standout in terms of vocal and dramatic characterization, making the fussily conservative official essentially good-natured. Michele Kalmandi cut an elegant figure as the sensualist Scarpia, and displayed a solid, muscular baritone. Laudably, he avoided caricature in his portrayal of the baron; I would have liked to hear more sustained phrasing from him, but his choice of verismic effect was a conscious one.  I suspect that Attila B. Kiss, the evening's Cavaradossi, was having an off night. He sounded vocally tense much of the time, and less than comfortable at the top of his range. Neither as lover or firebrand did he seem particularly ardent, but much of that may be attributed to the limitations of the production. Szilvia Rálik, in the title role, did the most of any of the singers to overcome these disadvantages. Rálik wielded her strong, steely soprano well. She brought welcome emotional nuance to Tosca's return to the church in Act I, as well as shaping the arc of "Vissi d'arte" with real feeling. Rálik's clear high notes were also deployed with impressive fierceness. I thought Rálik was at her best when at her most unhinged; in Act III, vocally and dramatically, she seemed to come more fully alive. In her anxiety, her joy, and her despairing anger, it was easy to see in her the leopardess to whom Scarpia compares her. Her wild defiance made a gripping ending; but one to which the rest of the evening provided an all-too-tame preparation. 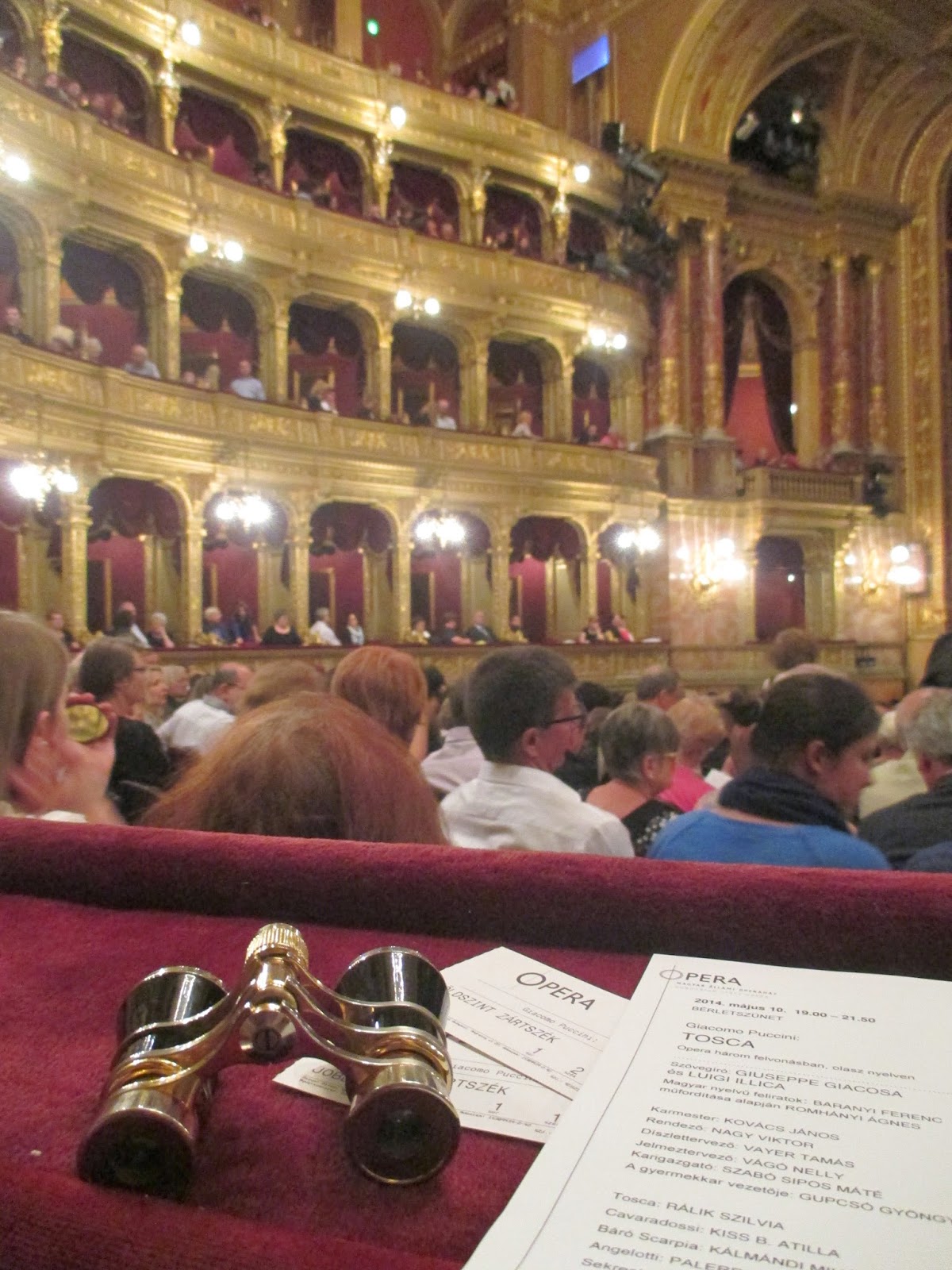 Note for fellow travelers: I got flustered by a misleading seat plan, an impatient box office staffer, and the exchange rate between förint and Euros. Fortunately, these just-off-parkett box seats were  under 40 euros, though more than I'd planned on paying. The sight lines of the top balconies are such that screens depicting the stage have been installed. To judge by looking around the house, the center sections of each balcony seem to have fine sight lines, with the sides being a bit iffier.