All aboard the Bard bus: opera road trip snapshots 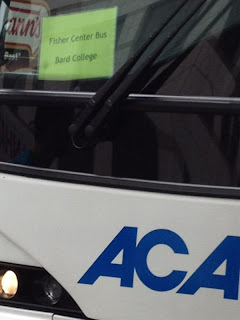 Rarely have I been as excited about the prospect of a bus ride as I was on Friday. True, like most buses, the one pictured on the left was excessively air-conditioned, with seats designed for people with very odd spines; this bus, however, offered non-stop service to an opera festival. The Bard festival clearly knew the audience to which they were offering this service: the pickup point was conveniently located in familiar territory, almost directly behind the Metropolitan Opera. The young man bearing a clipboard also bore a guitar. I half-hoped that this might presage opera sing-alongs, but it didn't (most of the rest of the passengers were very respectable and restrained senior citizens, but what is a lifetime of opera-going for if not to teach you the words to rousing choruses? I jest, of course, Gentle Readers.) We traveled north, noting an increasing frequency of farmers' markets, until we reached... 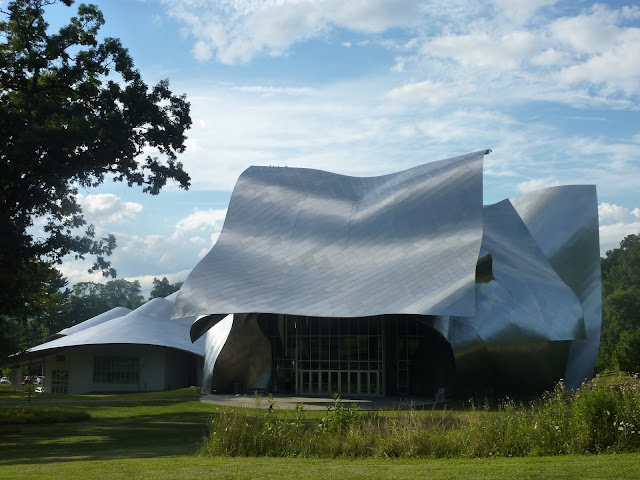 ...the Fisher Center itself! I really liked its architecture. Seen in its broader context, its unusual roofline seems to echo the surrounding hills rather than a spaceship. A note on seating: with student discount, I got a very good cheap seat in a balcony box. Seated in the second box from the stage, in the row overlooking the auditorium rather than next to the hallway, I could see almost the entire stage without difficulty, and the acoustics were fine. Being seated on the hallway side, or further back, might not have been so congenial, but I was well pleased. N.B. that the balcony box chairs, in contrast to the seats in the center of the theater, are not upholstered at all. Still, I was miles closer to the action than in my usual back-of-family-circle perch at the Met, so I felt that I'd snagged a bargain. 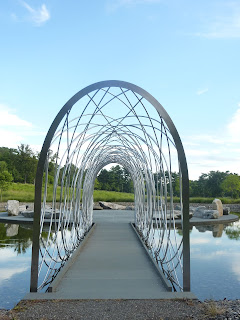 This art installation by Olafur Eliasson is called "Parliament of Reality." I felt that its explanatory blurb suffered from dense over-specificity, but I thought the work itself was really lovely. Whether or not it represents and encourages rational and empathetic discourse is up for debate, but it certainly is beautiful. And philosophers might well argue that Beauty itself encourages rational and empathetic discourse, so there you are. Not pictured is the far less exalted but rather exciting Spiegeltent, with a Belle Epoque facade of carnival quality. On this particular evening it invited to a cabaret evening entitled "Weimar/New York," which it positively pained me to miss. Also not pictured, but important, is a stand offering local dairy ice cream. 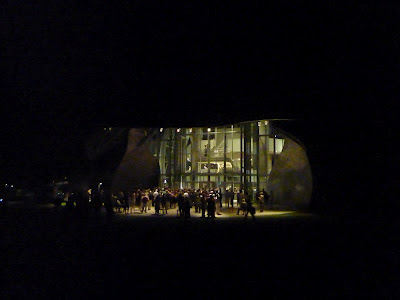 The Fisher Center by night. During the interval, I wanted to briskly pace around the circumference of its lovely patio in the sensible manner of German opera-goers, but most of the audience seemed to want to stand on it in clumps (understandable, for those not facing the prospect of a bus ride.) At some point during the small hours, huddled in my bus seat wishing to doze, I thought, "I'm crazy, aren't I? I'm actually crazy," but by the next morning, after I'd washed and slept, I was already thinking, "I should do this again." Which may prove I'm crazy.
Posted by Lucy at 11:55 AM