G.W. Pabst's 1931 film "Die Dreigroschenoper" left both Brecht and Weill dissatisfied: the material of the 1928 work which so impressed Pabst is rearranged, modified, and abbreviated to create a film which is a fascinating work in its own right. Almost half of Weill's sly music is omitted, some out of concerns for narrative, some out of concerns about censorship. The Brechtian satire which left no area of society untouched is here given a more pointed focus. (As an interesting documentary on the Criterion DVD set

explains, this is largely due to the intervention of Brecht himself, who wanted Pabst to film an entirely new treatment, not the play which had so impressed the film director.) The Act II finale ("Ihr Herrn...") appears over the opening credits, signaling the economic satire that continues in one of the first images of the film: a stockbroker's sign (Chief Offices: Wall Street) revealed over Mackie's shoulder as he sets off on the prowl, following two young ladies who have been indulging in the bourgeois pastime of window-shopping. Sexual mores are also an object of mockery; this is the London of Jack the Ripper, not John Gay, with women in long ruffled skirts, and men in bowlers. It is, however, sometimes difficult to remember that this is ostensibly the English capital, despite the mentions of Scotland Yard; this metropolis is so clearly the product of German Expressionism, close relative to the Berlin of Murnau's The Last Laugh

, with narrow streets of impossible angles, a street singer (Ernst Busch) with posters resembling the work of Egon Schiele, and dance halls and deserted warehouses that might belong to the hidden corners of any early twentieth-century city. 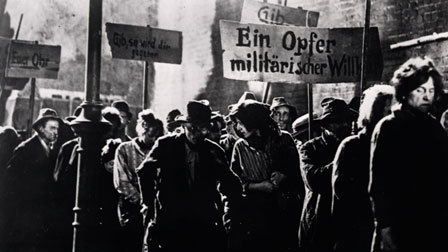 Throughout the film, Pabst plays intelligently with the themes of visibility and invisibility, from the haunting opening lines to the final fade-out, accompanied by a stanza from "Die Morität von Mackie Messer": Denn die einen sind im Dunkeln: Und die andern sind im Licht: Und man siehet die im Lichte: Die im Dunkeln sieht man nicht. Nowhere is this more gripping than in the impressive crowd scene where the beggars of London (caught up in Peachum's exploitative endeavor, but genuine sufferers, as the script is careful to illustrate) overrun the coronation procession, invading and invalidating the carefully constructed image of the ideal polis. Pabst's striking use of the camera extends to the creation of stylish sight gags (a phrase I never thought I'd write) as well as evoking the settings and developing the relationships of the film convincingly. (Perhaps too convincingly for the interests of Verfremdung: these cheerfully amoral characters are unmistakably real people, and not unsympathetic ones.) Brecht and Weill's deliberate mingling of genres, however, remains. The street singer, Ernst Busch, was famous on the cabaret stages of Berlin throughout the 1920s. Carola Neher, too, was primarily a stage and cabaret artist (for whom Brecht wrote several roles, and who fled Berlin after the Nazi advent to power, only to fall victim to the Stalinist purges of the mid-30s.) As in the original stage production of Die Dreigroschenoper, she plays Polly, and does so with a frank sensuality and frank determination which are, even now, surprisingly straightforward. The ballad of Pirate Jenny, however, is sung by Jenny herself, inaugurating a durable performance tradition. Jenny is none other than Lotte Lenya, and she is nothing less than mesmerizing:


In the film, this haunting ballad comes not at the outset, but shortly before the sequence of events which will lead to the film's final, delicious twist.  In 2012, Pabst's new ending has lost the hilarity of the ostensibly absurd: the criminals whose exploits we have followed become bank directors.
Posted by Lucy at 2:00 PM