My theory that it's impossible to leave a good Rossini performance without a smile on your face (and at least one fragment of melody stuck in your head) stands. Despite some less-than-inspired conducting from Maurizio Benini, Wednesday's Barbiere made for a thoroughly enjoyable evening, with fine singing and fine acting from all. Isabel Leonard's vivacious, brilliantly sung Rosina was a delight, as was Rodion Pogossov's irrepressible Figaro. Bartlett Sher's production could be accused of having a gimmick or two too many, but I think the frothy exuberance of it suits the plot and music well.

The conducting of Benini did not strike me as rising to the level of the singers. Tempi were workmanlike, and there was not much dynamic nuance, either (the orchestra almost covered the singers at a few points.) I think I noticed Isabel Leonard and Samuel Ramey giving subtle cues to keep the conductor with them during their arias; this helped. Rossini's score still triumphed, but I wished it had been handled with a lighter touch. The singers, thankfully, handled Rossini's bel canto flourishes and no less extravagant comedy with panache. Maurizio Muraro gave a splendid buffo turn as the deluded Dottor Bartolo, with a warm, solid bass and a perpetually put-upon air. The Don Basilio of Samuel Ramey, who sang with comedic relish and vocal assurance, was likewise a treat.  Ramey's vocal gravitas was used to hilarious effect when the rest of the company is trying to pack him off to bed, and "La calunnia" was a delight.

Alexey Kudrya, in his Met debut, made an ardent Almaviva. He sang with great musical sensitivity, and his serenades to Rosina were lovely. ("Cessa di più resistere" was omitted, which I thought very wise, given that Kudrya sounded somewhat thin at the top of his range.) Isabel Leonard gave the best performance I've heard from her; she handled the challenges of the score not only with skill, but with grace and wit. Rosina's runs and trills were executed beautifully, and were made an integral part of Leonard's vivacious portrayal. Rodion Pogossov was her theatrical equal: a cheeky, charming, and apparently tireless Figaro. With vocal charisma and agility, he was quite plausibly the indispensable engineer of events he claims to be. He shone especially in the duets with Kudrya and Leonard (and of course in their hilarious trio.) It may be cold and rainy in New York, but in sunny Seville, all's right with the world. 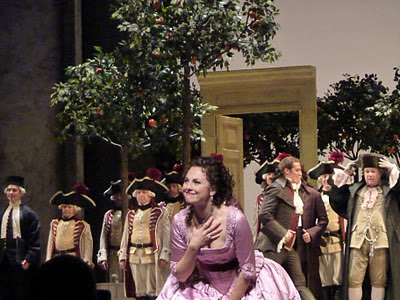