Despite some very fine singing, and some very fine orchestral playing, the Met's new Siegfried was less than fully satisfying. Robert Lepage promised hyperrealism, and this he delivered; the Machine has come into its own as a representational set. But that is all it is (and it nearly ground to a halt, with ominous clanking, between the second and third scenes of Act III; that Siegfried did not fear the fiery cliffs was indeed impressive.) The visual influence of Fritz Lang

was apparent, and I was reminded of a cherished childhood possession, The Story of Siegfried

. This is more than a failure to provide a clear and consistent interpretation; this is a problem. Siegfried is the only one clad completely in "medieval" costume; the rest are more directly inspired by the nineteenth century. I find it hard to believe that anyone charged with directing the Ring could be unaware of, or insensitive to, the problems in depicting Mime and Alberich in working-class clothes of the nineteenth-century, and then making them unrepentant and unsubtle schemers against our nature-child hero. Worse: Mime is made into a child-stealing hunchback. This allows Lepage to visually echo, in the dying Sieglinde's futile reach for her child, the dying Siegmund's reach for his wife. But: that is not how you deal with the question of whether or not Mime is an antisemitic caricature, Robert Lepage. [Update: Likely Impossibilities has a post about this.] After this, Brünnhilde as Pre-Raphaelite fantasy--Waterhouse would have been proud of that radiant, autumn-haired woman, shift-clad in a meadow--seemed positively innocuous. The few non-literal touches in the staging--Wotan causes the sun to turn blood-red in Act I, and unrolls the bark from around his staff in Act III--I found more confusing than illuminating.

All right--deep breath--on to the rest of the Gesamtkunstwerk. I tend to forget how much I like the score of Siegfried, and the Met orchestra reminded me. Fabio Luisi's hallmark precision and restraint were in evidence... and I admit to finding the results slightly disappointing. It was a very clean, clear sound, but the production needed help finding a sense of urgency, danger, sensuality, and I didn't get that. As the Waldvogel, Mojca Erdmann was... very birdlike; her timbre is well suited to the role, though I didn't catch all her consonants. (If you wait for a Wagner post where I don't talk about German consonants, Gentle Readers, you wait in vain.) I love Patricia Bardon's mezzo, but tend to like more contralto gravitas in the role of Erda. I liked her interaction with Terfel's Wanderer, though (and a costume which I am labeling Unintentionally Campy Snow Queen didn't help the gravitas.) Hans-Peter König was a splendid Fafner; his interrogation of Siegfried was suitably chilling (despite a silly snake head.) As Alberich (d'you remember Alberich?) Eric Owens was on excellent form, providing sonorous singing. Gerhard Siegel's Mime was not at all what I expected. His characterization was fine within the scope he was given (not much) but his sound lacked the brightness that I associate traditionally with the role, and habitually with him. I still think he's one of the role's best exponents, and wish he had been given more to do with the character.

Bryn Terfel's Wotan seems to be going from strength to strength; his Wanderer was a highlight of the evening, in terms of both vocal quality and emotional power. He produced warm, smooth sound throughout his range, and gave an admirably nuanced portrayal. Bitter wisdom and bitter weariness--conveyed through fine acting and fine attention to text--made his Wotan vulnerable and sympathetic. Both the conversation with Erda, and the confrontation with Siegfried, were unusually poignant. (I know they always should be, but I sometimes feel that I rely mostly on leitmotivs to tell me this.) Deborah Voigt's Brünnhilde had a head start with me, as the emotional intelligence of her Walküre-portrayal left a lasting and favorable impression. Similar strengths and liabilities characterized her performance in Siegfried. Dramatically, she's still the best Brünnhilde I've seen; vocally, things were on thinner ice. In the midst of problematically pre-Raphaelite meadows, I really appreciated the tenderness and the fierce joy of her portrayal, creating a coherent picture of an intelligent person dealing with uncertainty, rather than a fickle/indecisive woman. "Ewig war ich" I found very moving; she sounded more secure there than in "Heil dir, Sonne." Walküre showed her gaining security over the course of the run, so I'm looking forward to the spring. Jay Hunter Morris was a game and energetic Siegfried, who paced himself admirably (I hate Act III anxiety in Siegfried, and was grateful to be spared it.) His voice, although very pleasant, sounds a bit small for the role in this house, but he gave a committed portrayal. In the lyrical passages of Act II he was at his best, although he also successfully choked me up in Act III (look how sad you made Wotan with that leitmotiv, Siegfried!) He and Voigt had good chemistry, and the ending was appropriately fierce. Götterdämm'rung, dunkle herauf! 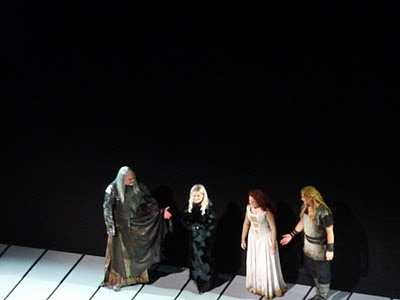 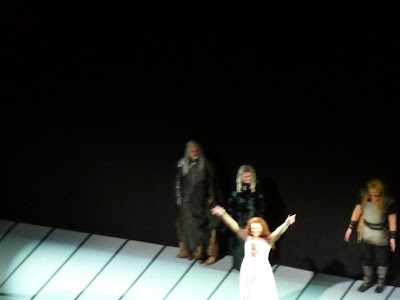 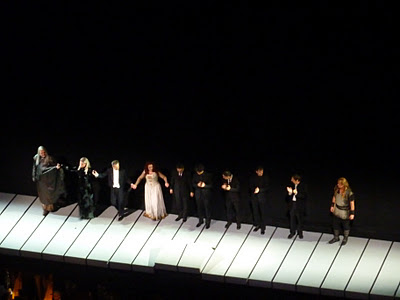