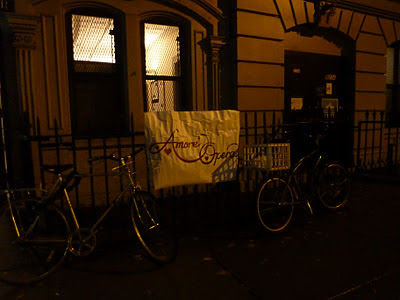 "This is an awfully long opera," said the man seated behind me at The Marriage of Figaro on Friday, "but there isn't a bad bit in it." Amore Opera has opened their third season in style with what is arguably the most transcendent of human comedies, a gem among gems of the operatic repertoire. The cheerful good humor shared by staff and audience seemed a fitting tribute to Mozart's masterpiece. The informal hospitality of hors d'oeuvres and wine shared by chatting groups of friends and strangers made the lobby of the Connelly Theater seem a sort of natural extension of the count's household. The intimate size of the theater (which seats just a hundred) also contributed to the cozy atmosphere of an evening which had clearly been prepared with love.

José Alejandro Guzmán, conducting, was attentive to singers and players, correcting for coordination more than once. The orchestra sounded noticeably ragged at times, but this may improve over the course of the run. The game string section was done no favors by the humidity of the warm room, which caused some tuning issues. I could have looked for more nuance in dynamics and tempi, but the playing supported the action on stage. Generally, this emphasized the comedies of the piece rather than its tragedies (and, parenthetically, I was surprised by what I perceived as a lack of eroticism. Perhaps this may change as the singers settle into the production.) All of the singers were done a disservice by the English translation. A majority of the audience seemed to be unfamiliar with the opera (to judge by the synopsis-checking that was going on around me, and the breathless suspense with which my seat neighbor followed the concealments of Cherubino) so I see the point, but I was constantly hearing Da Ponte's beautiful Italian in my head. It's not, of course, that English is inherently ill-suited to being sung, but having the musical phrase that should open out into "contenta" end in "as I am" thwarts its emotional effect. And "Should my dear master want some diversion" just does not breathe irony and defiance like "Se vuol ballare, signor contino."

Among the smaller roles, Kelsey Peters made a sweet and sweet-voiced Barbarina. The Don Bartolo of Sanford Schimel enlivened proceedings whenever present, with some of the most stylish singing of the evening. Admirable comic timing and sharp diction made his Bartolo a likable relative of some of Gilbert and Sullivan's similarly pretentious protagonists. Cherubino--dear Cherubino--was endearingly portrayed by Erika Hennings. She was relaxed enough as a performer to communicate Cherubino's exquisite uneasiness well, and I was favorably impressed with her phrasing and coloring. I was a bit puzzled by the Count of Gregg Lauterbach, accurately sung, but never really threatening. This may be, in part, a matter of taste; I think the Count should be clearly dangerous as well as deluded. Cheryl Warfield was a sympathetic Countess, if somewhat uneven. She did bring a tear to my eye in her reply to "Contessa, perdono"; for this, of course, I am immensely grateful. Victoria Wefer, as Susanna, warmed up over the course of the evening. I thought her voice slightly hard-edged at the outset of the evening, but her "Deh vieni, non tardar" was truly lovely. Nathan Hull (who also directed) brought a warm, robust baritone and an amiable presence to the role of Figaro.

This production of The Marriage of Figaro runs through October 30th, with rotating casts; tickets are available here. Curtain call photos: 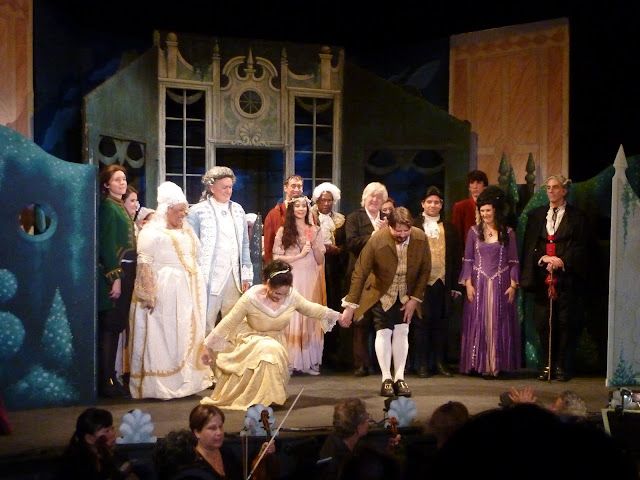 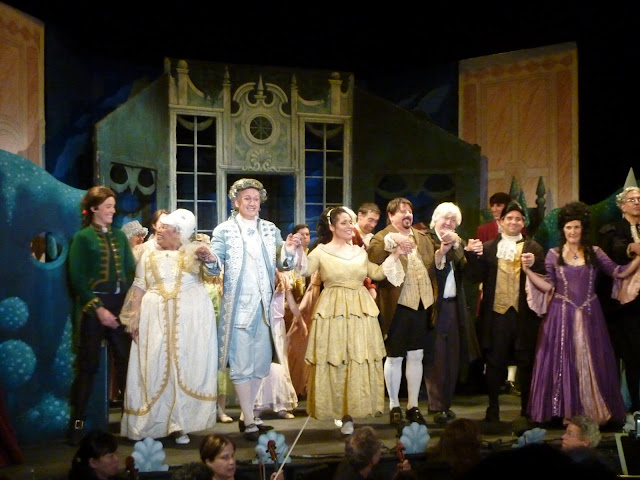 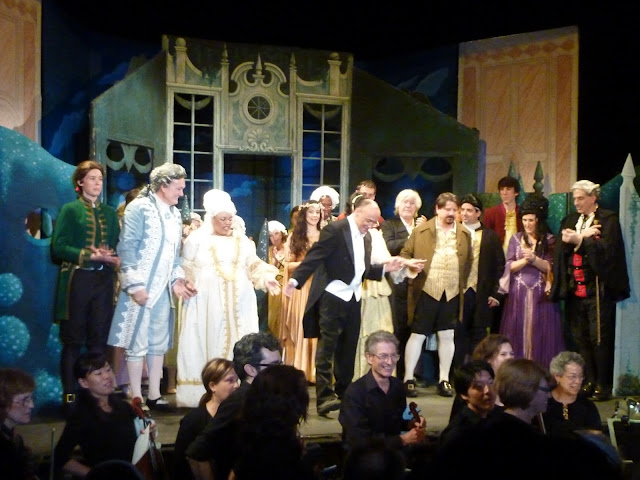