Whiskey per tutti! Fanciulla Centennial at the Met 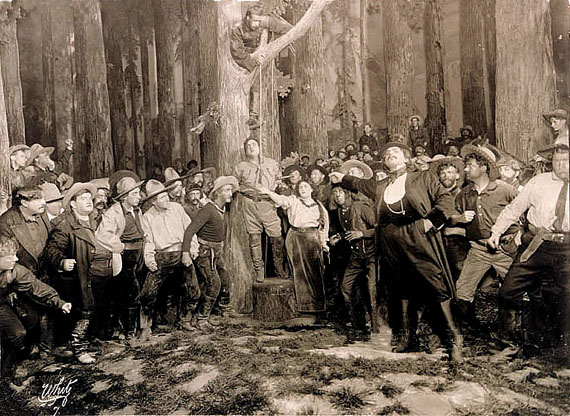 I admit, it took me some time to warm to Fanciulla.  When I first found the Tebaldi/Del Monaco recording

, in college, my sophomore self just couldn't get past California miners shouting "Hello! Hello!" and singing rousing choruses of "Doodah doodah day" in a Puccini opera.  The lexicon of John Wayne films meeting Puccini (and exciting, experimental Puccini at that) threw me for a loop.  But I kept listening (finding Corelli, Frazzoni, and Gobbi

along the way,) and I'm glad I did; I love the sweep of the music and its rich harmonies, and the drama keeps revealing more details.  So I was thrilled to have my first live Fanciulla one hundred years to the day from its premiere at the Met.  (There's a nifty website in honor of the occasion with all sorts of goodies--interviews, pictures, scholarly articles!--which I just discovered this week.)  I had some quibbles with the production, but Nicola Luisotti cherished the details of the score, the Met chorus made a great camp of miners, Marcello Giordani was a very sympathetic bandit, and perhaps most importantly, Deborah Voigt sang and acted Minnie with a commitment which made it clear that she loves Minnie, and believes passionately in her courage and its significance.


Giancarlo del Monaco's production is ultra-traditionalist, but thoughtful.  [Warning, Gentle Readers: I mull through this at some length, so if you're waiting for the singing, skip this paragraph!] The sets for Acts I and III are much as the libretto directs, while Act II adds the exterior of Minnie's cabin, with pine trees, rocky defile, and the edge of a paddock for the piccolo polledro (both Minnie and Johnson make their Act II entrances on horseback, which is one way of dealing with "horse opera!" snorting detractors.  It made sense--how else are they going to get there?--and gave Billy work putting the horses away. Apparently there is also a horse-drawn stagecoach which I couldn't see.)  Care had clearly been lavished on details and original touches.  I'm not sure that the embellishments and alterations always worked, though.  In Act II, there was a tendency to rush out into the snowstorm at emotional high points.  And in Act I, stage business for the miners often became too much of a potentially good thing, so that the verisimilitude-lending activities (for me) became a distraction rather than working to highlight the drama. The milling around in dusty clothing didn't help differentiate the characters, either.  Most puzzling were the brawl that erupted as a result of Sonora and Rance's dispute (were they taking sides?) and Johnson's lingering in the doorway of the Polka for the last chords of the act.  Act III, I thought, worked better, with the choice of a broken-out balcony as a gallows making Minnie's show down much more plausible.  A reluctance to mess with a woman on a small area of wood when she is holding a shotgun and screaming works better than the "Oh, she has Soprano Power; we must not touch" staging I've seen on ROH

DVDs.  It's after they take the shotgun away that she pulls out her own pistol (another detail which I thought did work.)  A disadvantage was that, from where I was sitting in Family Circle, I could not see Minnie's face (or Johnson's) during the first part of that dramatic show down!  Sad.  But the fierceness came through, and her hands on his shirt front were eloquent ("This man is mine, as he is God's...")  The choice of having the miners wander out after Minnie and Johnson, or vanish glumly into buildings, left Rance alone on stage.  He picks up a dropped pistol, and levels it at the oblivious lovers.  Eventually, of course, he drops it, and falls to his knees, his face contorted in an agony of broken pride.  For Lucio Gallo's high-intensity Rance, this worked... but I'm not sure what it was trying to do in the context of this staging.

Against this backdrop, then: the important part.  Nicola Luisotti's conducting brought out the delicate details that make up the sweeping whole of the score, with an attention to dramatic and emotional nuance (I think it's apt to speak of orchestral emotion in Fanciulla.)  It was an approach that struck me as meditative; even the most intense musical climaxes seemed more to be opening the considerations of the music's implications than than telling you what it meant.  (Opera Chic reports: he won an award; she also has a long interview where he talks about Puccini, among other things.)  The Met miners acquitted themselves well, with Dwayne Croft as a plausibly tough-but-heart-of-gold Sonora, and Tony Stevenson as a dramatically and vocally charming Nick.  Keith Miller used a big voice and big presence well as Ashby, the Wells Fargo man.  Lucio Gallo was a dangerous Rance.  Slender, he moved with predatory grace.  His baritone was burnished and elegant, and he shaped phrases with absolute confidence, dramatic subtlety not being at odds with going fearlessly for high drama.  I would not like to tangle with this Rance; I would love to hear Mr. Gallo again.

Seeing advertisements for the Marcello Giordani Foundation in the program, I was surprised to see Mr. Giordani beaming with avuncular amiability, because he brims with youthful ardor and energy on stage.  His Johnson/Ramerrez was both morally conflicted and persuasively charming.  He sang (and acted) with great sweetness; possibly the West's least dangerous bandit, and certainly a good man for Minnie.  Giordani's outlaw needs Minnie as much as she needs him, or more... and he knows it.  "Or son sei mesi" was brokenhearted rather than bitter; "Ch'ella mi creda" informed more by tenderness than despair.  The Beloved Flatmate and I are still trying to figure out what exactly is usually meant by italianità in the context of music criticism, but we are going with "that thing Marcello Giordani has" as a working definition: emotion, infused into the voice, that might seem over the top if you weren't a Puccini Tenor, but it isn't, because you are.  I was won over.

Deborah Voigt's Minnie, at the heart of the piece, carried the role largely by force of being awesome (to paraphrase Zerbinetta on Kate Aldrich's Carmen.)  My fears of choppiness were unjustified; Voigt did take a little time to fully warm up, and was occasionally not-quite-audible in the center of her range (due to flutter? due to balance issues?  I don't know; I do know that I want to be able to hear Minnie's desperate "Io t'amo!" in Act II.)  Still, I enjoyed her performance immensely.  An audio slideshow from the Met has more pictures than I've been able to find anywhere else so far, with the bonus of Voigt talking about the role.  Her love for it shows: she was radiant with conviction, and she and Giordani had excellent chemistry together.  From girlish sweetness in "Laggiù nel Soledad" to slowly blossoming happiness in Act II, followed by a marvelously steely resolve, she inhabited the role thoroughly.  The difference between her scenes with Rance in the first and second acts was, for me, a glorious character arc "aha!" moment.  His advances are greeted, in the first, with uncertainty, almost skittishness: she doesn't know how to handle his demands; this sensuality is strange to her, and she rebuffs it while doing her best to ignore its existence.  In the second, her defiant boldness is unflinching: he twists her arm and pulls her close to him... and she just stares him down.  Go, Minnie!  The orchestra during the poker game was amazing, and I was worked up to the point of having to suppress a cheer for "Tre assi... e un paio!"  Act III saw Voigt in tigress mode, ready to risk everything for the love that she has had the courage, and wisdom, to recognize for what it is.  Despite the oddly bleak ending tableau, it was Minnie and Johnson's happy ending that anchored the cathartic conclusion.
Posted by Lucy at 1:38 PM