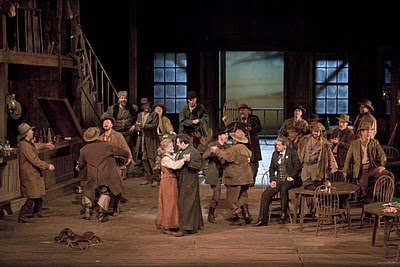 Last Saturday (18 Dec) I went with a friend to see Fanciulla a second time (photos (c) Ken Howard for the Met.)  The luxury of attending two performances in a run will probably remain rare (exception: next spring's Die Walküre.  The Beloved Flatmate and I have a date with the rush tickets line, I'm going a second time with another Wagner-impassioned friend, and my darling mother is going to try Wagner for the first time, mostly pour les beaux yeux de Jonas Kaufmann.  We'll see how that goes.)  But, back on topic, which is an extra post for Fanciulla, in the spirit of acknowledging the glorious, heartbreaking, thrilling fact that no two opera performances are the same.

Sitting in the balcony instead of family circle, I got a better view of some of the production's lighting effects, which worked nicely both to evoke the passage of time in this opera which is so shaped by it in the libretto, and to underscore the dramatic trajectory.  I am still bothered by the production's fussiness.  I saw more clearly this time why the bar brawl starts: I think it's touched off by an inebriated fellow at the bar. I still don't think it makes a lick of sense (to borrow the idiom of the genre.)  And I really dislike the fact that Minnie is made to brandish her Bible in Act III.  I think it takes away from the celebration of how unexpectedly disruptive the transformations effected by transcendent moral pronouncements can be.  A few touches were altered: Nick's handing a Havana cigar to Johnson/Ramerrez at the end was more subtly handled, and therefore more sweet than distracting.  And Rance, in that final tableau, picks up Minnie's pistol but doesn't level it at the lovers, rather staring at it like a man who has lost his bearings, then sinking to his knees, devastated.


On the vocal front, Adam Laurence Herskowitz and Michael Forest stood out from the group of miners as Harry and Joe, respectively.  Herskowitz brought touching lyricism to Harry's solo in the melancholy "Che faranno i vecchi miei?"  Dwayne Croft, as Sonora, sounded richer and fuller of voice on Saturday than he had on the 10th. Lucio Gallo sounded a bit lean and dry.  I stand by my review of Friday's performance; I was deeply impressed; but he didn't meet his own high standard on Saturday (though I didn't think he deserved the "Disastro!" shouted by one disgruntled soul in the Family Circle after "Minnie, dalla mia casa son partito.") 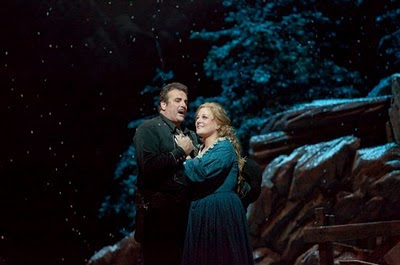 Deborah Voigt's love for Minnie is plain; in her hands the character is fully rounded, fully believable, and fully likable.  But Saturday's was a somewhat uneven performance; I fretted through the first act.  Whether she had been saving herself, or got over some initial difficulty, Act II was delivered with dramatic verve and vocal punch, perhaps even stronger than in the 10 Dec performance.  But I still found myself saying "Whew!" instead of "Ah!" after successfully nailed high notes and boldly shaped passages.  She carried the final scene of Act III with beautiful and touching conviction.  Voigt is an artist I admire, and enjoy rooting for (and Minnie is, without a doubt, a role the considerable challenges of which are ill-appreciated by the listener.)  I just wish I could relax and uncross my fingers.  For your own appreciation, Gentle Readers, here is the poker scene from the Dec 6 performance.  Voigt and Marcello Giordani really do have a rare and delightful level of chemistry with each other.  Watching them is simply a treat.  Giordani has a big sound which is felicitously coupled with musical sensitivity.  If anything, he surpassed himself in subtlety of phrasing, as well as ringing Puccini Tenor Heroism. In "Ch'ella mi creda," he triumphed over the circumstance of being parked center stage for the big number, and created a desolate, beautiful tribute to love-about-to-be-lost, heartfelt and heart-wrenching.

Finally, the orchestra, under Nicola Luisotti, bettered excellence.  While I appreciated the delicacy and attention to detail of the 10 Dec performance, Saturday's performance struck me as realizing more successfully the dark, ominous qualities of the score.  (This may be partially an issue of me-as-listener, but I love Fanciulla and I was listening/hoping for ominousness all along, so I don't think it's just that.)  The details were not sacrificed; small groups of strings and winds both impressed.  But there was also real bite to the dark harmonies, accentuating the precarious nature of the miners' existence, and the fragility of the happiness that Minnie and Johnson reach for. I was privileged to have a second chance to encounter this rich score in a masterful treatment.
Posted by Lucy at 11:34 PM