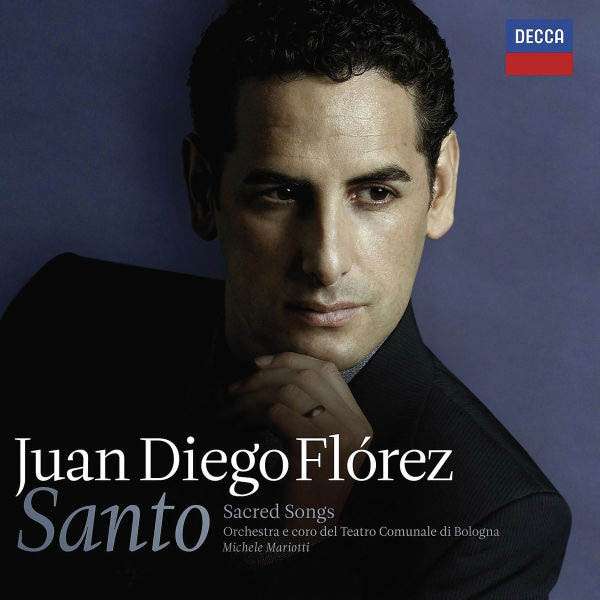 Now that it's almost Advent, I can listen to Christmas music with a clear conscience.  And this year, I decided to start things off with something new: Juan Diego Florez' new album

.  The commercial inevitability of "the Sacred Music Album" is something Florez jokes about in the liner notes; but he's succeeded brilliantly in putting together an interesting program.  Comparative rarities appear alongside familiar favorites, with an original composition thrown in: all of it beautiful music that plays to Florez' strengths.


Things are started off with a brazen (sorry) display of vocal fireworks in the "Alleluia" from Johann Fux' Plaudite, sonat tuba (see, I told you it was a pun.)  "Panis Angelicus" and "O Holy Night" are sung with such beauty that they provoke the response "Oh, that's really lovely, isn't it?" rather than "Oh, that again."  (And Florez has beautiful sung English.)  Another familiarity is Adeste Fideles... sung in Latin, German, and English.  Our friend Bellini is here too, unfamiliar music, predictably excellent.  Schubert's Ave Maria, more predictable, is also excellent.  (Did you know that it cannot be sung in church in Italy, because it is technically secular music, coming from a setting of Walter Scott's Lady of the Lake?  I did not, until Professore Palombo who owns the coffee shop told me.) Handel's Messiah and Haydn's Creation make up the oratorio quota nicely (a few mild idiosyncrasies of German pronunciation didn't bother me.)

A new-to-me offering was the gorgeous Kyrie from Ariel Ramirez' Misa Criolla.  Maybe it was the effect of the choir on this piece, but it virtually conjured up an incense-filled cathedral; I loved it.  Rossini is generously represented with three tracks (no complaints here) including my nomination for the most cheerful "Qui tollis" ever, from the Messa di Gloria.  Florez' own composition, Santo, which gives the CD its title, was a surprise to me in several ways.  According to the liner notes, composition is a hobby of his (perhaps something which will occupy what he apparently plans as a fairly long retirement.)  Second surprise: Peruvian inspiration without, in my opinion, self-conscious folksiness.  This is just full of joy: syncopation, a guitar-like instrument, familiar and unfamiliar percussion, and one or several wood flutes (no orchestration notes, so this is my best guess.)  Also, it was sung in Spanish and Quechua, which I thought was pretty neat.  In sum, this CD surpassed my expectations, uniting many different styles of music in a creative program.
Posted by Lucy at 10:54 PM