In the wise words of the Beloved Flatmate, "Gender in opera is never NOT problematic."  In addition to recording

and libretto perusal, I prepared for last night's Opera Outing by looking through essays with the trained scholar in me chanting "Problematize! problematize!" and some other part of me saying "...Happy Mozart?"  Everyone starting with the New Grove Guide to Mozart

notes Così's history of being labeled as one of Mozart's "weaker" operas, and the problematic, clearly temporary nature of its "resolution."  (For me, this doesn't seem terribly exceptional: I always want to know what happens after the curtain falls.  If there's anyone left alive, that is.)  An essay in Jean Starobinski's Enchantment: The Seductress in Opera

(did someone mention problematic gender in opera?) persuasively argues for the significance of the setting of Naples, noting the Neapolitan tradition of opera buffa with its stock characters, and the recurring sea and volcanoes of the libretto.   I read about the Enlightenment and social and theatrical sensibilities (as well as the use of key structure to indicate falsehood and sincerity) in Andrew Steptoe's  The Mozart-Da Ponte Operas.  A chapter in Jessica Waldoff's Recognition in Mozart's Operas

(how could I not read a chapter entitled "Sense and Sensibility in Così fan tutte"?) argues that


"the opera's representation of sentimental experience [is forced] to divide against itself.... One has the sense that here as nowhere else in Mozart the lieto fine is a compromise with neither the characters nor the audience can be entirely comfortable.  In its resistance to the reconciliation recognition brings, Così remains true to sentimental experience."

It also remains problematic.  I threw up my hands and went to the opera.


Lesley Koenig's 1996 production, while it didn't unpack the issues of the opera, did at least acknowledge them through flaunted artificiality.  The Albanian uniforms (and a camp stool for the distressed Fiordiligi during "È amore un ladroncello") are pulled out of a trap door.  Despina, while complaining about how hard she works, tugs the sisters' house on stage.  The sea beyond Naples is cerulean, the sun blindingly perfect, the sisters' garden symmetrically ornamental.  The chorus, and the sisters, are dressed in candy-floss pastels.  It's all right, says the production, we know.  Pictures from its 2005-06 iteration may be found here.  The production did seem to present the lovers' journey as a maturation process: Dorabella, in "Ah! guarda, sorella!" is discovered playing with a toy boat on the shore of that cerulean sea; the sisters' protestations of grief, despair etc. are often tantrum-like; and Guglielmo and Ferrando tease and congratulate each other by turns with a roughhousing, schoolboy familiarity, treating Don Alfonso more like a respected/resented tutor than a friend.  I want to see more (and more problematic) Così productions, but this found a not-too-uncomfortable place between straight "traditionalism" and explosions of Regie, a middle ground the potential existence of which I had doubted.

The singing was uniformly strong, buoyed by William Christie's conducting, which created a sound at once full-bodied and sprightly.  I know I'm woefully ill-equipped to pick out orchestral inadequacies, or pinpoint what exactly makes a performance superlative... but I do know that a performance of this caliber gives me some sense of what I may be often missing.  The entire orchestra was in on the joke, expressing irony as well as, where appropriate, melting sentiment or simple youthful high spirits.  Isabel Leonard was a supple-voiced Dorabella, somewhat self-consciously reveling in both her girlish playfulness and the newly-discovered canniness of the second half.  "È amore un ladroncello" was very persuasive.  She and Miah Persson had good rapport and sang and acted beautifully together.  Miah Persson's Fiordiligi visibly took herself and her world Very, Very Seriously.  I could imagine her reading novels full of Noble Heroes and Virtuous, Possibly Self-Sacrificing Heroines.  The prompter's box was often used as a platform to "stage" the characters' dramatic emotional moments (that knowing artificiality again), never more effectively or humorously than for "Come scoglio."

Fiordiligi and her Guglielmo, Nathan Gunn, had an intense chemistry which served them very well (the Beloved Flatmate dubbed them "Team Pretty," for conspicuous reasons.)  Nathan Gunn has a flexible and ingratiating baritone and simply overwhelming quantities of personal charm, both of which were deployed with great intelligence here.  His Guglielmo was emotionally credible and sympathetic (yes! even sympathetic! I lose Feminist Points.)  The dreaded paper slip of cancellation in the program announced the substitution of Bruce Sledge for Pavol Breslik, who was ill.  The difficulties of stepping into a work which is so musically and dramatically dependent on its ensembles did him a disservice; it would be unfair to censure him for dramatic stiffness.  He has a nice warm sound, with more "heft" than I had expected from a Ferrando, though I would have liked more emotional and dramatic shaping to his music.  His voice also seemed to lose a lot of tension after getting through "Un'aura amorosa."  Under the circumstances, it was a very creditable performance.

The representatives of sense more than held their own with those of sensibility.  William Schimell's Don Alfonso had a focused sound and fine diction which made him one of the more intelligible singers of the evening.  He used Sprechgesang effectively, especially in the opening scene.  Don Alfonso's wry amusement and chronic exasperation came across very clearly, in a performance which struck me as felicitously achieving musical and dramatic integration.  Danielle de Niese, as Despina, achieved something like a personification of pertness.  (Fiordiligi's and Dorabella's hilarious incredulity at the suggestion that this maidservant might have beaux has surely rarely seemed more misplaced.)  I always enjoy her bright soprano, and she sang with her customary agility and expressiveness, but her powers as a comedienne were a revelation to me.  I do not know how my life was complete before watching her wield an over-sized magnet with mock solemnity as the Doctor, or squawking Latin and listing her (very clearly spontaneously-invented) linguistic accomplishments as the Notary.  Her accomplished turn went a long way towards helping me turn off the voice saying "Problematize!"

One final note on a curiosity of the production: reading the libretto myself, I found myself attracted by the temptingly tidy possibility of having the conclusion come with the lovers ending in "opposite" pairs, the worldly wisdom of Don Alfonso having seen through conveniently, naively pursued relationships to factors accounting for true compatibility.  But when this actually occurred last night, it came as a confusing shock.  I did not feel that the rest of the production set this up at all.  Firstly, there was the fairly straightforward reading of the plot (with the added element of acknowledging its artifice), and secondly, I thought the stage direction was working with admirable diligence to suggest the genuine affection behind these relationships that we only see topsy-turvy.  The young men, as Albanians, instinctively start to woo their respective sweethearts, and are redirected by Don Alfonso; in the seduction scene of Act II, genuine jealousy and anxiety were manifested.  And, as previously mentioned, Team Pretty had really great chemistry.  So the glumness of the girls at the first resolution (original pairings,) and the relief and joy of all concerned at its reversal, seemed forced.  It's not an interpretation I'd be opposed to, necessarily.  But I felt as though I had been groomed for the original ending, and then deprived of the (problematic) emotional payoff I had been promised.  Still, it would have required far more resolution than I possess to resist being charmed by this cast, especially with the venerable, energetic Christie in the pit. 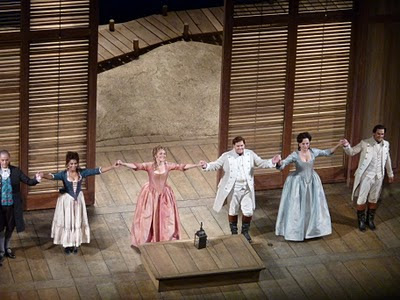 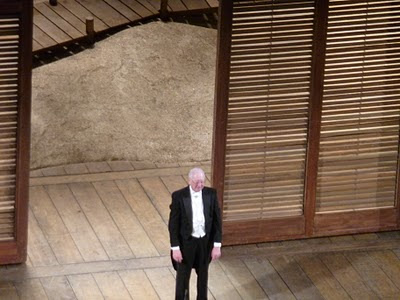 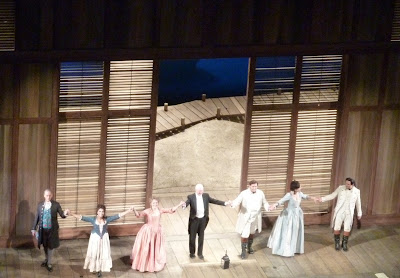