Arrigo Boito's under-performed Mefistofele seems to be enjoying a revival of sorts (there's a run in San Francisco and an upcoming concert performance at Carnegie Hall.) It also served as the stirring season opener of the Staatstheater Mainz, where I've just basked in its gloriously ambitious romanticism. Mainz boasts a strong cast, and a production where unexpected coups de theatre build emotional as well as dramatic suspense. More production photos can be found here, but they convey only a fraction of what actually happens on stage. The singers worked well together, as well as exhibiting individual commitment, and the cumulative effect was quite impressive. Boito's Gesamtkunstwerk is filled with the deliberately anarchic, the musically unexpected; that it all adds up to an intriguing, exciting whole is not the least of its surprises.

Lorenzo Fioroni's busy, carnivalesque production is far more coherent in concept than the visual overload--props! scrims! video! text! theaters within theaters!--at first led me to expect.  I'm still not quite sure why Helena led a tour group of retirees, but it worked in context. What looks like a simple setup turns out to have more layers and different meanings than expected. The "god" of the carnival stage is an aging stoner-hippie. The angels are women in extravagant heels and tiny sequined dresses, as well as false wings: a parody of a parody. What we think we're going to see (the devil as magician) is not what we end up getting. The quickness of the hand deceives the eye. Correcting the first impressions conveyed by wandering planets and off-stage choirs, the geniality of Mephisto presents magician-as-devil, rather than the other way around. He gets his kicks from entertaining the carnival audience, smoothing down fights instead of starting them, lighting cigarettes from his fingers, sparks of pleasure that glimmer like those of joy, of hope. Faust is (logically enough, given his portrayal in the libretto) a drug addict looking for augmented experience. I was sure Mephisto was just humoring him with claims of supernatural ability... until he pulled off his shirt to reveal the unhealed wounds where his wings had been torn away. He's uncanny, maybe dangerous, definitely incalculable (and very charismatically portrayed by Hans-Otto Weiß.) The opera's treatment of Margherita as passive victim was cleverly handled: she is just a doll, conjured from a box, Faust's delirious ideal vision of womanhood. That she can't respond to him as a full human being is (for him) one of her virtues. From a matching properties box, Mefistofele summons Marta, who acts the other side of this imagined feminine: the whore, as false as the virgin. When Margherita reappears, she's a fragile, hard-edged survivor who treats Faust with the cruelty she's learned. As events progress, it becomes clear that Mephisto has chosen a poor pupil in the self-obsessed Faust, whom he tries repeatedly to convince to direct his efforts towards others. (And the libretto is taken at face value, here: it is Faust's selfishness which plunges the pair into disaster.) Mephisto himself is disillusioned enough that he sees little difference between a love duet and a magic trick. But if the people are happy...! Even in the ruins of his theater, he is trying to escape being viewed as an object; to instead be the elusive and independent performer who delights and disappears. In the end, his attempts to make Faust a partner in resisting the tawdry organization of a selfish "god" are in vain. All others are passive, and his means of independent existence are taken away.

The drama of the ultimate individualist, however, could not have succeeded without strong ensemble work. Hermann Bäumer led the Staatsorchester Mainz in an energized performance of the score, rendering effectively the great variety of Boito's orchestral colors. The ominous brass were especially impressive. There were a few sync problems between pit and stage, but overall, this was a stirring account of Boito's carefully created illusion of anarchy. The role of Margherita, unusually, was shared, making the incongruity of her post-Walpurgis reappearance a pointed commentary on the idea of the "ewig Weibliche." Tatjana Charalgina was a fine Gretchen, her clear soprano schooled to give nothing but the desired responses, her inflection carrying nothing but naïveté and emotional availability, until the terror of the moment when Faust literally sets her body aflame. Vida Mikneviciute made a strong impression as the second Margherita, conveying fragility through movement and voice alike. "L'altra notte" was a bitter indictment, "Lontana, lontana" a bittersweet reflection on a fantasy she knows all too well is impossible. Significantly, Faust refuses for most of their shared scene to interact with her, preferring to pore over the relics of their past, constructing his own narrative.

The evening's Faust, Gaston Rivero, gave a physically energetic and vocally solid performance. Faust's weakness of will, his constant, restless searching for distraction, were believably characterized, making the moments of lyrical reflection which he is given poignantly incongruous. Faust's arias may give voice to his better self, but their impulses never last long. Rivero's tenor is unusually dark-hued, with prominent squillo, capable of great tenderness; I found "Se tu mi doni un'ora di riposo" especially effective, but Rivero was also strong in the scenes with Margherita (I and II.) Appropriately, however, Mefistofele was easily the center of the evening. Hans-Otto Weiß grabbed attention from the moment he strutted loose-limbed onto the stage, and kept it with the skillful deployment of a sonorous bass-baritone. Good diction as well as nuanced acting supported his multifaceted portrayal of the underdog with all the best lines. Weiß effectively used both dynamics and vocal coloring to convey Mefistofele's pride, his humorous cynicism, his fierce defensiveness, and his fear. The great Walpurgisnacht monologue, "Ecco il mondo," is presented as his low point of near-despair, denying the sycophantism, the cynical profit, which the witches (genuinely scary clowns) insist on offering him. Faust he indulges, not without contempt. He tries to protect the younger man, but can't sympathize with him, until the final scene, where he touchingly spreads a corner of his shirt around his shaking shoulders: the nearest he can come, now, to taking him under his wing. In the well-ordered vision which Faust joins, however, there is no room for the reprobate whistler. The would-be protagonist of his own story is carried off stage like a property-master's dummy, to a triumphant chorus. 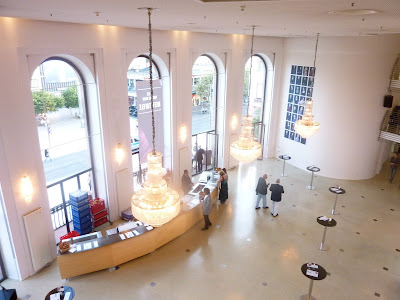