The scenario of Verdi's Vêpres siciliennes, with pervasive corruption and radical resistance (and doubts about what forms resistance should take) is only nominally medieval; Verdi moved the action from the 16th century to the 13th in order that the opera might safely serve as a political rallying cry in his own day, and the twentieth and twenty-first centuries have certainly offered all too many instances of similar oppression and violence. The music is itself permeated by this violence. Although written in the Meyerbeerian tradition of grand opera, the unsettled, unsettling orchestration and structure are unmistakably Verdi's own. The opening chords foretell no good; in this production, a gunshot proceeds them, explaining the foreboding. This deed is done in silence and darkness; but as it turns out, it is not (only) a characteristic abuse of power. When the thugs have gone, men and women of all ages materialize, at first singly and then in greater numbers, to furtively lay candles and flowers at the site of the murder. The photograph pinned above these tributes is that of Helene's brother, the murdered Frederic. (I give the French names, as Die Sizilianische Vesper was here given in its original language.) The production of Jens-Daniel Herzog for Oper Frankfurt sets the narrative amid Germany's own political upheavals of the 1960s and 70s; the turning points of the action, like the psychological states of the characters, are always attuned to what's going on in the orchestra. I personally found that Herzog's production made me more alert to the tensions among the revolutionaries, and to the musical representations thereof, than I'd been in previously listening to the piece. The political background never becomes more clearly defined than it is by Verdi and Scribe, but thanks to strong ensemble work and good relations between stage and pit, the emotional and psychological narratives of the piece were vividly realized.

Giuliano Carella conducted the opera's orchestra with a firm hand, and did a very effective job of communicating the often schizophrenic shifts in mood. Hearing the work live for the first time, I was more strongly struck than ever before by the wild variety in orchestral color and textures. I think part of its apparent strangeness is caused by the encounter of Verdi's mid-century sensibilities (Les vêpres siciliennes had its Paris premiere in 1855) with the grand opera form that was designed to accommodate very different sensibilities. At times the orchestra seemed loud for the singers; but my position close to the pit probably affected that. The brass and winds, under Carella's direction, were especially good at conveying an appropriate ominousness: the Act II deliberations of the resistance movement were particularly striking. The revolutionaries themselves were well-sung. Nina Tarandek, despite having little music, made a strong impression as Ninetta, here an idealistic student; Danieli was her adorable philosopher-nerd boyfriend, sung by Hans-Jürgen Lazar. It is to their credit as well as to that of the production that each of them had a nuanced, evolving relationship with the violence of the events in which they are caught up.

As the firebrand Procida, Kihwan Sim did well in portraying a man whose idée fixe was born of ardor, not aridity. His sonorous bass-baritone, while tending towards monochromaticism, was deployed with good phrasing and sensitivity to text. Sim's ability to gradually reveal the dangerous narrowness of Procida's vision made the denouement all the more chilling. Quinn Kelsey gave a brilliant, multifaceted performance as the tyrannical Guy de Montfort. Vocally and dramatically he conveyed real vulnerability and tenderness, as well as the ruthlessness and power-lust which have become habits so deep that they have formed his character. In the early ensembles, it was easy to believe in his admiration for Henri's courage; in those following on his great Act III aria, "Au sein de la puissance," the dangers of his own self-image as the holder of absolute power became increasingly clear. He prides himself, indeed insists, on giving as favors what the people still under his control demand as rights.

In the role of the traumatized, passionate Helene, Elza van den Heever was never less than compelling. At the very outset I had a little trouble hearing her at the low end of her register, but whether this was an issue of warm-up or of orchestra balance, it was soon corrected. She displayed a wide dynamic and dramatic range, as well as impressive stamina, in conveying Helene's anger, her zeal, her hope, and finally her despair. Her own emotional state was clear in ensembles as well as in more direct interactions, and she broke my heart in the final acts, with a radiant "Ami! le coeur d'Helene" (better known, to me anyway, as "Arrigo! ah, parli a un core") and a profoundly uneasy "Merci, jeunes amies." Helene's efforts to forge a path between Henri's capitulation and Procida's violent uprising founder on the men's more narrow vision, and she is wounded by the realization that the man she loves will sacrifice any ideal to his desire for her. Burckhard Fritz sang with a strong, bright tenor, and only exhibited symptoms of vocal fatigue at the very end of the evening. Although consistent in ardor, he didn't make the impression of the other leads; perhaps this is in part the fault of the role. Henri seems to substitute the index of his own feelings for a moral compass, disappointing everyone in the process, and contributing no small part to the tragic outcome. As Frankfurt's staging made very clear, no one can remain undamaged by a violent attempt to solve the problems of a violent system. 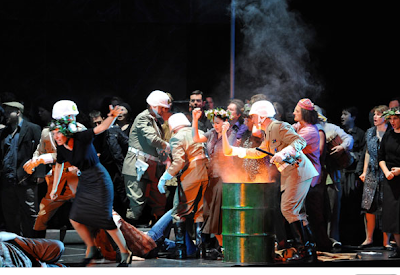 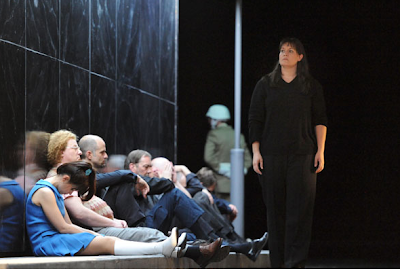