The Manhattan School of Music's senior opera showcase was, this year, devoted to eighteenth-century box office king Giovanni Paisiello's "Nina."  Thither, accordingly, having found out about this via La Cieca's invaluable NY opera calendar, I went.  There's a promotional video here for the Cecilia Bartoli headlined production from Zurich in 2002, which has totally enchanted me via YouTube (you may recognize the tenor as well.) There was another production at La Scala under Muti with Antonacci in the title role, but the work, while it may be 'rediscovered,' has a long way to go to repertory.  Zachary Woolfe has an article in the New York Times where he briefly outlines and considers Nina's relation to her mentally unstable sisters in the operatic repertory.  Unfortunately unfamiliar with the music (I haven't managed to connect with that Bartoli DVD

yet) I joined an audience of family, friends, and faculty (the latter including Catherine Malfitano, in a fabulous purple wrap) for an enjoyable foray into an opera which seems to deserve to be less of a rarity.  Update: Greetings, deluge of readers looking for a Nina review!  If you were involved with the performance, thanks again.  Whoever you are, thanks for stopping by; I hope you enjoy. 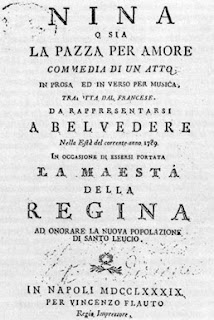 For a quick synopsis of Nina's less-than-logical plot, go here.  The MSM gave it in an efficient semi-staging.  While I was (predictably) intrigued by the psychological trauma and the patriarchal oppression, the overall approach emphasized the charm of the piece... which does, after all, have a chorus of peasants and the subtitle commedia.  There's a lot more than that in there, though; see section II of this piece by Diane Hoeveler, and note that this episode of a count's social prejudices wreaking havoc had its premiere in 1789.  Anyway: the chorus of peasants, called upon to dance merrily, did so, in addition to singing as sympathetically as any afflicted protagonist could wish.  The dialogs were given in English, although the opera was sung in Italian.  There were a few moments where an echo lost some drama through translation, or impassioned outbursts sounded, well, just a little silly, but on the whole, this bothered me far less than I thought it might.  The audience seemed quite engaged, saying "aww" at all the right moments.  I'm not going to give a detailed musical critique; the overall level was high enough that I enjoyed myself.  David Charles Tay was a very pleasing Lindoro, with sweet, expressive singing and plenty of youthful ardor.  The real standout for me, though, was soprano Ilana Goldberg, who sang Susanna, Nina's loyal confidante.  She had remarkably sweet, secure sound, and gave, I thought, a beautifully integrated performance, entering into the work's emotion while avoiding overstatement.  All in all, I was very pleased with my night out, and my experience of Paisiello; Nina's charming melodies and more-thoughtful-than-it-first-appears plot would seem to well justify his erstwhile fame.
Posted by Lucy at 8:25 AM