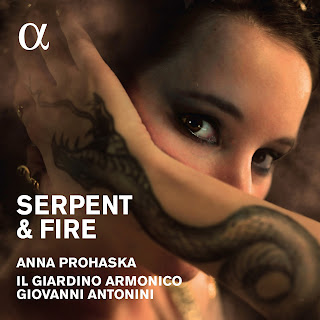 I've been fascinated with Anna Prohaska since this came out several years ago. Her latest album, Serpent and Fire, displays a similar flair for the theatrical, and still more range of vocal color. The title alludes to two great queens of myth and history, Dido and Cleopatra; the disc explores how they were characterized on the operatic stage. I had never before considered the fact that these two larger-than-life figures proved so popular in early opera, and now I can't stop thinking about it (or listening to the CD.) The brief essay accompanying the disc--on the different operatic styles developing in the seventeenth century, and their different approaches to portraying the queens--argues that there is "nichts von das Ewig-Weibliche" in this popularity; this may be an excessively optimistic assessment. True, the queens are very different from each other. Moreover, as the disc showcases, the ways they were dramatically and vocally characterized could vary widely. Still, I find it suggestive that these two powerful and alluring queens of myth/history were so frequently staged at a time when state power, as embodied by the rulers of Europe, was threatened, redefined, and (to a considerable degree) gendered male. What did it mean to show these queens conquering and conquered? I've written elsewhere about the uses of Anne Boleyn as romantic heroine; it strikes me that a similar (more scholarly) investigation into these questions would be warranted. Prohaska's musical exploration is very welcome, covering three languages, two different settings of a Metastasio libretto, and showcasing her impressive range of vocal technique and emotional expression.

The organization of the album is, in my view, not the least of its strengths; it is opened with an energized and vivid account of the overture to one of the most famous operas featured: Purcell's Dido and Aeneas. This is but one of the solely instrumental pieces performed--with great vigor--by Il Giardino Armonico. The ensemble's subtle and vivid playing, full of theatrical effects, is one of the great assets of the disc. Interestingly, several of their other selections are taken from operas showcasing other magical realms: Purcell's The Fairy Queen and Matthew Locke's The Tempest, the latter an exciting new discovery to me. Purcell's Dido and Aeneas bookends the other arias. Dido's famous lament caps the disc, as it only could; Prohaska is introduced in the much less frequently excerpted "Ah! Belinda, I am pressed with torment," with a particularly poignant reading of the line "Peace and I are strangers grown." The next incarnation of Dido is as the confident queen of a civilized people, from Christoph Graupner's Dido, Königin von Karthago. Cleopatra is introduced in "Non voglio amar," a sparking display of vocal fireworks from Sartorio's Giulio Cesare in Egitto. Here and elsewhere, Cleopatra is the more tempestuous of the two queens, ardent alike in love and in defiance.

Perhaps surprisingly, given their respective destinies, Cleopatra seems to spend more time than Dido lamenting her lot... and yet much of her grief sounds not so much like self-pity as like a condemnation of the world that has failed to obey her commands. This is particularly apparent in Prohaska's intensely committed and impressively multifaceted rendition of Cleopatra's death scene as imagined by Daniele da Castrovillari. There is something passionate even in her resignation, as in the elegantly ornamented "Se pietà di me non senti," which also points up Handel's gift for individualized expression. Other highlights include "Agitato da tempeste" from Graupner's Dido, an extended, ecstatic exploration of competing desires. Equally impressive is Cleopatra's defiant "Morte col fiero aspetto" (Hasse.) Prohaska ornaments it with apparent fearlessness, superb in every respect. I enjoyed the album thoroughly, and have done so repeatedly. I'd love to see more such boldly themed recital discs... to say nothing of a Dido- and/or Cleopatra-themed opera festival.
Posted by Lucy at 5:19 PM