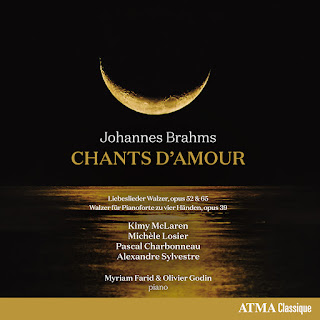 Summer weather is beginning to transition into that of fall, which means it's time for me to transition from French to German art songs as my default listening of choice. Perfect for this lazy, enchanted, in-between period has proved a new recording of Brahms waltzes, here identified as Chants d'Amour. Inexplicably, I have struggled in the past to come to grips with the Liebeslieder Walzer, but this rendition was light and seductive, yet not without its core of seriousness and melancholy. (If a song cycle doesn't have a core of melancholy, I'm rarely interested.) Here, Op. 52 and Op. 65 bracketed the four-hand waltzes of Op. 39. It doesn't feel overstuffed or overlong as an album; tempi are often faster than I've heard elsewhere, without feeling rushed. I found the collaboration of the musicians impressive throughout.


The performance felt like a cohesive, elegant whole, rather than the production of a chance-encountered collection of soloists. Myriam Farid and Olivier Godin provided lucid and sensitive piano-playing throughout. Variations in dynamics and tempo felt organic rather than forced, providing interest and helping to define the shape of the cycles. I appreciated the rich variety of romantic expression Farid and Godin found, from brio to wistful reflection. The singers, too, were accomplished in this regard; all Canadian, they all sang with excellent German.

The bright, flexible soprano of Kimy McLaren led stylishly. Predictably, though, I was specially delighted by the multifaceted mezzo of Michèle Losier. I found myself repeatedly and pleasantly surprised by Losier's incisive use of text and the depth and nuance of her vocal coloration. Pascal Charbonneau provided a sweet-toned tenor and notably lovely phrasing. His partnership with baritone Alexandre Sylvester on "Sieh, wie ist der Welle klar" was a particular delight. "Wenn ich ein hübscher kleiner Vogel wär" was another highlight, performed with charm, grace, and an eminently danceable tempo (yes, I tested it.) The potentially kitschy "Am Donaustrande" was given with welcome subtlety, and a seductive lilt. "Nein, es ist nicht auszukommen mit den Leuten" was also very satisfying, with both bite and humor. The dreamier and more melancholy Neue Liebeslieder Walzer were no less thoughtfully crafted; McLaren's and Losier's "Nein, Geliebter, setze dich" was a favorite. The album is highly recommended; preferably for listening to with a Riesling and nothing particular to do.
Posted by Lucy at 10:30 PM