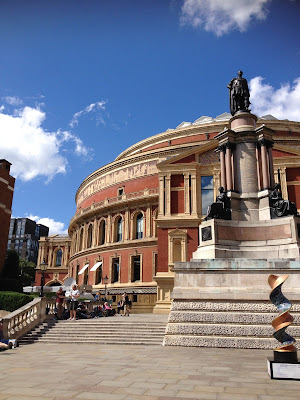 My summer, as you may have suspected, Gentle Readers, was mostly spent in libraries, pursuing the Ph.D. which seems to take up more time the further it progresses. But! under the good influence of Zerbinetta (recently reporting on Bregenz, for those indulging in vicarious opera-travel or planning their own) I was pulled away from my desk and up to London for a gorgeous Sunday afternoon. My experience of the famous queue was enjoyable and fairly low-key. Arriving in mid-afternoon, we took our seats on the stairs, were eventually given numbered slips marking our appointed place, and were instructed not to be absent for more than half an hour at a time. As at the Met, and perhaps as in any opera queue (cf. Benzecry's anthropological study

) official staff were joined, and sometimes challenged, by line regulars in the enforcing of good order. But it was all very pleasant, and rather less hectic than I'd expected. (Picnicking highly recommended.) Later in the afternoon, the queue became longer and more anxious, but everyone seemed to get in. Once packed in the arena, it became somewhat difficult to struggle out in the interval, as those standing sat down... but despite suffering from mild claustrophobia, I was never uncomfortable. And the concert itself? With Andris Nelsons leading the magnificent CBSO in the music of my beloved Beethoven, it was a treat indeed.


Our view was fabulous. The acoustics were less so (the concert can still be listened to here, in controlled quality.) Buoyed by good fellowship and good music, I enjoyed myself enormously, but found myself wishing that the acoustic conditions were more conducive to appreciating the detailed work of the orchestra, and the text of the 9th Symphony's final movement. Beethoven's final symphony was of course the main event of the evening, but the first two pieces on the program were treated with delicacy and creativity by the musicians. "The Creatures of Prometheus" was given a lively reading, light and joyous, and--in contrast to some versions I've heard--not at all pompous or excessively stately. John Woolrich's contrabassoon concerto (!), Falling Down, was in company that would dwarf virtually anything. I was impressed by the musicianship and the humor (and the very stylish pantsuit) of soloist Margaret Cookhorn. She played the contrabassoon with more subtlety than I would have guessed that instrument to be capable of expressing. Still... I found the descending scales of the brief piece to be excessively long for an undeveloped musical idea. If there were layers to the piece reaching beyond this, I missed them. I did think, though, that I would have enjoyed it in my Mary-Jane-wearing, children's-concert-attending days, and I love the idea of including more contemporary music in children's concerts. So perhaps the piece has an ideal audience in those most likely to be fascinated by how very, very low the contrabassoon can go.

I do not take lightly the responsibility of adding to the sum total of words written about Beethoven's 9th, and shall, therefore, be brief. Excerpted, the piece can be used as a cliché. But it can also be extraordinarily powerful; it is, I would argue, a masterpiece that can stand any amount of over-saturation. (And I do have a personal favorite pop culture use of it.) In Nelsons' hands, it sounded vigorous, fresh, even surprising, as Nelsons led the orchestra in a detailed and bold performance. Rather than merely relying on the arc of the piece as a whole, Nelsons and the CBSO brought out the energy and drama of individual phrases. Sweeping crescendos were given their due, but seemed more powerful for being built from smaller things. Unexpected emphases delighted me... as, indeed, did Nelsons' expressively kinetic conducting. The CBSO chorus deserves much credit for being intelligible as well as passionate in their glorious ushering-in of the finale. (They also deserve credit for being present throughout the concert, without a murmur.) The soloists, standing behind the ranged orchestral forces, were unintelligible to me when singing together, and I even had some difficulties when they were on their own; I ascribe this to my placement, more than to theirs. Even without the German Consonants I always listen for, the coming together of soloists, chorus, and orchestra carried its visceral thrill... a genuinely joyous experience.
Posted by Lucy at 6:32 PM