The opera season and the academic year are hurtling towards their respective conclusions, and so, although I got to see David McVicar's new production of the Cavalleria Rusticana/Pagliacci pairing on the 18th, it is not until now that I am organizing my ramblings. I'm glad to have seen the productions, welcoming the change from their rather dusty predecessors. Having read publicity advertising the fact that the two operas would be set in successive generations in similar southern Italian settings, I was expecting an exploration of destructive ideals of masculinity. But--despite this apparent gesture towards exploring commonalities and continuities--the productions were surprisingly different from each other in visual and dramatic style. Paradoxically, I found the bright, crowded, insistently specific Pagliacci much more effective in presenting the opera's underlying themes than the dark, curiously opaque stylization of Cavalleria Rusticana. The singing in both casts was fine, although Marcelo Alvarez, playing what must be two of the operatic canon's most unsavory tenor roles, was curiously lacking in brutality or charisma. For me, at least, it was Santuzza and Nedda--powerless in their yearning--who emerged most vividly in vocal and dramatic terms. 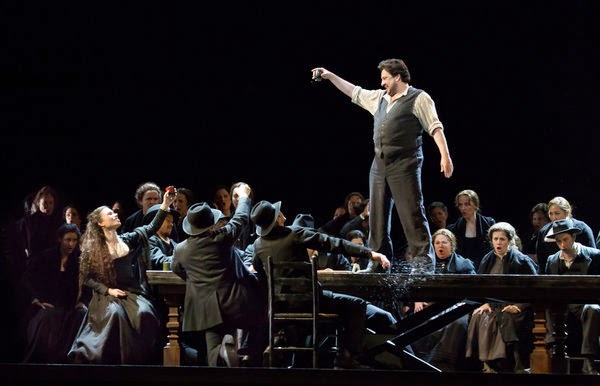 The concept and choreography of Cavalleria seemed similarly vague, and left me dissatisfied. Ritualizing Cavalleria Rusticana might work, but turning a story driven by very specific psychological and social forces into something allegedly atavistic, an acted-out myth only dimly understood by its participants, flattened the drama. I did like the image of the communal table that was also a stage, dramatizing the fact that to participate in the life of this village is also, inevitably, to invite its judgment (Santuzza, significantly, stands alone here during the prelude.) Although the chorus goes through the not-very-specific motions of community, Santuzza seems to be the only character who actually believes in mutual responsibility, to say nothing of the profound and sublime joy of the Easter chorus. Santuzza has faith in the possible usefulness of apprising Mamma Lucia of her plight; of appealing to Turiddu's better nature; of apprising Alfio of Lola's public infidelities. But none of these actions has any constructive result. Even the men's mutual defiance is a ritual that neither appears to believe in. (This could be made dramatically effective, as in Effi Briest, but I didn't feel that it was.) Musically, matters were more felicitous. Fabio Luisi led the orchestra in an admirably energetic and detailed performance. I appreciated the extent to which Luisi brought out the dark orchestral textures, and dug into the complexity of individual moments, though more could have been done with overall momentum. As Lola, Ginger Costa-Jackson gave an assured performance, and used her physical presence well. George Gagnidze, as Alfio, started out with a slightly rough opening aria, but gained in nuance of dynamics and tone as he warmed up. In the unsympathetic role of Turiddu, Marcelo Alvarez as Turiddu sang with lovely tone and very fine diction throughout. Still, I wished that I had felt any sense of conviction, or desperation; instead, he waved his arms emphatically, an unfortunately durable cliché of operatic gesture. The Santuzza of Eva-Maria Westbroek was a standout, warm-hearted and warm of tone. Her intonation was occasionally wayward at the beginning, but she had beautiful and big sound, and used the phrases well, her performance the only larger-than-life thing in the opera.

After the interval, we returned to find the slightly shabby magic of vaudeville, fronted by a blue velvet curtain, spangled with cheap stars. The entire production was noisy, active, and gloriously vulgar. The demands of the prologue that we dismantle prejudices to see common humanity can be too easily taken for granted, in an opera that has become perhaps too-comfortably absorbed into the canon... but here, I was inveigled into despising Tonio for his double-breasted and sequined suit jacket, his excessively brilliantined hair. I was shocked at myself, delighted with the production. The choreography here was as specific as that of the preceding opera seemed generalized. One of its greatest strengths was the establishment of good chemistry among the members of the troupe, as well as good individual characterization. I felt that vaudeville antics were out of place in the prologue, when Tonio is attempting to establish precisely that we are not to identify the characters with this... but breaking down porous boundaries between high and low art, was one of the things that the production accomplished most effectively. This may be partly due to McVicar's wickedly, brilliantly accurate assessment of the Met audience. This is an audience that will applaud scenery. This is an audience that will laugh at cheap sight gags. This is an audience that will do those things even when the real drama of Pagliacci is gathering its terrifying momentum. And it did. The effect was, ironically, chilling in the extreme. 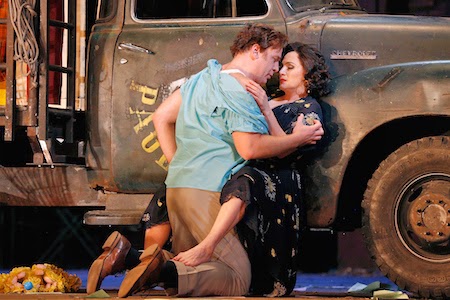 The cast was strong all around, including the engaging Harlequin of Andrew Stenson. Stenson displayed vocal and physical charm, with a pleasing, bright tenor and a good stage presence. Also impressive was the sonorously sung Silvio of Lucas Meachem. Meachem's smooth baritone was deployed elegantly, and for once, I actually believed that Silvio was possessed of sufficient charm, and perhaps even sufficient character, to make him attractive to the vibrant, imprisoned Nedda. Patricia Racette was--for me--heartbreakingly gorgeous in the role of this woman whose affections have not become warped or stunted despite being so consistently thwarted and dismissed by the world around her. Racette was a vivacious presence, showing Nedda both as an effective professional, and as a complex character. Even her resigned willingness to present her own charms as a commodity (cf. Der Blaue Engel) angers the remarkably obtuse Canio, but in private, she is warm, forthright, remarkably resilient. It must be clear by now that Racette's was a remarkably rich dramatic performance; this was achieved not least through technically solid and emotionally nuanced singing, especially in her aria and duet with Silvio. George Gagnidze, as Tonio, was credibly malevolent without descending into caricature. His fine diction and use of text made the role of the fool that one with significant dignity, and presenting realistic danger... a danger more palpable, indeed, than that of the less intelligent head of the troupe. As the fatally jealous Canio, Marcelo Alvarez gave a perfectly respectable performance, which I nonetheless failed to find engaging. Perhaps this is in part due to the production's presentation of Canio as a rather ineffectual, rather stupid drunkard. Alvarez seemed vocally underpowered, to me, for the portrayal of a man who forms the resolve to murder, finding himself only afterwards on the verge of madness. The tragedy unfolded credibly enough, but I found myself wishing, as the curtain was rung down, for a greater sense of its implications.
Posted by Lucy at 6:49 PM