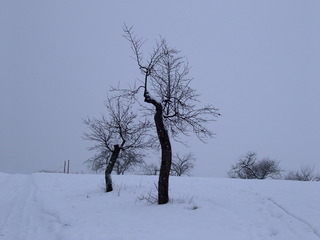 When I got off the Frankfurt subway on Tuesday night, the lady in front of me was carrying a well-used score of Der Winterreise under her arm. When I gained my seat for the evening's performance of Schubert's great song cycle, the music student next to me was frowning anxiously at the marginalia in his score, while the two elderly women behind us were happily quoting and humming snatches of the cycle to each other. For this educated and expectant audience, Johannes Martin Kränzle, ably partnered by Hilko Dumno at the piano, gave an interpretation of unusual dramatic vividness, creating emphasis in unexpected places and in unexpected ways. I was fascinated to be shown new things as Kränzle led the audience along the wanderer's snow-covered paths.

Kränzle's interpretation of Winterreise was unabashedly theatrical, bringing the rich text out of each emotional moment, letting Schubert's writing itself carry the fateful echoes. Emotional emphasis emerged in phrases that came across as deeply felt and fresh. Integral, I think, to the success of this approach was that Kränzle and Dumno performed the cycle as a Gesamtkunstwerk avant la lettre (which I believe it is… certainly they made a great case for it as such.) The piano and baritone seemed to speak with one voice; the voice of the piano seemed to be the voice of the traveler in scorn and in despair, in weariness and in febrile hallucination. The landscape appears in the piano too, of course, but the landscape as seen. Dumno played with legato romanticism, providing a consistent foundation of sound, sometimes visibly breathing with Kränzle, forming the text; always in partnership.

The opening of the cycle was comparatively restrained, almost reserved. Anger begins to emerge, but tenderness is still a warming memory for the traveler who shuts the door softly, softly. The sarcastic bitterness of "Die Wetterfahne" emerged all the more strongly in contrast. Still, the disappointed lover's search for some souvenir is frenzied, genuinely longing, if tinged with the awareness of self-deception. Kränzle used dynamics boldly, with anguish expressed in bitter piano singing or sudden, hall-filling forte with power to burn; subtleties of vocal coloring and text were also at his command in shaping the cycle's arc. The famously excerpted "Lindenbaum" was here both nuanced and dramatic. "Auf dem Fluße" brought a turning point, emphasizing the traveler's apostrophizing (half-mocking and entirely agonized) of his heart. The specificity with which Kränzle evoked physical realities--of will-o-the-wisps, the traveler's uneasy rest, the etching of frost on the window--made the images all the more powerful as metaphors. Rather than an expression of desire, the despairing "Wann halt ich mien Liebchen im Arm?" functioned as an acknowledgment that all is over.

Even as the inevitability of the journey's end becomes clearer, the experiences of the traveler gained in intensity. Kränzle pained with bitter irony the delay among the sleepers, brought a sense of terrifying epiphany to "Der stürmische Morgen," when the traveler sees in the cold, wild winter a reflection of himself.  The unflinching clarity of "Der Wegweiser" brought the cycle's final turning point before a brilliantly feverish "Wirtshaus," the fey recklessness of "Mut," the final hallucinations which lead into darkness, into the imagined music that dies into silence. The Frankfurt audience was so reserved in its stillness that I wasn't sure what they made of all this; but after a long moment of respectful silence, they erupted at the conclusion, applauding vociferously and long for Kränzle and Dumno, the former visibly moved. After several minutes and the fifth bow, the two musicians put down their flowers and brought out sheet music. "It's a difficult question," said Kränzle; "what can one give as an encore after that, really?" His choice was "Der Wanderer," in a deeply introspective mode which contrasted strongly with what had come before, while the Lied's meditation on solitude and Sehnsucht seemed an entirely fitting conclusion.
Posted by Lucy at 5:09 PM