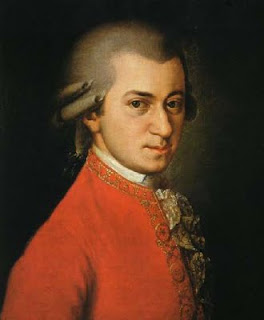 Iván Fischer, in a recent interview, offered the following paradoxical definition of Mozart's work: that it lies beyond categorization. This might seem closer to platitude than analysis, but I found myself pondering it as I reflected on Tuesday night's performance. Sacred or secular? Transcendent or exuberantly earthly? Under Fischer's baton, the Mostly Mozart Festival Orchestra approached Mozart's music without an ounce of false reverence, and created a thoroughly involving performance. This was my first time hearing the "Ave verum corpus" in a concert hall. Fischer waited for the audience to settle into (relative) silence before beginning. The orchestra and singers from the Concert Chorale of New York gave an inward, passionate performance. It may be a piece of less than five minutes' duration, but it's a gem, and I was grateful that it wasn't tossed off as a prelude to the body of the concert. (It's one of my favorite "Music at Communion" pieces.) Fischer kept his baton raised to preclude applause, and the organ played during the choristers' withdrawal. We were allowed a few moments of silence and refocusing for the magnificence of Symphony No. 41.

For magnificent it was. Fischer led with unflagging energy (I couldn't help but grin, watching his enthusiasm,) and the orchestra responded in kind. The first movement was propulsive without seeming too weighty, the different sections playing off each other delightfully. Its energy built steadily to the climax; again, a generous pause preceded the transition into the andante. Here, too, I felt the orchestra found the fullness of emotion at the heart of the movement without over-indulgence or caricature. The third movement was splendid without being excessively stately, the contrapuntal glories of the fourth were magnificent, celebratory, festlich... and the whole was more than the sum of its exquisitely composed parts.

I confess to not knowing the Vesperae Solennes de Confessore well; on this hearing, the work seemed to me a gorgeous example of Mozart's talent for making a piece a stronger example of its genre by pushing that genre's boundaries. Fischer led the orchestra in a detail-rich account; tempi were brisk, but not rushed. The Concert Chorale (directed by James Bagwell) contributed confident, responsive singing. The soloists (Lucy Crowe, Helen Karloski, Brian Dougherty, and Scott Wheatley) not only contributed fine individual work, but the colors of their voices blended very nicely in their ensemble passages. This was my first chance to hear Crowe live, and I was most impressed. She had sweet, secure sound, and exhibited impressive control in the agile coloratura demanded by the "Magnificat" as well as the more lyrical, more famous "Laudate Dominum." The triumphant "Amen" was a joyous affirmation. We applauded heartily, and were sent out a little more hopeful than we arrived.
Posted by Lucy at 4:07 PM