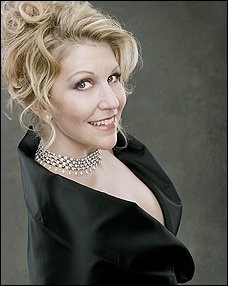 In one of the charmingly chatty intervals in which Joyce DiDonato enthusiastically filled her audience in on the background of the music she was singing, she speculated with a chuckle that, had her academic specialty been vocal performance instead of music education, and had she proposed beginning a recital with Haydn's "Scena di Berenice," the proposed project would have received failing marks.  However, on Sunday afternoon, not only did she start with this, she did "Tanti Affetti" as an encore.  In between were songs of Cecile Chaminade, more lovingly-sung Rossini, a new Jake Heggie cycle, and a smattering of serenades.  I was boggled by the ambition of this, but DiDonato sailed through it all with a smile as stunning as her technique.


The hall was respectably full, although not packed; I'm tempted to blame the 2 p.m. start time for this, as I had to hustle breathlessly down from church... and I am both in the city and in a short-sermon ecclesiastical tradition.  The Baptists were still going strong as I ran past en route to the subway.  But I digress.  Before I leave inessentials, though, Wardrobe Committee take note: for the first half she wore this dress (I am not sure the bustle needs to be reinvented, even for divas, but she wore it with panache.)  In the second half, this was replaced by a strapless, close-fitting affair in dark rose silk, figured, I think, with roses as well; this suited her very well indeed, and the post-interval applause had a certain something in it which acknowledged the fact.

The Haydn was sung with expressive dramatic commitment, and the audience was impressively silent for the duration, perhaps shocked by tragic delirium at two on a Sunday afternoon.  After this we applauded and were welcomed.  "This is as crazy as I'm going to get," said DiDonato.  Shucks, I thought.  Next was a set of salon songs by Rossini; DiDonato inhabited sensual flirtatiousness in the first and amorous adolescent melancholy in the second.  "Le dodo des enfants" is, despite the title, a dark yet tender account of a mother's fears for an infant's health... teetering on the edge of sentimentality, perhaps, but there was enough real danger in the music that I was moved.  The "Chanson de Zora," by contrast, was a colorful set piece of gypsy insouciance.  A set of gorgeous, atmospheric songs by Cecile Chaminade was preceded by an elegant and impassioned introduction of Chaminade and her work.  In the hands of DiDonato and David Zobel, these pieces emerged as multifaceted, harmonically rich while remaining conceptually focused.  Here as elsewhere I was enormously impressed by the many different colors Zobel was able to bring out of the music; his playing was admirably subtle, but also sparking with energy.

After the interval came more Rossini: Desdemona's willow song.  DiDonato's timbre itself is not what I would describe as complex, but I thought her instinct for communicating the emotional heart of each of the pieces was spot on.  Poor Desdemona's lonely, wistful prayer was greeted by a moment of audience hush - a nice change from the rowdy habit of applauding after each song in a set.  (I thought that was Not Done; am I somehow outmoded?)  Fortunately, Zobel and DiDonato kept the music in Jake Heggie's introspective Breaking Waves flowing without a hint of opportunity for such applause.  The poems by Sr. Helen Prejean were written as potential texts for the cycle, and selected by Heggie.  I thought the first two songs of the cycle, "Advent" and "Darkness," were the most successful in finding a moving unity of text and music to make more than a sum of the parts.  The ambivalent mood of "Music" may have been intentional; I'm still puzzling over it.  "Return," describing a surfer waiting for a wave, a soul waiting for God, was a gorgeous text, leaving me only wishing for more joy radiating from the music, preparing me for DiDonato's soaring "Alleluia."  But ask me what I think of the cycle again in six months.  For now, my short answer is: I liked it a lot.  And I loved that DiDonato called Heggie from the audience to the stage to share applause (and hugs.  My camera battery died, or I would have a slightly illegal picture of mezzo-composer hugs.  Believe me, it was cute.)

To let us all get our breath back, DiDonato offered an insouciant handful of sexy serenades, from Arturo Buzzi-Peccia, Leoncavallo, and Vincenzo di Chiara.  On the last named, "La spagnola," DiDonato relaxed into gloriously over-the-top delivery, with swaying hips and mock-castanets, vamping the audience wildly, and even turning her confident coloratura into a bit of a musical joke.  With everyone, then, in a giddily good mood, there was a roar of applause which earned nothing less than "Je suis gris," from Massenet's Cherubin, as an encore.  It's on her new CD

, and you should all go buy it right now, if for that song alone.  I literally gasped at those first, floating notes.  "That's just a little something," said DiDonato.  If that counted as 'a little something,' I asked myself, what could the 'real' encore be?  DiDonato settled the audience down for Tanti Affetti with a moving explication of its significance... and then sang the juice out of it.  My metamorphosis from eager audience member into awestruck fangirl was complete.  And then, in response to still more applause, she gave "Somewhere Over the Rainbow" with a winning sincerity and simplicity, sending us out with a rainproof glow.
Posted by Lucy at 12:09 AM