On Wednesday I ventured down through a fine snowstorm to secure rush tickets for "La Fille du Regiment"; what better way to celebrate being snowed in than by going out to the opera? Having seen the production once before with Florez and Dessay (Vienna 2007), I was most excited to see and hear Diana Damrau live at last. I was not disappointed: the vocal fireworks of the part, while not heavily ornamented, were completely solid, and her characterization was fearless, extending to sobs and shrieks of pique or delight. She charmed the house, and developed Marie's character touchingly over the course of the evening. At this point in Juan Diego Florez's career, enough is said when it is said that his ardent Tonio did not disappoint. (And if you somehow have missed hearing his Tonio, go here now to see the role's vocal centerpiece in the Met/ROH/Vienna co-production which is finishing up at the Met this week.) I never fail to be drawn in by his energy on stage, and he and Damrau made an irresistible duo. 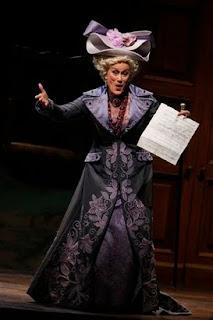 While the past few evenings at the opera have been enjoyable, the mastery of Florez and Damrau put this on another level. While the comedy of the production as a whole tended to be rather broad for my personal taste, it was carried off with irresistible finesse by these two, as well as by none other than Dame Kiri Te Kanawa, whose Duchess of Krakenthorp swanned in, bossed maidservants, checked the furniture for dust, vamped the conductor... and then sang. I am still trying to find out whether the lilting flirtation with which she held the house spellbound was a zarzuela or fado, or something else entirely. Either way, I feel immensely privileged to have heard this grande dame fill an opera house with utterly confident sound. If the evening had a weak point, I would be tempted to locate it in Meredith Arwady's Marquise of Berkenfield, whose acting smacked of caricature and whose lamentable French accent marred a vocal performance which was, otherwise, quite sound. However, I still found it to be a winsome interpretation of Donizetti's delightful opera (did I mention I found it delightful?) Many bravos well-deserved bravos went to Maestro Marco Armiliato for his energetic and sensitive work on the podium, where he seemed to be having at least as much fun as everyone else, and contributed no small part to the charm of the evening (did I mention I was charmed?) I like a bit of cathartic emotional devastation as much as anyone, but it was a treat to have a thoroughly light-hearted night at the opera.
Posted by Lucy at 8:20 PM